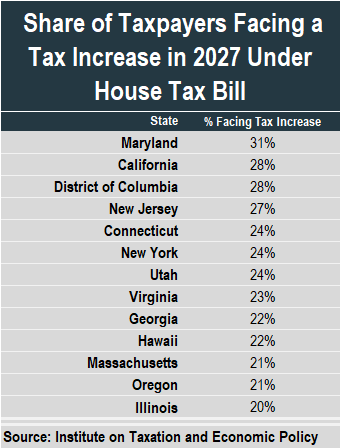 In a story published yesterday evening, Politico reported that House leaders have been “working to create customized data models” to show lawmakers that their constituents will not face a tax increase under the tax bill being debated in the House. On this point, House leaders have taken on an impossible task. At least five different tax policy models—including those maintained by the official scorekeepers at the Joint Committee on Taxation as well as at ITEP, TPC, Tax Foundation, and AEI—have been used to analyze the plan already, and all five are in agreement that some taxpayers will pay more if the bill is enacted.

To distract from these findings, House leaders are trying to make the $10,000 property tax deduction in the bill—added at the request of House lawmakers from states such as California, New Jersey, and New York—appear more consequential than is actually the case. According to Politico, Rep. Tom MacArthur (NJ) is now likely to vote in favor of the House bill because of data showing that most people living in his district deduct less than $10,000 in property taxes per year and thus, in theory, their property tax bills would remain fully deductible. But this finding reveals almost nothing about whether his constituents will be able to deduct their property taxes in practice and, more importantly, about whether the plan is a good deal for his constituents overall.

Much of this sharp decline can be explained by the fact that nearly 1.8 million New Jersey households would no longer be able to write-off their state income or sales taxes on their federal tax forms, as these deductions would be repealed entirely under the bill. As a result, many people in New Jersey and elsewhere would pay higher taxes, including the people with deductible property taxes of less than $10,000 that Rep. MacArthur has been led to believe are being treated favorably under the bill.

Despite having property taxes that could potentially be deducted under the House bill, many of these taxpayers would not deduct those taxes in practice because the combination of itemized deductions they are allowed to deduct (which would no longer include state income and sales taxes) would be smaller than the standard deduction. This would be a worse deal than current law for many taxpayers even though the House bill makes the standard deduction more generous.

Politico describes the House proposal to repeal income and sales tax deductions but keep a $10,000 property tax deduction in place as a “middle-ground,” but this is not an accurate description. Nationwide, ITEP estimates that the overall amount of state and local taxes deducted each year would plummet by 88 percent under the House bill, from $645 billion to just $78 billion—hardly an example of meeting in the middle.

The fact that the state and local tax deduction would be slashed under the House bill is central to understanding why New Jersey is among the top three states (behind only Maryland and California) in which a high percentage of taxpayers would face a tax increase under the House bill. We estimate that 12 percent of New Jersey residents would see their tax bills rise next year, with that figure growing to 27 percent by 2027.

After seeing House leadership’s “customized data models,” Rep. MacArthur stopped describing the $10,000 property tax deduction as “too low” and instead called it a “huge win” that “covers nearly everybody in my state and in my district.” But for most taxpayers in New Jersey and around the country, the property tax deduction will remain out of reach. Fixating on the dollar amount of property taxes that can be deducted misses the bigger picture of how the House bill, taken as a whole, would impact taxpayers who claim itemized deductions today. It appears that these “customized data models” being circulated by House leaders are doing a lot more to confuse the debate than to inform it.