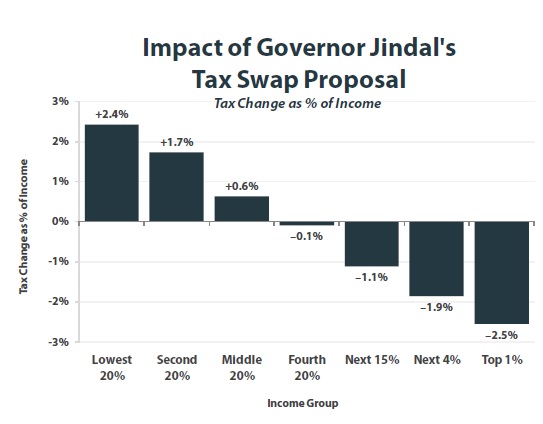 t weeks, Louisiana Governor Bobby Jindal has released many details of the tax plan he first sketched out in January. The Governor proposes a revenue-neutral “tax swap” that would repeal all state income taxes and increase the state’s sales tax among other changes. A new ITEP analysis of the Governor’s plan shows that, if fully implemented in 2013, the plan would increase taxes on the poorest sixty percent of Louisianans overall, while providing large tax cuts for the best-off Louisiana taxpayers.

What Governor Jindal’s Plan Would Do
The centerpiece of the Jindal plan is the outright repeal of the state’s personal and corporate income and franchise taxes. These tax cuts would be paid for primarily by increasing the state’s sales tax. The sales tax changes would include increasing the state tax rate from 4 percent to 6.25 percent, and expanding the base of the tax to include a wide variety of previously untaxed services and goods.1 Many, but not all, of these previously untaxed services would be paid initially by businesses rather than individual Louisianans. Governor Jindal also proposes to create two new “rebate” programs designed to help offset the impact of the sales tax increases on low-income families and seniors.2 Lastly, the plan would increase the state’s cigarette tax by $1.05 per pack, hike other tobacco taxes, and increase severance taxes.

Governor Jindal has indicated that the plan is designed to be “revenue neutral” overall, meaning that the plan would not change the overall amount of taxes collected by the state, and has also signaled his intention to ensure that low-income families will not see tax hikes under the plan.

This analysis includes the impact of the proposed tobacco tax increases, which would hit low- and middle-income families much harder than the other components of the plan. But, as the detailed table below shows, this general result holds even if the tobacco tax hikes (which would obviously have no impact on the majority of Louisianans who don’t smoke) are excluded from the analysis. While the net tax increase on the poorest sixty percent of Louisianans would be smaller absent the tobacco tax hikes, these groups would still see a net state tax increase overall.

Assessing the Jindal Administration’s Claim that All Income Groups Would Benefit
The Louisiana Department of Revenue (LADOR) has published tables purporting to show that Louisianans at all income levels would see a net tax cut under Governor Jindal’s proposed tax swap—a claim that is obviously very different from the results of ITEP’s analysis. The LADOR analysis apparently includes only the impact of taxes paid directly by individuals, and ignores the impact of taxes paid initially by businesses. This approach presents a very incomplete picture of how the Jindal plan would affect Louisianans. This is because a substantial share of the state sales tax is initially paid by businesses—and because economists generally agree that these business sales taxes are ultimately passed on to consumers in the form of higher prices. In fact, when LADOR‘s Tim Barfield testified on behalf of the Jindal administration, he admitted that “you’re going to have some costs passed along to consumers” if Governor Jindal’s proposed sales tax increases are enacted.3 A complete analysis of the Jindal plan’s impact must account for the way these business sales taxes are passed through to consumers—and this is exactly what ITEP’s analysis of the Jindal plan does. An analysis that simply excludes these passed- through taxes, as the Administration’s analysis apparently does, will dramatically understate the impact of sales tax increases on low-income families.

Conclusion
Governor Jindal’s tax plan has been described by its advocates as a revenue-neutral “tax swap” that would provide tax cuts for Louisianans at all income levels. But because the plan’s tax increases would fall so heavily on businesses, a complete analysis of the plan’s tax fairness impact must factor in the way in which these business sales taxes are passed through to individuals. ITEP’s analysis shows that, under the uncontroversial assumption that these sales tax hikes are passed through to consumers, the net impact of the Jindal tax swap would be a tax increase for the poorest 60 percent of Louisianans overall, and a net tax cut for the best-off 40 percent of Louisianans.