The House Democrats have plenty of ideas to help workers and families and boost the economy, but Speaker Nancy Pelosi’s recent idea to repeal the cap on deductions for state and local taxes (SALT) is not one of them.

The 2017 Trump-GOP tax law includes many provisions that should be repealed. Unfortunately, Congressional Democrats have long made it clear that they want to start by repealing the $10,000 cap on SALT deductions, which is one of the law’s few provisions that restrict tax breaks for the rich.

As explained below, the last time the Democrats attempted a version of this that was “tailored” to benefit the middle-class, their proposal nonetheless provided more than half of its benefits to the richest 1 percent.

This was a bad idea before the COVID-induced economic crisis, and it is a particularly bad idea as a response to the current situation because it would not aid families who need it most.

The Cap on SALT Deductions

The TCJA provision in question limits state and local taxes (SALT) that taxpayers can deduct on their federal income tax returns to $10,000. The majority of people with SALT in excess of $10,000 are relatively well-off taxpayers in states with higher-than-average state and local taxes like California, Maryland, New Jersey and New York.

When Republicans drafted TCJA, they could have included any number of reforms to restrict tax breaks for the rich to offset the cost of their new tax cuts. Instead of doing this in a comprehensive and rational way, the only significant provision they included to restrain tax breaks was the cap on SALT deductions, which seems to target residents of “blue” states.

The cap on SALT deduction is, therefore, not ideal policy. But repealing it alone, without other changes to the law, would only make a bad situation worse because it would result in even bigger tax cuts for the rich.

A spokesperson for Pelosi said that any such change would be, “tailored to focus on middle-class earners and include limitations on the higher end.”

There is no way of knowing what that means exactly, but the last time the House Democrats suggested something similar they passed a bill that repealed the SALT cap and offset part of the cost by repealing TCJA’s cut in the top income tax rate from 39.6 percent to 37 percent.

Given the current makeup of Congress and the current president, we assumed that this could never be enacted and go in effect earlier than 2022. We estimated that the Democrats’ proposal would cost $81 billion for tax year 2022 and 51 percent of that amount would go to the richest 1 percent of taxpayers. (The analysis also includes a link to download state-by-state numbers.) 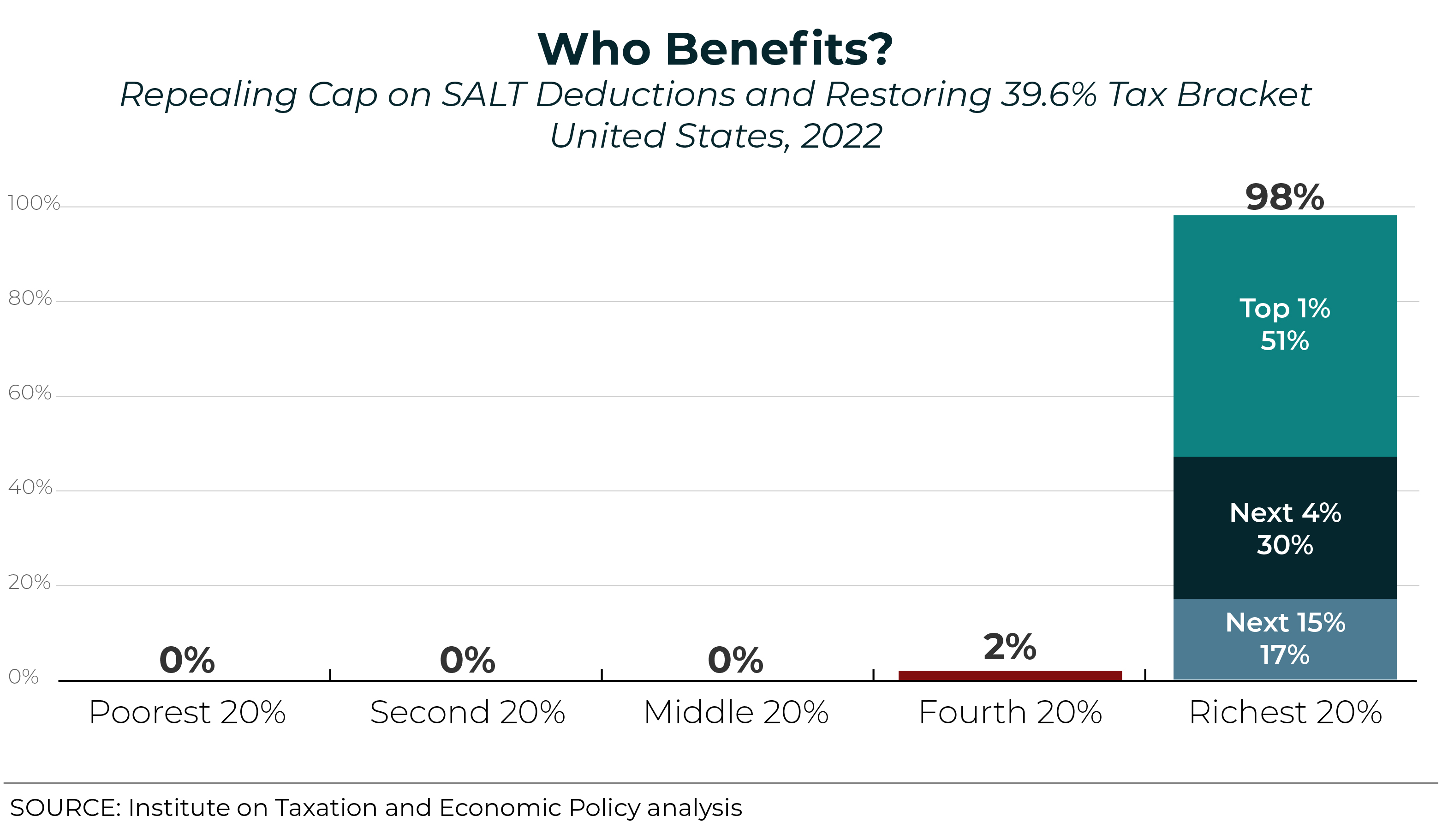 In other words, even when the House Democrats attempted to restrict the cost and net benefits going to the rich, their last proposal to repeal the SALT cap still directed more than half of its benefit to the top 1 percent.

It is difficult to see how any proposal to repeal the SALT cap, without broader changes, could be much better.

The Democrats Have Already Proposed Something Better

Speaker Pelosi has far better options for delivering emergency and longer-term relief to those hit hardest by the current crisis, including the bill she proposed just a week ago.

ITEP’s analysis of the COVID-19/stimulus legislation released by House Democrats last week found that its proposed rebates of $1,500 per family member (for up to five family members) would be better targeted and more assured to reach those most impacted by the economic downturn than the rebate that was in the final stimulus relief package or any changes to the SALT cap.

The Democrats’ proposed rebate would be more straightforward because checks would automatically be sent to everyone, and those whose incomes made them ineligible would simply pay back the benefit on their tax returns over the following three years.

The House Democrats have plenty of ideas to help workers and families and boost the economy. They do not need to cut taxes for the richest 1 percent.