House Tax Plan Will Keep 39.6% Top Rate, But That Won’t Matter for Most Types of Income Going to the Rich

In recent days, news that House tax writers will not seek to cut the top personal income tax rate below 39.6 percent on taxable income above $1 million has led some to question whether the newest iteration of the Trump-GOP tax plan will provide a major windfall to the wealthy—a fact that has so far been widely understood. Unfortunately, this second-guessing is unnecessary. While the top statutory tax rate is likely to remain at 39.6 percent under the House proposal, other components of the plan would allow the nation’s wealthiest taxpayers to avoid paying that rate on most of their income. In other words, while House lawmakers appear to be backing away from a wildly unpopular cut to the most visible tax rate paid by wealthy taxpayers, they are still pursuing a less transparent, special set of rules that would ensure most types of income earned by the rich would never face that rate. This goes a long way toward explaining why a recent ITEP analysis showed that keeping the top tax rate at 39.6 percent for incomes over $1 million will not fundamentally alter the Trump-GOP tax plan’s regressive impact. 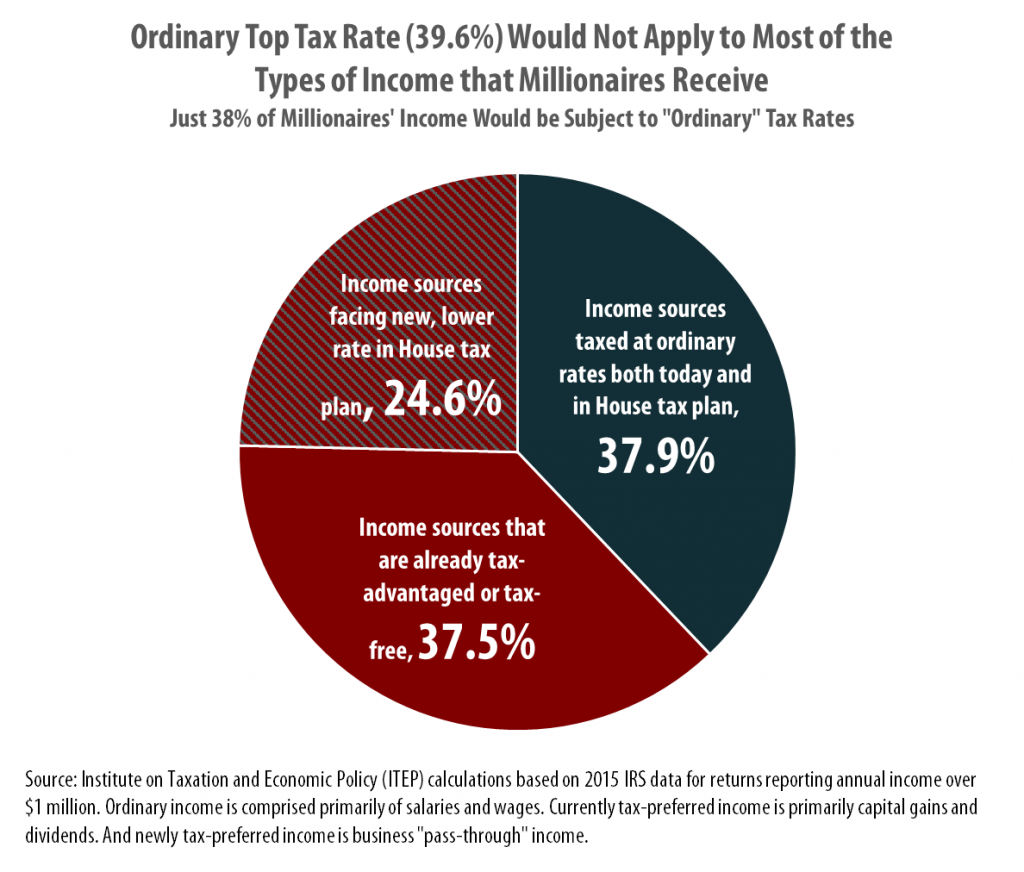 To understand why this is the case, it’s important to realize that not all types of income are treated the same way under federal tax law. For most people, the most familiar type of income is a salary or wage, which is currently subject to “ordinary income” tax rates ranging from 10 to 39.6 percent. In total, salaries and wages account for just under 70 percent of Americans’ incomes, so these rates are extremely important in determining the overall revenue yield, and fairness impact, of the federal tax code. But they do not tell the whole story.

In particular, high-income taxpayers tend to generate most of their incomes from sources other than salaries and wages. For this group, the most important source of income tends to be their earnings on their investments, including both capital gains and dividends. These types of income are typically not subject to ordinary tax rates. Instead of paying rates up to 39.6 percent, high-income taxpayers who live off their investments face a top rate of just 23.8 percent. The special, lower tax rates applied to these types of income will remain unchanged regardless of whether House tax writers pursue a top ordinary tax rate of 35 percent, 39.6 percent, or any other level.

Another major category of income for high earners is profit from their businesses. These profits are commonly referred to as “pass-through” income because they are passed from the business entity to the individual owner’s tax return. While these profits are subject to the same tax rates as workers’ salaries and wages today, the House plan is likely to offer a special maximum tax rate of just 25 percent on this type of income. Again, the negotiations over a 35 percent versus 39.6 percent top rate are therefore irrelevant to this large chunk of wealthy Americans’ earnings, as the House seems intent on offering a rate significantly below either of those levels. 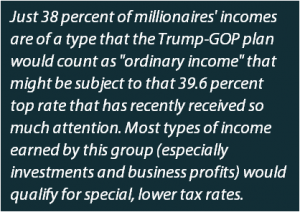 The nearby chart looks at the types of income earned by America’s millionaires in 2015, and sorts them according to the type of tax treatment they would receive under the Trump-GOP tax plan as currently articulated. In total, just 38 percent of millionaires’ incomes are of a type that the Trump-GOP plan would count as “ordinary income” that might be subject to that 39.6 percent top rate that has recently received so much attention. Most income (62 percent) earned by this group would qualify for special, lower tax rates—and this largely overlooked fact significantly reduces the fairness advantages of keeping a 39.6 percent tax rate in some form.

Of that 62 percent share of millionaires’ income types that would not be subject to ordinary rates, 37.5 percent comes from sources such as capital gains and dividends that already enjoy lower rates, and the other 24.6 percent comes from pass-through business income that will receive special, lower rates for the first time under the House plan.

The net result of granting pass-through income a special tax rate schedule will be to reduce dramatically, from 63 to 38 percent, the share of millionaires’ incomes that will be treated as “ordinary income” in the same manner as workers’ salaries and wages.

In part because millionaires would qualify for a special, low rate on most of their incomes, a recent ITEP analysis concluded that keeping the top tax rate at 39.6 percent for incomes over $1 million will not fundamentally improve the Trump-GOP tax plan’s lopsided impact. While millionaires could expect to receive 58.6 percent of the tax cuts under the original tax framework that was unveiled in September, their share of the tax cuts would fall less than 2 percentage points, to 56.8 percent, if the top rate is left at 39.6 percent for incomes over $1 million.