An updated version of this report has been published with data through July 1, 2017.

Many states’ transportation budgets are in disarray, in part because they are trying to cover the rising cost of asphalt, machinery, and other construction materials with a gasoline tax rate that is rarely increased. [1]  A growing number of states have recognized the problem with this approach and have switched to a “variable-rate” gas tax under which the tax rate tends to rise over time alongside either inflation or gas prices. A majority of Americans live in a state where the gas tax is automatically adjusted in this way. [2]

Despite the growing prevalence of variable-rate gas taxes, thirty-one states still rely on a “fixed-rate” gas tax structure and many of those states have gone years or even decades without a change in their gas tax rate.

The chart accompanying this report shows (as of July 1, 2016) the number of years that have elapsed since each state’s gas tax rate was last increased. [3]

Among the findings of this analysis:

• Twenty-one states have gone a decade or more without an increase in their gas tax rate.

• Sixteen states have gone two decades or more without a gas tax increase.

• Five states have not seen an increase in their gas tax rate since the 1980’s or earlier: Alaska, Oklahoma, Mississippi, South Carolina, and Tennessee.

• Among the thirty-one states levying a “fixed-rate” gas tax, the average length of time since the last gas tax increase is sixteen years.

• Most states levying a more sustainable “variable-rate” gas tax, by contrast, have seen their gas tax rate rise some time in the last two years.

If the gas tax is going to provide an adequate amount of revenue to fund transportation in the medium- and long-term, the tax rate needs to be periodically adjusted to at least keep pace with the rate of growth in the cost of infrastructure maintenance and construction. State gas tax rates that have gone ten to twenty years, or more, without an increase clearly do not live up to this bare minimum test of sustainability. 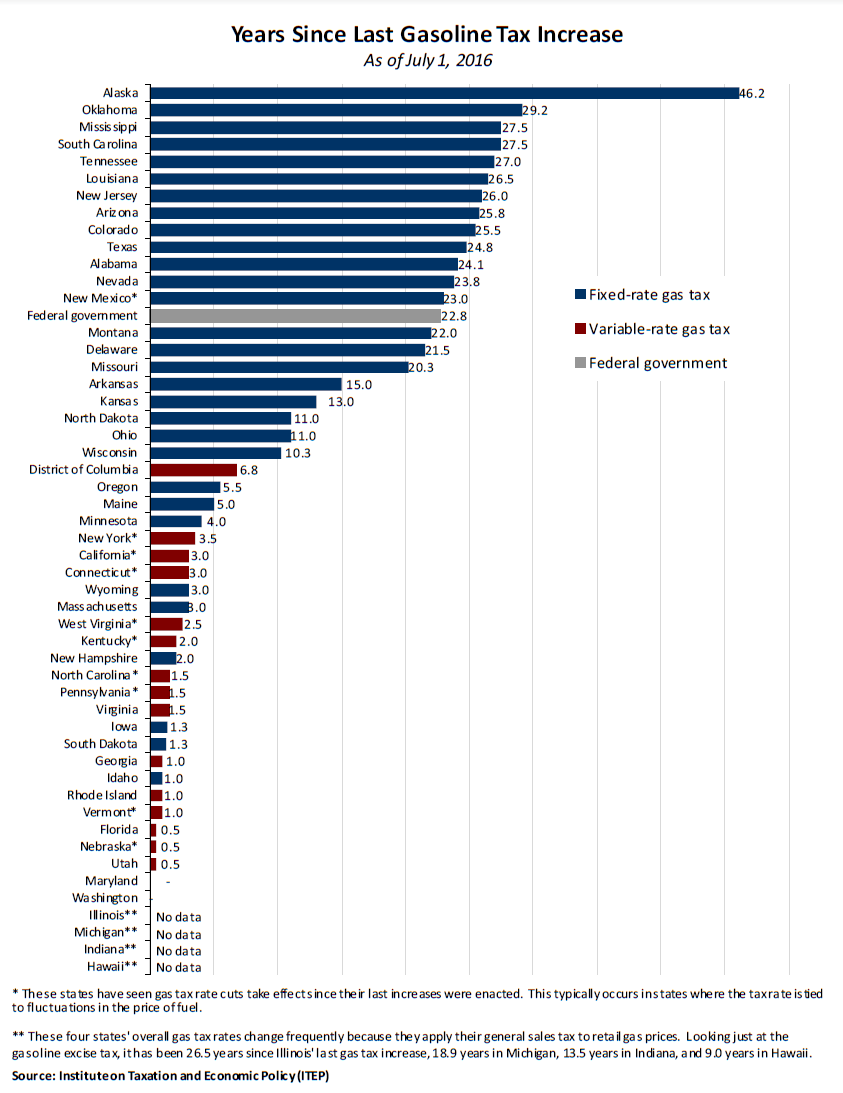 1) For a more in-depth discussion of this issue, see Institute on Taxation and Economic Policy, “Building a Better Gas Tax.” December 2011. Available at: https://itep.org/ bettergastax/.

2)  Institute on Taxation and Economic Policy. Most Americans Live in States with Variable-Rate Gas Taxes. February 2016. Available at: https://itep.sfo2.digitaloceanspaces.com/variablerategastax0216-1492632816.pdf .

3)  These figures rely on the date that each gasoline tax increase actually took effect, as opposed to the date on which it was signed into law. Furthermore, this analysis does not include the years elapsed since Hawaii, Illinois, Indiana, and Michigan last raised their gasoline excise taxes because each of these states applies its general sales tax to purchases of gasoline and therefore sees frequent changes in its overall tax rate on gasoline. If these states were included, Illinois would join the list of states having gone two decades or more (26.5 years) while Michigan (18.9 years) and Indiana (13.5 years) would join those states having gone one decade or more. Hawaii (9.0 years) is the state in this group to have most recently increased its gasoline excise tax.