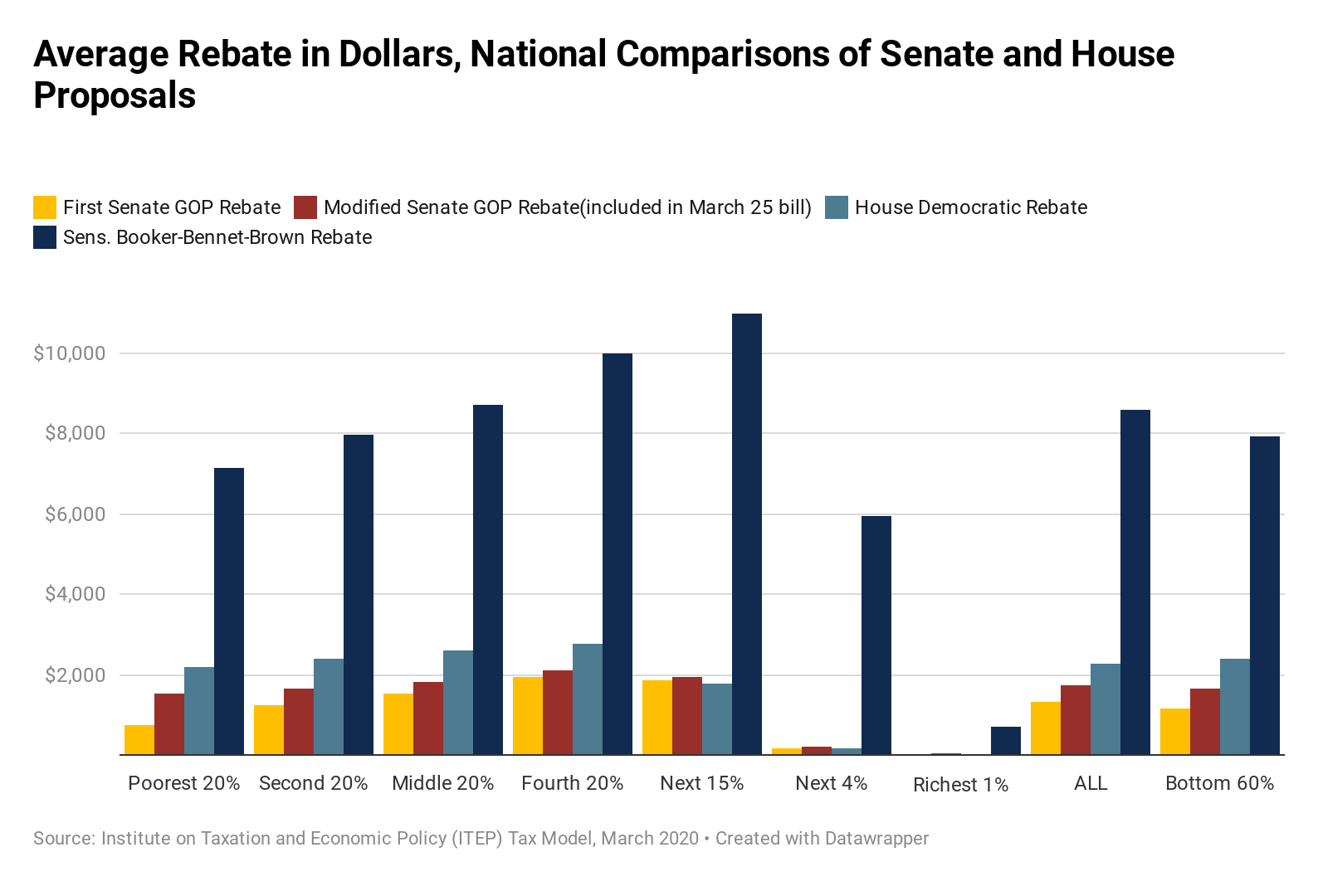 Update March 27, 2020: The House passed the Senate plan, and it will now go to the president, who is expected to sign it.

On March 25, the Senate passed a $2 trillion plan that includes $150 billion in fiscal aid to states, $150 billion in health care spending, large expansions of unemployment compensation and more. The House is likely to vote on the legislation soon. These measures are clearly needed as the economy teeters on the brink. One provision that ITEP has insights on is the payments to households in the form of tax rebates. ITEP has provided several analyses over the past few days showing that the rebate in the current bill is an improvement over a previous GOP proposal but still falls short of the benefits offered under Democratic proposals.

The bill passed by the Senate is an improvement over the previous GOP Senate proposal, which offered the same tax rebate but included additional restrictions that would prevent many low-income workers and families from fully benefitting. Under that bill, the basic tax rebate would be limited to one’s tax liability before taking refundable credits into account, leaving out people with very low incomes who do not owe personal income tax (including many seniors, because most Social Security benefits are not included in taxable income). The bill provided these individuals with a smaller credit that also came with a complicated set of rules restricting it for many low-income people. And, people with incomes under $2,500 were excluded altogether.

The modified Senate GOP rebate proposal (which is included in the bill passed by the Senate) does not include those restrictions for low- and moderate-income people and families.

The graphs below illustrate the benefits of these proposals assuming that everyone who is eligible for tax rebates eventually receives them. But the Senate bill limited immediate payments to those who have filed tax returns for 2019 or 2018 and those who have received Social Security benefits. This means benefits would be delayed for millions of individuals and families, including seniors and people with disabilities receiving SSI and others whose income is so low that they are not required to file a tax return.

The payments are unavailable to immigrants working in the United States who file taxes using an Individual Taxpayer Identification Number (ITIN), excluding an additional estimated 4.3 million adults and 3.5 million children from the benefit.

Both GOP Proposals Are Less Generous Than House Democrats’ Bill

The House Democratic bill would have offered $1,500 to unmarried taxpayers and $3,000 to married taxpayers, plus $1,500 for each child under age 17. As illustrated in the graphs below, this would have resulted in more generous payments for working people and families.

The House bill would have been implemented more easily because it would send checks to everyone immediately. Those who exceed the income limits would pay back all or part of the rebate they received in their tax returns over the next three years. (For well-off people, the rebate would basically be an interest-free loan.)

The House bill would send the immediate payments to a larger population, including recipients of SSI and other benefits and would include ITIN filers.

A fourth plan for payments to households was assembled by Sens. Corey Booker, Michael Bennet, and Sherrod Brown but was never drafted as legislation and not considered during the Senate debate. But it nonetheless illustrates how much more Congress could do to help people in very uncertain times.

Taxpayers would receive a flat payment of up to $4,500 in 2020 for each member of their household. The $4,500 includes an initial payment of $2,000 per person, followed by additional payments if economic conditions continue to deteriorate. (ITEP’s analysis assumes that the full payments of $4,500 are made in 2020.)

As illustrated in the graphs below, this would provide far more generous payments to families who could use help right now.

Benefits under the Democratic plan would be phased out above a certain income level. While the sponsors never announced what the income limit would be, reports state that the income phaseouts would begin at $180,000 for married couples and $90,000 for other taxpayers.