The Indiana Senate Appropriations Committee recently approved a budget cutting the state’s personal income tax rate from 3.4 percent to 3.3 percent beginning in 2015. Although this proposal costs less than one-third the amount of Governor Pence’s preferred cut (which would take the rate down to 3.06 percent), it would still reduce state revenues by roughly $150 million each year. Concerns over the plans’ price tags aside, both plans would exacerbate the unfairness of Indiana’s tax system—ranked as the ninth most regressive in the entire country by the Institute on Taxation and Economic Policy (ITEP). 1

In this brief, ITEP uses its Microsimulation Tax Model to analyze the new Senate plan and to update its August 2012 analysis of Governor Pence’s plan in light of new economic data. These analyses show that while the tax cuts offered under the Senate plan are significantly smaller than those proposed by the Governor, the two plans are identical in terms of how they distribute their tax cuts among Indiana residents at different income levels:

• The bottom 60 percent of households, by contrast, would receive less than a quarter (23 percent) of the tax cuts distributed under either plan.

• The Senate plan pares back all of these amounts, but continues to provide the largest breaks to the most affluent taxpayers. Middleincome taxpayers would see their break sliced to just $33 per year—less than $3 per month. At the same time, the top 1 percent of taxpayers would receive a much more sizeable cut of $694 per year. The bottom 20 percent of earners would see their tax break reduced to a negligible level—just $6 per year.

In explaining why the Indiana House budget did not include an income tax cut, House Speaker Brian Bosma reminded lawmakers of the role that tax cuts played in bringing the state from surplus to deficit during similarly turbulent economic times roughly one decade ago.2 If lawmakers decide to ignore this cautionary tale and charge ahead with a tax cut, they should at least debate a cut designed to lessen, not increase, the regressivity of Indiana’s tax system. 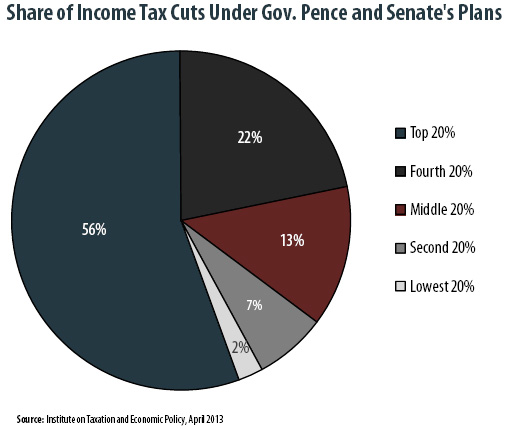