It’s Been 10,000 Days Since the Federal Government Raised the Gas Tax 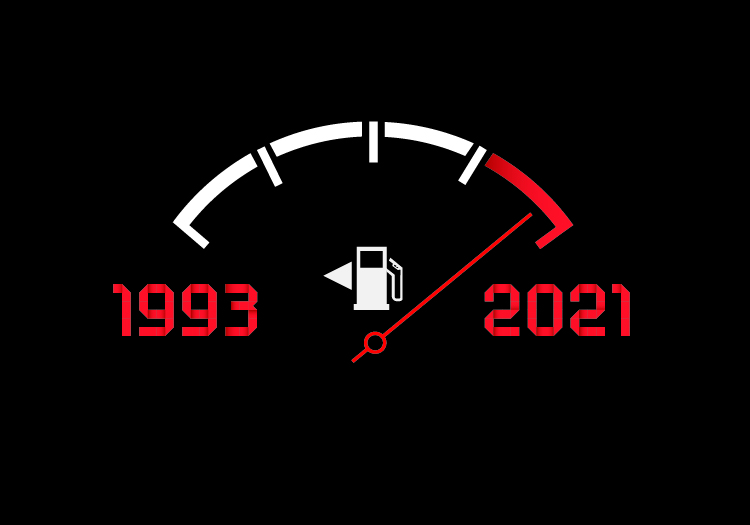 10,000 days. More than 27 years. By next Tuesday that’s how long it will have been since the federal government last raised the gas tax. Over that time, vehicle fuel efficiency has improved by 25 percent and construction costs have grown 185 percent. And yet the federal gas tax has remained frozen at 18.3 cents per gallon, with its purchasing power shrinking by the day. The federal government has never gone this long without updating the nation’s gas tax rate.

The core problem confronting the gas tax is a failure to plan. In the income tax code, fixed dollar amounts are usually linked to a measure of inflation so that tax brackets, deductions, and credits can keep pace with current economic realities. This is a simple, sensible, and generally uncontroversial feature of the income tax. But it’s missing from federal gas tax law.

On top of that, the average fuel economy of the nation’s vehicles has been gradually inching upward, allowing drivers to travel further than before on fewer tanks of gas. This is a welcome advancement with major environmental benefits, but it also puts downward pressure on gas tax revenues that lawmakers should not ignore when crafting transportation tax and budget policy.

Combined, these two developments have reduced the purchasing power of the federal gas tax by 72 percent since Congress last raised the tax in the early days of the Clinton Administration. To make up lost ground, lawmakers would need to increase the rate by more than 46 cents, to 65 cents per gallon.

Unfortunately, Transportation Secretary Pete Buttigieg has already taken a gas tax increase off the table for the foreseeable future, instead preferring to look ahead to a vehicle miles traveled (VMT) tax as the likely future of transportation funding. Over the long-run, VMT taxes have a lot of appeal as a way of requiring people who drive the most to continue chipping in a bit more for the roads, bridges, and other infrastructure they use every day. An Oregon pilot project has already shown that VMT taxes can work, albeit at a somewhat higher administrative cost than the gas tax.

But it’s hard to imagine widespread public acceptance of a VMT tax, and regular reporting of vehicle mileage to the government during these incredibly divisive and deeply paranoid times. Moreover, the need for a VMT tax is less pressing than it might seem given that a vanishingly small share of vehicles on the road today are fully electric.

So, what does the future of transportation funding hold? Ongoing discussion of VMT taxes is a good place to start. Eventually, a large share of vehicles will run on something other than gasoline and this type of tax will be necessary. It would be best to give the idea a full public airing before that moment arrives, rather than springing it on an unsuspecting public.

But the nation also has infrastructure needs that must be met today. Getting those projects funded will likely require a mix of debt and higher taxes on rich families who are faring extraordinarily well during these tumultuous times.

As far as the gas tax goes, even without an outright tax increase, there is still good reason for the Biden Administration to consider an inflation indexing reform. If we don’t think of yearly, inflation-driven updates in the nation’s income tax brackets as tax cuts, then we shouldn’t consider yearly updates to the gas tax to be tax “increases.” A growing number of states have indexed their gas taxes to inflation in recent years, and Georgia has implemented an innovative reform indexing its gas tax to average vehicle fuel economy. Indexing alone won’t be enough to end our infrastructure funding woes, but it could at least slow the bleeding.