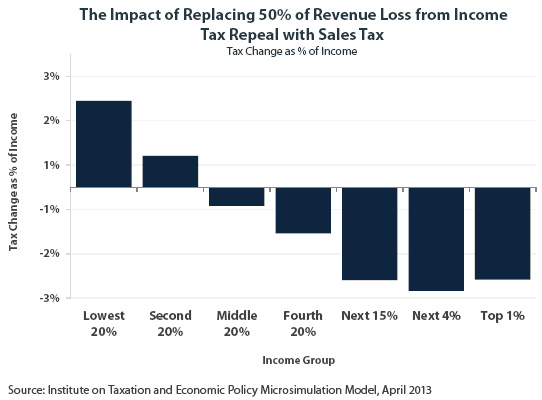 Earlier this year, Kansas Governor Sam Brownback proposed another round of personal income tax cuts (on top of those he signed into law last year).1 The House and Senate each responded with their own tax cut plans and are expected to reconcile their differences this week. To date, much attention has been given to the major difference between the House and Senate plans — the Senate bill includes permanently preserving a sales tax rate hike that was set to expire this summer while the House plan would allow the rate hike to expire. However, the long term impact of either plan should be of paramount concern to all Kansans because both plans eventually lead to the elimination of the state’s personal income tax.

Policymakers have not proposed a way to pay for this $2.2 billion tax cut, instead they are making an explicit assumption that income tax repeal will at least partially pay for itself. Kansas’ balanced-budget requirement means that the state will, in any given year, be forced to off set at least some portion of the revenue loss from income tax repeal—and further increases in the state sales tax will be the primary remaining revenue-raising option for lawmakers after income tax repeal.

• If 25% of the revenue loss from income tax repeal was made up through a sales tax rate increase, the poorest 20 percent of Kansans would see a net tax hike from this change, and the state sales tax rate would have to be increased by 1.41 percent, from the current 6.3 to 7.71. (This would mean that the statewide average combined state and local sales tax would go up from 8.05 to 9.46 percent.)

• If 50% of the revenue losses were made up with sales tax hikes, the poorest 40 percent of Kansans would see a net tax hike from this change, the state sales tax rate would have to be increased by 2.81 percent, from 6.3 to 9.11, pushing the statewide average state/local rate up to 10.86 percent.

• If every dime of the income tax cut were ultimately paid for by increases in state sales taxes, the poorest 80 percent of Kansans would, as a group, see a tax hike overall. Th is “revenue-neutral” approach to income tax repeal would require a statewide average sales tax rate of 13.68 percent.

Eliminating the income tax jeopardizes the ability of Kansas to adequately pay for roads, bridges, education, health care or anything else funded by the state. Wealthy Kansans would benefit the most from this tax change and poor families would likely see their taxes increased. Lawmakers and the public should be aware of the devastating impact either the House or the Senate bill would have, regardless of the compromise reached about the current sales tax rate, on the state’s ability to balance its budget and on tax fairness.

1 Last year’s tax changes resulted in a dramatic reduction in tax revenues, large tax cuts for the state’s most affluent residents, and tax increases on many of the state’s working poor. ITEP’s analysis of 2012 plan is here: https://itep.org/tax-bill-signed-by-governor-brownback-makes-kansas-an-outlier/. Components of the Governor’s 2013 tax proposal include lowering the tax rates to 1.9 and 3.5 percent, eliminating itemized deductions for mortgage interest and property taxes paid, and raising the sales tax. An ITEP analysis of the Governor’s 2013 proposal is here: https://itep.org/kansas-governors-new-plan-increases-taxes-on-poor-yet-slashes-revenue-by-340-million/.