A new talking point printed on the opinion page of The Wall Street Journal is proving irresistible to state lawmakers looking for an excuse to reduce or eliminate their states’ income taxes:

A new analysis by economist Art Laffer for the American Legislative Exchange Council finds that, from 2002 to 2012, 62% of the three million net new jobs in America were created in the nine states without an income tax, though these states account for only about 20% of the national population.1

In addition to being repeated by a number of conservative organizations and pundits, this new factoid has found its way into the hands of Indiana Governor Mike Pence, Iowa House Majority Whip Chris Hagenow, and the Louisiana Department of Revenue official who has been described as the “point man for [Governor] Jindal’s push to eliminate income taxes.”2

In reality, however, this talking point adds nothing of substance to the debate over how state income taxes affect economic growth. As this report shows:

• Texas alone is responsible for the vast majority of job growth being misleadingly attributed to all nine states without broad-based personal income taxes.3

• Texas’ economy differs from that of other states in many significant ways. Simply comparing its job growth to the rest of the country provides no insight into the effect that Texas’ tax policies in particular may or may not have on its economy.

• Job growth over the 2002-2012 period was heavily influenced by the Great Recession, and thus the “62 percent” statistic is rooted not in Texas’ long-term growth rate, but in the state having been largely spared from the housing crisis.

• Comparing Texas’ growth rate to the rest of the country over either a longer or shorter period of time shows that the state’s job growth has been generally in line with its rate of population growth. 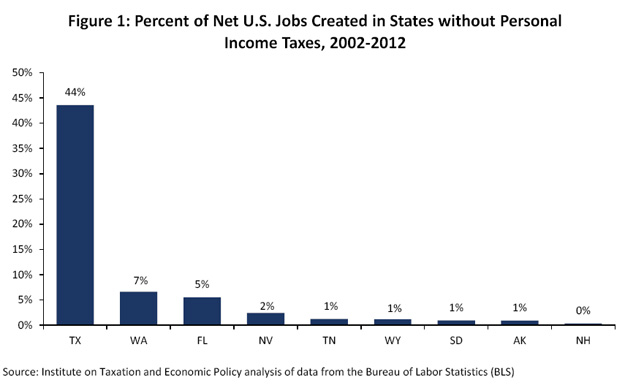 Not Actually About “Nine States”

While the “62 percent” figure is carefully crafted to suggest that states without income taxes are universally succeeding, this number actually has very little to do with the “nine states without an income tax,” and everything to do with one state: Texas.

Over the 10 year period that Arthur Laffer examines, Texas alone accounted for 44 percent of all net U.S. job growth—or 70 percent of the job growth among the nine states without income taxes that Laffer spotlights.4 As Figure 1 shows, none of the other eight states came close to matching Texas’ contribution to national job growth, and five of the nine states without income taxes contributed 1 percent or less to the nation’s net job growth. Hidden in Laffer’s new statistic is the fact that the other eight states are simply riding Texas’ coattails.

Putting Texas aside, the other states without income taxes are responsible for 18.9 percent of net nationwide job growth over the last 10 years. This is entirely unsurprising given that these states, led by sunny Florida and overwhelmingly located in the fast-growing south and western regions of the country, saw 19.2 percent of all U.S. population growth over that same period.5 In fact, with job growth slightly trailing population growth in these eight states, their average unemployment rate increased by 1.8 percentage points over the period Laffer examined, while the unemployment rate in states that levy personal income taxes increased just 1.6 percentage points.

In this light, Laffer’s new statistic is simply a repackaging of the “Texas Economic Miracle” argument that Texas Governor Rick Perry and others have sought to advance in recent years. But Texas’ employment growth between 2002 and 2012 tells us nothing about the economic impact of not levying a personal income tax.

States without income taxes often choose not to levy such a tax because they possess unusual economic advantages that allow them to generate tax revenue (and grow their economies) in ways that most states cannot easily replicate. Texas is no exception to this trend, as the Center on Budget and Policy Priorities (CBPP) detailed in a report titled “The Texas Economic Model: Hard for Other States to Follow and Not All It Seems.”6 Among the factors buoying Texas’ job growth are: an oil and gas extraction sector benefiting from high gas prices; increased U.S. trade with Mexico; low housing prices; and a high birth rate and influx of immigrants that have grown the state’s population and increased the demand for goods and services within its borders.

Given all of these factors, it is unsurprising that Texas’ job growth has been more rapid than the national average—indeed, it would be shocking if this were not the case. Laffer’s analysis hinges on concealing the influence of these factors behind rhetoric about the importance of low tax rates to state economies. But Laffer has made no attempt to show that Texas’ tax policy decisions have affected its job growth, despite the fact that more careful academic studies that control for non-tax factors have frequently found little if any benefit from shunning the personal income tax. 7

Furthermore, there are serious problems with using population growth and net total job growth as the exclusive measures of a state’s economic success.8 Adding to ITEP’s previous work, the CBPP report points out that “all is not rosy” in Texas, and that Texans are significantly more likely than the average American to be in poverty, earn the minimum wage, and have no health insurance. For those struggling families, it is cold comfort that there are more employed people living inside Texas’ borders than in years past.

Time Period Chosen by Laffer is Distorted by the Great Recession

The ten year period examined by Laffer (2002-2012) is far from typical because it includes the worst economic downturn since the Great Depression. As a result, the story it tells is rooted not in Texas’ long-term growth rate, but in the state having been largely spared from the housing crisis, and able to better weather the recession than most states as a result. 9

Over the first five years (2002-2007) of the decade Laffer examined, Texas created 14.7 percent of all net U.S. jobs (a figure closely in line with the state’s 15.4 percent share of all U.S. population growth). In 2008, when most states began to shed jobs more quickly than Texas, the state’s jobs situation began to look even better in contrast to the rest of the country and its share of all net new job creation since 2002 rose to 23.6 percent. That share grew even larger by the time the recession had taken its full toll, and eventually reached 44 percent for the entire 2002-2012 period.

In order to provide a longer-term perspective that is not so heavily influenced by the recent, almost unprecedented economic downturn, Figure 2 shows what Laffer would have concluded had he examined Texas’ share of all U.S. net job growth over the last 20, 30, 40, or 50 years. In each case, Texas’ share was between 11 and 15 percent—far less than the anomalous 44 percent figure from the last 10 years, and closely in line with the 12 to 14 percent share of population growth that Texas saw over each of these periods. 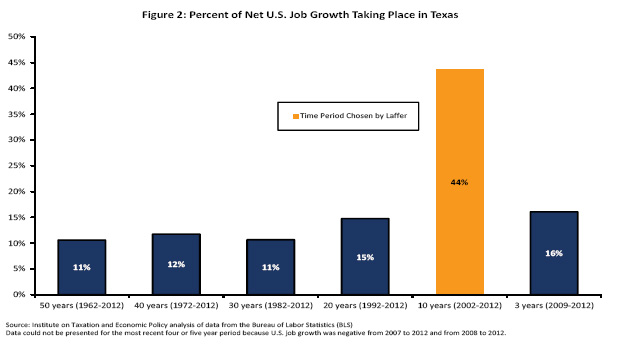 Moreover, Texas’ share of all U.S. job growth since the end of the Great Recession (2009-2012) was a similarly more modest 16 percent.

Given that Texas has been among a minority of states not levying an income tax for this entire 50 year period, there is no reason to think that differences in tax policy between states are what led to the enormous jump in Texas’ share of net employment growth over the unusual 2002-2012 period.

The claim that 62 percent of net new jobs have been created in states without income taxes has been used by lawmakers and advocates as evidence that cutting or repealing state income taxes is a surefire path to economic success. But a closer look reveals that this statistic is driven by the fact that one state without an income tax—Texas—weathered the recent recession in better condition than most states, and did so for reasons unrelated to tax policy. In fact, most of the states without personal income taxes contributed just one percentage point or less to the nation’s net new job growth over the last ten years.

4 The Wall Street Journal does not explain Laffer’s methodology, but he appears to have compared total nonfarm employment by state for November 2002 versus November 2012. For consistency, we use November employment and unemployment rate data throughout this report. Population data are annual figures from the U.S. Census Bureau.

5 According to data from the U.S. Census Bureau, eighteen of the top twenty states in terms of population growth over the last 10 years are located in the West or South (with Alaska and Hawaii in the “Pacific” region being the exceptions). ITEP has written about population growth trends in the states in: “’High Rate’Income Tax States Are Outperforming No-Tax States.” Institute on Taxation and Economic Policy. February 2012. Available at: https://itep.sfo2.digitaloceanspaces.com/junkeconomics.pdf.

6 McNichol, Elizabeth and Nicholas Johnson. “The Texas Economic Model: Hard for Other States to Follow and Not All It Seems.” Center on Budget and Policy Priorities. April 3, 2012. Available at: http://www.cbpp.org/cms/index.cfm?fa=view&id=3739.