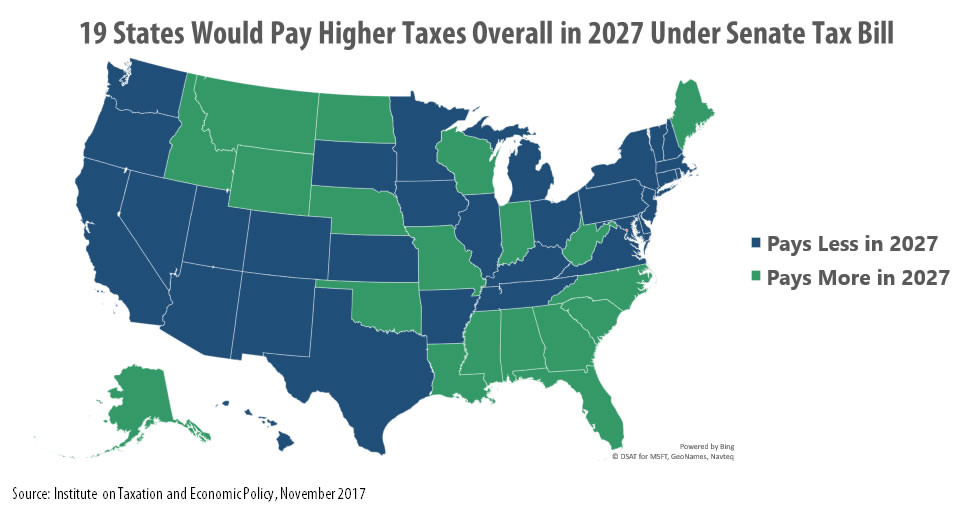 One of the more surprising findings of ITEP’s recent estimates on the Senate tax bill is that 19 states would pay more overall in federal taxes if the bill becomes law. This is not just an increase in the personal income taxes paid (which would happen in some states under the House bill). This is an increase in their net federal taxes overall, even including the assumed benefits of corporate tax cuts and estate tax cuts.

Anyone who has been following the tax debate already knows that the House bill would disadvantage some states with higher state-level income taxes (which would no longer be deductible on federal tax returns).

Our report examined what happens under the Senate bill in 2019 (the first year all the major provisions would be in effect) and in 2027. We found that the populations of 19 states would pay more in federal taxes overall in 2027 than they would under current law.

The results of the 2027 analysis are largely driven by three major aspects of the Senate tax bill for individuals. First, the tax cuts for individuals would expire in 2025 under the bill. Second, the Senate bill’s use of a different inflation adjustment (called “chained CPI”) would remain in effect. This would gradually push people into higher income tax brackets, while at the same time several deductions, exemptions, and credits would become less generous. Third, the bill’s provision to repeal the individual health insurance mandate would result in fewer people receiving tax credits under the Affordable Care Act to pay their insurance premiums.

Tax cuts for corporations, as well as some more modest changes for pass-through businesses, would still be in effect. ITEP follows the approach of JCT (the Joint Committee on Taxation) by assuming that a quarter of the benefits of a corporate tax cut go to workers by the tenth year after enactment. The rest of the benefits go to the owners of corporate stocks, and a small proportion of that stock is owned by middle-income people (although far more is owned by the rich). For some (mostly wealthy) people, the benefits of these corporate tax cuts would exceed the tax increase that results from chained CPI and, in some cases, the repeal of the health insurance mandate.

But for these 19 states, the net effect of these changes across the whole population would be a tax increase.

Office of Management and Budget Director Mick Mulvaney said on Meet the Press on last weekend that none of this matters. He claimed that no tax cuts would really expire because Congress would simply extend them without concern about the hundreds of billions of dollars that this would add to the deficit each year. The expiration of these tax cuts was simply a way to “game” the rules surrounding the reconciliation process, which in this particular case will not allow the bill to increase the deficit by more than $1.5 trillion.

“In order to do that, certain proposals can only have certain economic impact,” Mulvaney said.

In other words, the Trump administration will use the reconciliation process, which was designed to get the budget under control and limit deficits, to enact tax cuts that increase the deficit, which is exactly what the Bush administration did. “A lot of this is a gimmick,” Mulvaney admitted.

So, even though Mulvaney’s home state of South Carolina is among the 19 that would pay higher taxes overall in the future under the Senate bill as written, he is saying his old constituents should just trust the promises of Republican leaders that all this will be sorted out in the future.

At the same time, Republican leaders claim they need to make the corporate tax cuts permanent because corporations need certainty to plan their investment decisions. This is a curious argument, because it rests on the idea that Republicans’ promise to extend tax cuts should be trusted by middle-class families, but would never be trusted by savvy corporate CEOs. And if that’s the case, the CEOs are on to something. Congress is so dysfunctional and unpredictable that no one should bet on any future legislation related to anything.

Of course, the Senate tax bill is enormously harmful even before any of its provisions expire. In 2019, the first year when all of the provisions are in effect, about a quarter of the tax cuts would go to the richest one percent of taxpayers and half would go to the richest 5 percent of taxpayers. One in ten households would face a tax hike and yet the bill would still increase the deficit. Foreign investors would benefit from the corporate tax cuts more than middle-income Americans.

Senate Republicans could have chosen any number of paths. They could have included no corporate tax cuts or made the corporate tax cuts temporary. In the end, they are making a choice about who will definitely get tax cuts in the short term and long term, and they are choosing big corporations. Uncertainty – that’s for the little people apparently.