Read this report in PDF (includes appendix with state-by-state data).

Download Spreadsheet of the National and State-by State Data.

(The version of this report reflecting the Senate bill before it was amended can be found here.)

The tax bill reported out of the Senate Finance Committee on Nov. 16 would raise taxes on at least 29 percent of Americans and cause the populations of 19 states to pay more in federal taxes in 2027 than they do today. The lowest-earning three-fifths of Americans would pay more on average in federal taxes, while the top 40 percent on average would receive a tax cut. The bill would increase the deficit because of the substantial tax breaks it would provide to the wealthy and to foreign investors who own stocks in American corporations and who would therefore benefit from the bill’s corporate tax cuts.

The legislation is described as tax reform but would cut hundreds of billions of dollars in health care spending. The provision recently added to the legislation to repeal the Affordable Care Act’s individual mandate would result in 13 million fewer people obtaining health insurance and a 10 percent increase in premiums for people in the non-group health insurance market, according to the Congressional Budget Office (CBO).[1]

The reconciliation rules allow this bill to increase the deficit by $1.5 trillion over a decade, as set out in a budget resolution already approved by Congress, but this is not sufficient to allow all the tax cuts in the bill. So the Finance Committee senators made some tax cuts temporary and added a provision to cut the federal government’s spending on health care by repealing the health insurance mandate.

Under the bill as written, the provisions affecting corporations would remain in effect in years after 2025, but of the provisions affecting individuals, the only two remaining in effect would be revenue-raisers. One would raise taxes by using an inflation measure that would more quickly shift middle-class income into higher tax brackets and gradually make provisions like the Earned Income Tax Credit less generous. (This measure is often called the chained consumer price index or chained CPI).

The other revenue-raiser is the provision repealing the mandate to obtain health insurance. This would result in a small revenue loss because no one would pay the penalty that is in effect today for some individuals who go without health insurance. But it would also result in a much larger revenue gain because some who would no longer be covered are those who receive tax credits to pay insurance premiums under the Affordable Care Act. Fewer premium tax credits would be paid out, resulting in a revenue gain.[2]

Under the Senate bill, at least 29 percent of households would pay higher taxes in 2027 than they would under current law. Among the bottom three-fifths of income-earners, 33 percent would pay higher taxes in 2027. While most of the figures in this analysis include the tax impacts of the health insurance mandate repeal as well as other provisions in the bill, the estimated share of taxpayers with a tax increase does not include the effects of the mandate repeal. (While the impact of the mandate on each income group can be determined, it is more difficult to identify the precise number of taxpayers affected in each income group.) This means that the share of taxpayers with a tax hike is likely to be greater than what is estimated here.

The figures in the graphs and tables in this report do not account for other effects from the repeal of the health insurance mandate, including a reduction in Medicaid spending and the increase in health insurance premiums. In other words, many lower- and middle-income people will be worse off than these figures demonstrate.

As explained in the methodology section, this analysis follows the approach of Congress’s official revenue estimator in assuming that by 2027, one-fourth of the benefits from the bill’s corporate tax cuts would go to workers, meaning these benefits are assumed to be distributed as salaries, wages, and other forms of earned income are distributed across the population. This analysis takes this approach because many economists claim that lower corporate taxes lead companies in the United States to invest more in ways that will increase hiring and raise wages in the long run. But it is very unclear when or if this would ever happen. The benefits might instead remain entirely concentrated on those who own corporate stocks, which are mostly held by high-income households. In other words, the figures shown here are probably a best-case scenario for low- and middle-income people.

Even in 2019, the plan is not designed to benefit the American middle class. The benefits going to foreign investors would amount to $31 billion in 2019. The net tax cuts going to the middle fifth of income earners in 2019, the literal middle-class, would be only $22 billion. The lowest-income 40 percent would receive benefits smaller than that.

There would be some taxpayers in every state paying more under the Senate bill, but in 2027 19 states would even pay more overall, meaning the populations of these states as a whole would pay more in federal taxes than they would if current law were left unchanged.

The reason some states are more affected than others in 2027 has to do partly with the fact that the tax credits that help people pay health insurance premiums under the Affordable Care Act are more significant in some states than others, and some of these credits would no longer be paid out because of the repeal of the health insurance mandate under the bill. Based on the most recent IRS data, 16 of the 18 states with the most significant total premium tax credits received in 2015 (measured as a share of the total income of people in the state) are among the states that would have overall tax increases in 2027. (The two exceptions are Vermont, which would have a net impact of about zero dollars in 2027, and the other is California.) The three other states receiving an overall net tax increase in 2027 would be North Dakota, Oklahoma and West Virginia.

The proposed changes to the international corporate tax rules, including adoption of a “territorial” tax system and other changes, are included in their entirety because of the many ways in which these proposals interact with each other.

The one exception to this approach is that this analysis does not incorporate the provision to impose a one-time tax, at reduced rates, on the profits that American corporations are officially holding offshore. This proposal, which is sometimes called a “deemed repatriation,” raises revenue during the official 10-year budget window and is technically a tax increase. But this provision is a significant break to many, if not most, American multinational corporations and the revenue raised would be temporary. As another ITEP report explains, this provision would, in the long-run, provide a break of $562 billion to American multinational corporations.[4]

In total, this analysis includes the revenue-losing provisions that account for 98 percent of the bill’s gross revenue costs according to JCT. This analysis includes the revenue-raising provisions that account for 93 percent of the gross revenue raised (or 89 percent if the deemed repatriation provision is considered a revenue increase). This analysis is confined to tax revenue and therefore also excludes the effects of repealing the health insurance mandate on direct spending (such as the reduction in Medicaid spending that would result). 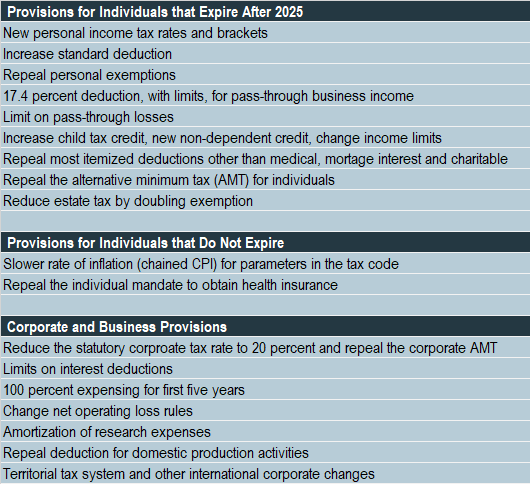 Proposed changes affecting individuals are modeled using ITEP’s microsimulation model, which generates tax estimates for a sample of representative taxpayer records from each state.[5] When estimating the impact of corporate tax changes, ITEP uses JCT’s revenue estimates for guidance on a provision’s overall impact and then calculates the distribution of benefits or costs among taxpayers.[6] ITEP follows JCT’s approach in assuming that in the short run, a corporate tax cut will benefit the owners of corporate stocks alone, but in the long run (usually assumed to be ten years after enactment) a quarter of the benefits will flow to workers.[7]

ITEP differs from JCT in that we have updated our approach to account for new research that finds 35 percent of American corporate stocks are owned by foreign investors, a larger fraction than we previously assumed. [8]  This means that whatever portion of benefits flows to owners of corporate stocks (100 percent in the short-run, three-fourths in the long-run), one can assume that 35 percent of that amount flows to foreign investors.

To estimate the effects of repealing the ACA’s individual mandate to obtain health insurance, we begin with CBO’s estimates of the change in tax revenue that would result from this provision. For example, CBO has estimated that by 2027 repealing the mandate would result in $6 billion less collected from the penalty for not obtaining health insurance (because the penalty would be eliminated) and $28 billion in savings from what CBO calls “changes in subsidies for coverage through marketplace and related spending and revenues.”[9] In another document, CBO breaks down baseline revenue and spending impacts under current law of what it calls “Nongroup Coverage and the Basic Health Program,” which appears to be the same thing and shows that premium tax credits make up 79 percent of that category.[10] This analysis therefore assumes that of the $28 billion in savings that CBO projects for 2027 from changes in subsidies for coverage that would result from repealing the mandate, 79 percent of that amount, or about $22 billion, is a reduction in premium credits paid out that year.  To estimate the distribution of these amounts across income groups in each state, this analysis begins with the distribution of penalty payments paid and premium tax credits received in each state in 2015 according to the most recent IRS data.[11] The distribution of the reduction in these amounts under this bill is assumed to be similar, with adjustments for the shift to later years.

Click to see the distribution for taxes in your state:

[3] Joint Committee on Taxation, “Estimated Revenue Effects of the Chairman’s Modification to the Chairman’s Mark of the “Tax Cuts and Jobs Act,” Scheduled for Markup by the Committee on Finance on November 15, 2017,” JCX-57-17. https://www.jct.gov/publications.html?func=startdown&id=5038