New Jersey Leads by Example with Its New Cannabis Tax

One in three Americans lives in a state with legal sales of recreational cannabis. All of these states tax cannabis sales, but some of those tax structures are more thoughtfully designed than others. Last month, New Jersey lawmakers passed an innovative tax design that other states debating cannabis legalization should look to for inspiration.

The state officially legalized cannabis in November when voters overwhelmingly approved a constitutional amendment by a margin of 67 to 33 percent. The amendment applied the state’s general sales tax to cannabis and allowed local governments to create their own taxes on the industry. The legislature added the most notable part of the tax structure last month with a Social Equity Excise Fee.

By creating this fee, New Jersey will join Alaska, California, and Maine in setting up systems that tax cannabis based partly on the weight of the product. The 11 other states with legal sales have built their tax regimes exclusively around price, which will eventually spell trouble when cannabis prices collapse, and the revenue potential and deterrent effect of these taxes collapse right along with them. Frankly, there’s not much sense in building an entire cannabis tax system around prices when we know those prices are going to fall, and eventually fall by a lot. 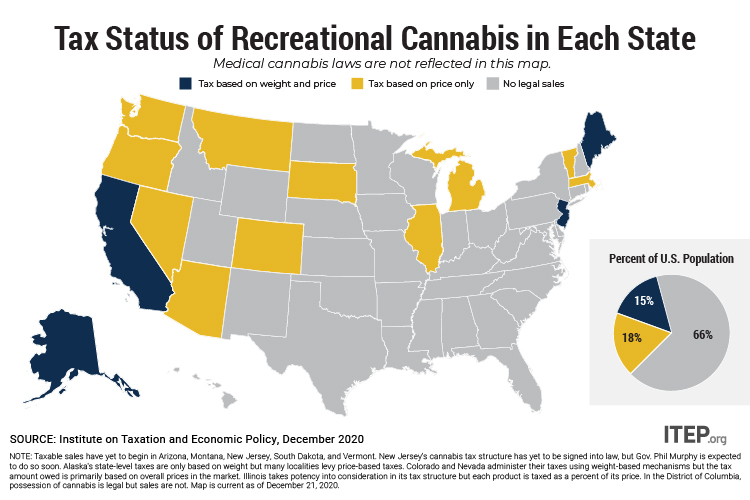 New Jersey’s chief innovation is in ramping up its weight-based tax over time, a simple enough reform that brings with it several significant benefits. New Jersey’s phase-in schedule is:

Other states have shied away from levying robust taxes on cannabis partly out of fear that it would make legal businesses uncompetitive with a thriving illicit market. But this is largely a short-run problem. Prices in the legal market tend to be highest in the early days of legalization as new businesses find their footing but, with time, those prices come down to levels that are more competitive with the illicit market. By phasing in the tax so that higher rates only kick in once pre-tax prices have dropped to more competitive levels, New Jersey lawmakers have given their legal businesses a leg up in the important, early days of their growth without having to lock in permanently low tax rates.

This is important both in shoring up revenue collections over time and in helping to preserve the tax as a deterrent to overconsumption and youth consumption as cannabis becomes cheaper to buy. In contrast to this system, a price-based tax exacerbates any price cut, requiring the highest tax payments when legal prices are highest and least competitive, and oddly cutting taxes at precisely the moment that prices are already on their way down.

The most notable drawback of a New Jersey style phase-in is that it reduces revenue collections in the early years relative to what could have been raised if the state implemented a $40 or $60 per ounce tax effective on the first day of legal sales. For states confronting significant revenue shortfalls in this very difficult moment, delaying tax collections in the way that New Jersey has done is a difficult choice to make. The sacrifice may be less serious than it seems, though, as revenue collections in the first year or two of legalization are often low anyway because it takes time for a critical mass of legal sellers to open their doors.

Over the long haul, New Jersey will be able to count on a meaningful revenue stream to make important investments in its people and communities. Other states with legal cannabis, and those on the verge of legalization, should take notice of how New Jersey has chosen to set up its new tax structure on recreational cannabis.