Lawmakers determined to eliminate the cap on federal income tax deductions for state and local taxes (SALT) have several options to reduce its reach that would cost much less than repealing it.

The Institute on Taxation and Economic Policy (ITEP) released a report earlier this year suggesting a better approach that would replace the cap on SALT deductions with a more effective limit on tax breaks for the rich that raises revenue without targeting high-tax, “blue” states.[1]

If lawmakers are unwilling to replace the SALT cap with a new limit on tax breaks that raises revenue, then any modification they make to the cap in the current environment will lose revenue and make the federal tax code less progressive. Given this, lawmakers should choose a policy option that loses as little revenue as possible and that does the smallest amount of damage possible to the progressivity of the federal tax code. This report examines four options, including repealing the SALT cap and three other options that each cost less than a third as much.

The stated objectives of lawmakers concerned about the SALT cap are contradictory and cannot be achieved easily by any option. At times, lawmakers say they want to protect middle-income households from the SALT cap even though it has a minimal effect on these households. At other times, lawmakers say they are concerned that the SALT cap will drive high-income households out of states with steeper taxes, even though there is no evidence that tax policy is causing anyone to move from one state to another. Is the goal, then, to help the middle-class or to help the rich? The answer to that question could determine which policy option lawmakers will favor. But by any measure of revenue impact or fairness, repealing the SALT cap entirely is the least desirable option.

The tax law enacted by President Trump and Congress on a party-line vote at the end of 2017 capped federal deductions for state and local taxes (SALT) at $10,000 to force residents of higher-tax states (often thought of as “blue” states) to partly pay for the tax cuts included in that law. This is not a fair or sound way to make tax policy.

But SALT cap repeal is not compatible with other goals sought by the current Congress and the Biden administration, such as raising revenue and making the federal tax system more progressive. Repealing the SALT cap would reduce federal revenue by around $100 billion in tax year 2022 alone and more than 60 percent of the benefits would go to the richest 1 percent. Black, Hispanic, and Indigenous families would be among the least likely to see any tax cut from SALT cap repeal.[2] As illustrated in the estimates that can be downloaded through the link at the top of this report, the vast majority of the benefits would go to the richest 5 percent of residents in every state and the District of Columbia. The richest 1 percent of residents would receive most of the benefits in all but four states.

The most practical solution is to replace the SALT cap with a different limit on tax breaks for the rich, which does not target certain states and that also raises revenue. For example, ITEP published its own proposal to replace the SALT cap (as well as the Alternative Minimum Tax) with what we call a High-Income Tax (HIT), which is an alternative tax that only applies to the very rich. The HIT would be a tax on adjusted gross income (AGI), with a $400,000 exemption that phases out for those with the highest incomes. No deductions or credits would be allowed against the HIT (except that the charitable deduction would be converted into a credit). The HIT would therefore restrict deductions and tax credits but would do so only for the very rich and would do so in a way that does not target SALT deductions specifically.

The HIT, or something like it, is the most logical solution for lawmakers who do not like the way that the SALT cap targets certain states. Lawmakers who reject this approach and want some other modification to the SALT cap are likely to turn to options that lose revenue. The rest of this report focuses on such options.

Besides full repeal of the SALT cap, this report presents three options to lessen the cap’s effects. Each would reduce revenue by around $30 billion in tax year 2022, compared to the $100 billion price tag of full repeal. The richest 20 percent of taxpayers would benefit almost exclusively from repeal of the SALT cap and from all these options. But the distribution of benefits within the top 20 percent varies from one approach to the next.

One option we examine would increase the cap on SALT deductions from $10,000 to $15,000 for unmarried taxpayers and $30,000 for married couples. Rep. Lauren Underwood of Illinois introduced a bill in the previous Congress and the current one that would make this change. This approach eliminates the marriage penalty embedded in the current design of the cap and is somewhat less regressive than outright repeal. The main benefit of this approach is its simplicity.

This option will be most appealing to lawmakers who claim the SALT cap harms middle-class taxpayers among their constituents. Some have expressed concern that the SALT cap affects households that seem relatively well-off based on national comparisons but who are really middle-income households in their particular high-cost state or district. As already explained, our estimates of the impacts of repealing the SALT cap show that there is no state in which the cap primarily affects residents in the middle of the income distribution. But this concern about the middle-class is nonetheless repeated frequently.

3) Allow taxpayers to choose the $10,000 SALT cap or deduct SALT exceeding 8% of their income.

The final option we examine would allow taxpayers to choose to be subject to either a) the current SALT cap of $10,000 or b) deduct any SALT in excess of 8 percent of their AGI. In other words, taxpayers would have the choice of either a cap or a floor. This option allows state and local governments to impose significant taxes on their richest residents with the knowledge that the federal government is effectively paying at least some of those taxes. This, it has been argued, encourages states to use progressive taxes to finance public investments and public services.

This option may be most appealing to lawmakers who claim that the SALT cap makes it difficult for states to have progressive taxes without pushing their richest residents to move to a state with lower taxes. In other words, for these lawmakers, the problem with the SALT cap is not its effect on the middle-class but rather its effect on the rich, who they believe will move out of high-tax states. In fact, the most comprehensive research suggests that it is very rare for high-income people to move across state lines for tax reasons and that very wealthy individuals generally relocate less frequently than other people.[3] But this concern is nonetheless repeated frequently. 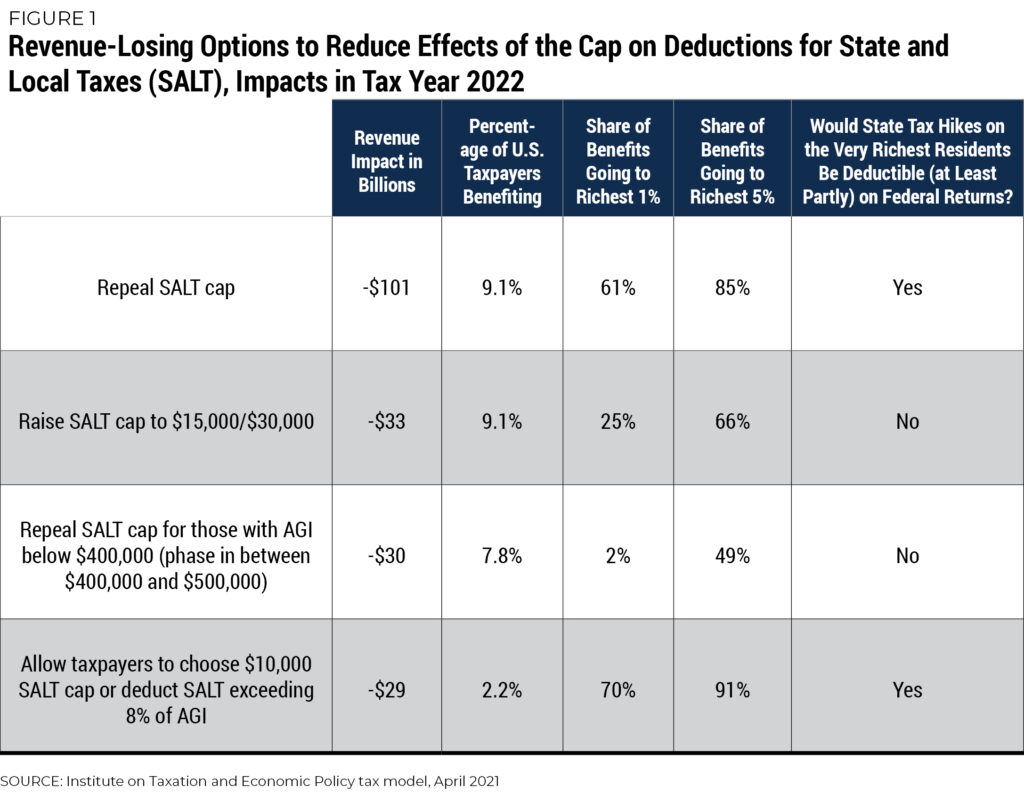 If lawmakers’ main concern is the “middle-class,” however defined, none of these proposals are particularly well-targeted to helping that group. As already mentioned, all these options would mainly help the richest 20 percent of taxpayers.

If the main concern is the middle-class, then the least appealing option is the one allowing taxpayers to use the current rule or deduct SALT exceeding 8 percent of their AGI. Under this option, 70 percent of the benefits would go to the richest 1 percent of taxpayers. This seems entirely incompatible with the goal of making the federal tax code more progressive.

But lawmakers will come to a different conclusion if their main concern is facilitating progressive state and local taxes that affect the very rich. To accomplish this, they might choose the option allowing taxpayers to use the current rule or deduct SALT exceeding 8 percent of their AGI. This is the one option (besides full repeal of the cap) that allows a federal deduction for the highest state taxes on the richest state residents, which some argue encourages progressive taxes at the state and local levels. For example, if a state enacts a very high income tax rate solely on millionaires, the resulting tax increase is likely to be at least partly deductible on those millionaires’ federal income tax returns under this option, meaning the federal government effectively pays some of that tax increase.

If Congress enacts the option allowing taxpayers to use the current rule or deduct SALT exceeding 8 percent of their AGI, states could respond by raising taxes on the top 1 percent of earners, somewhat blunting its regressivity. But many states lack income taxes, are constitutionally required to levy flat-rate income taxes or have legislatures and governors who are unlikely to pursue progressive tax increases anytime soon. In practice, the overwhelming majority of tax cuts under this approach would flow to a small number of “blue” states. We estimate that in 2022, nearly nine in ten (or 89 percent of) tax cut dollars under this approach would flow to just three states: California, New Jersey, and New York. Lowering the floor to a level below 8 percent would expand the deduction’s reach to taxpayers in more states, but at a potentially high cost to the federal budget.

Figure 2 provides the percentage of taxpayers who benefit from full repeal of the SALT cap and from each proposal. 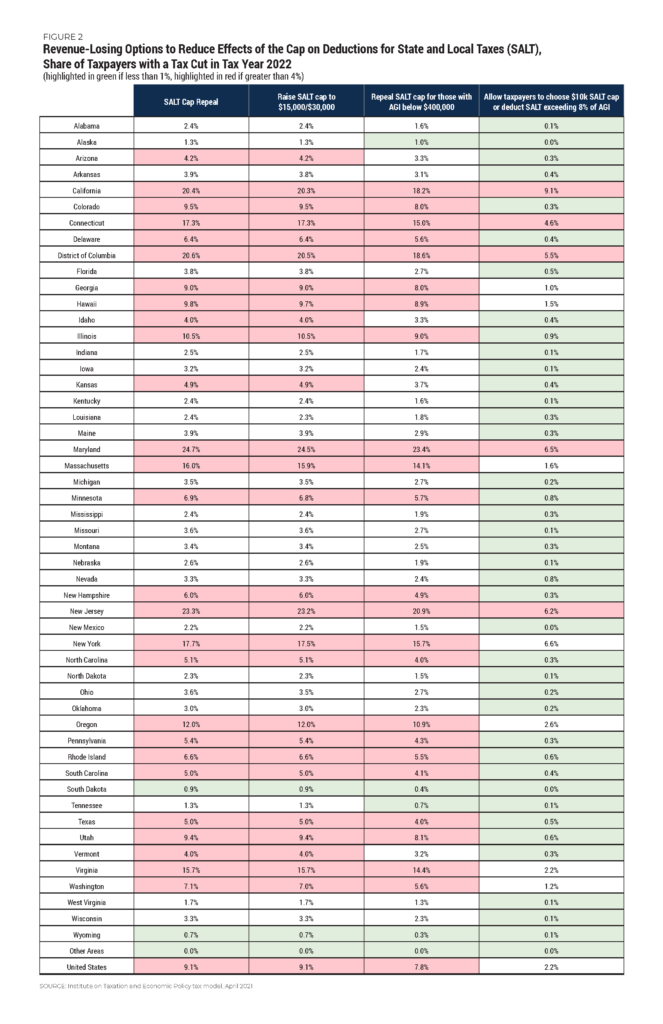 Even in states with the most residents affected, less than a quarter of residents would benefit from repeal of the SALT cap. The other options would benefit a similar or smaller percentage of taxpayers in each state.

The states with the highest share of residents benefiting from repeal or from any of these options are California, Connecticut, the District of Columbia, Maryland, New Jersey and New York. But most of those residents would receive a relatively small tax cut, as illustrated in the figures that can be downloaded with the link at the top of this report, and most of the benefits would go to the rich even in these states.

Repealing the cap on state and local tax payments (SALT) would cost roughly $100 billion per year in federal revenue, with 85 percent of that lost revenue flowing to the top 5 percent of taxpayers, who will have incomes above $275,000 next year. Pursuing a tax change of this type in the upcoming tax and spending package is likely to crowd out other much more progressive policies and programs from that legislation.

Previous ITEP research has shown that Congress has options for replacing the SALT cap with a broader and more effective limit on tax breaks for the rich that could raise revenue and improve the progressivity of the federal tax system. If Congress insists on a narrower rewrite of the laws governing the SALT deduction, the inevitable result is a regressive and revenue-losing policy change.

This report looked at three options for such a change: boosting the dollar cap, repealing the cap only for households with income below $400,000, or allowing taxpayers to choose between a SALT cap and a SALT floor. Any of these options would cost about one-third the amount of full SALT cap repeal and would direct nearly all their benefits to the top 20 percent of earners—though the distribution of tax cuts within the top 20 percent varies across options.

Lawmakers who believe that reinstating the SALT deduction for the very rich will encourage progressive state revenue-raising and discourage tax flight should be most interested in some type of floor. On the other hand, lawmakers who are concerned by the impact of the SALT cap on upper-middle class taxpayers in their states are likely to prefer the option eliminating the cap for taxpayers with income below $400,000. 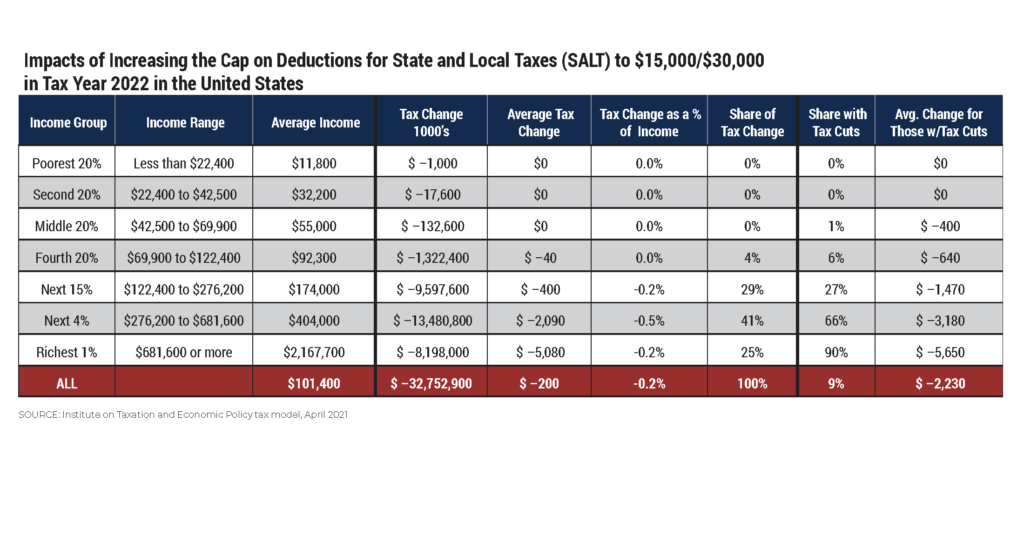 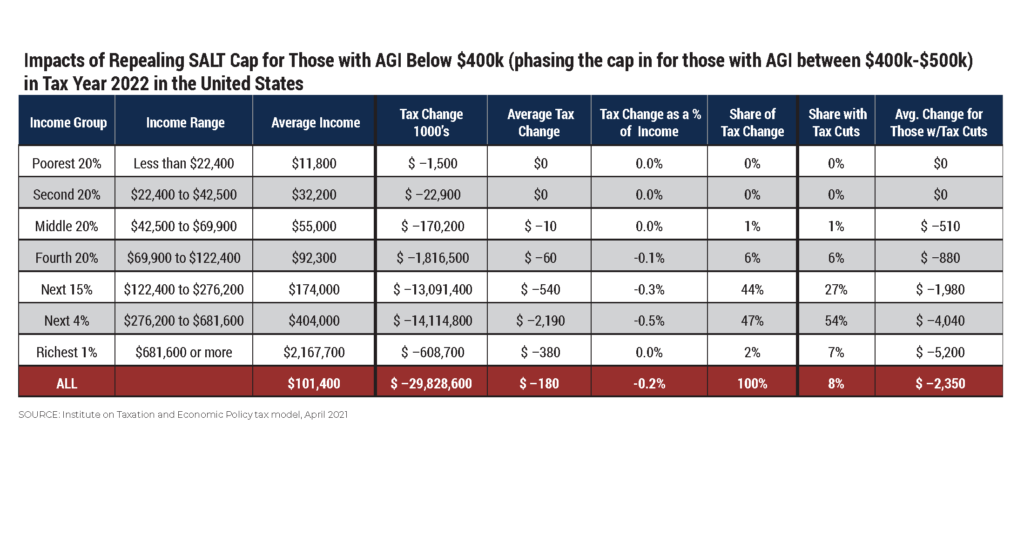 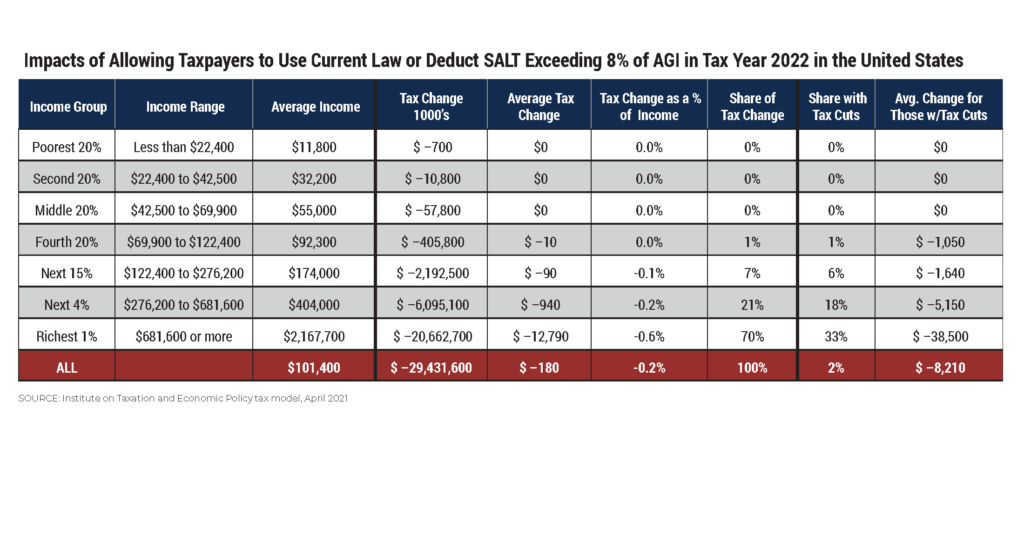