This report was updated June 2015

Read this report in PDF Form

The gasoline tax is the single largest source of funding for transportation infrastructure in the United States, but the tax is on an unsustainable course. Sluggish gas tax revenue growth has put strain on transportation budgets at the federal and state levels, and has led to countless debates around the country about how best to pay for America’s infrastructure.

One increasingly discussed option is to start taxing Americans per mile that they drive. This “vehicle miles traveled tax” (VMT tax) could either supplement or replace the existing gas tax.

Short-term VMT tax pilot projects involving a small number of volunteers have been carried outin more than a dozen states in order to test the technology needed to record and report vehicle mileage.1 None of these projects was as large as Oregon’s newest experiment, however, which by 2015 will give 5,000 drivers the option of permanently exempting themselves from the gas tax in exchange for paying a new VMT tax.2 Similar, large-scale experiments could be coming to other states in the not-so-distant future. Federal legislation that would provide $30 million in funding to help states conduct Oregon-style VMT tax experiments, or even implement a VMT tax on a mandatory basis, was recently introduced in the U.S. House of Representatives.3

Unfortunately, the structure of Oregon’s new law, and much of the discussion surrounding it, suggest that there is a widespread misunderstanding of the reasons the gas tax is failing to raise enough revenue for transportation. While Oregon’s VMT tax has the potential to eventually address one of the challenges facing the gas tax (fuel efficiency gains), it completely ignores another important challenge (construction cost inflation). This is especially problematic because construction cost growth has historically been the more important issue. This report finds that for every $1 that fuel efficiency gains drained from the purchasing power of the nation’s transportation funds over the last twenty years, inflation has taken a much larger $4.08.

Despite all the attention given to long-term transportation revenue issues in Oregon, the state’s new VMT tax is an unsustainable revenue source because it contains the same design flaw that has plagued the state’s gasoline tax for almost a century—a stagnant, fixed tax rate that is incapable of keeping pace with inflation.

This report explains the transportation funding challenges posed by fuel efficiency and inflation, and discusses how Oregon’s new law fits into this context. It concludes that if lawmakers are serious about fixing the problems with their transportation revenue streams, they must first address inflation by “indexing” their gas tax rates so that they gradually rise over time.

Experiments focusing on how to deal with the revenue loss caused by fuel efficiency growth are worthwhile. But they are not an excuse to delay implementing the much more straightforward solution to inflation-induced revenue shortfalls that is already within reach.

In recent years, the volume of gasoline sold per mile driven has been on the decline as vehicles have become more fuel efficient.4 According to the Federal Highway Administration, the average fuel efficiency of a passenger vehicle on America’s roadways has increased by roughly 11 percent over the last two decades—from 19.4 to 21.6 miles per gallon.5 For a vehicle with a 15 gallon gas tank, this means that the average driver is able to wear down the roadways with 33 extra miles of driving before they have to stop, refuel, and pay anything in gas taxes.

While this 11 percent growth has had only a limited impact on gas tax collections so far, federal standards will require a 67 percent improvement in the fuel efficiency of new vehicles by 2025 (the full impact of this change likely won’t be felt until 2040, however, when most older and less efficient vehicles are no longer in use).6 In other words, while growth in vehicle fuel efficiency is a relatively small contributor to the gas tax revenue shortfalls occurring today, it will become an increasingly important issue in the years ahead.

The second challenge confronting the gas tax is its shrinking tax rate. Unlike most taxes that are levied on a percentage-basis (e.g., 5 percent of a product’s price or 10 percent of a taxpayer’s income) the gasoline tax is typically levied as a fixed number of cents per gallon.

As lawmakers have long known, however, writing fixed dollar amounts into the tax law inevitably creates problems in the medium- and long-term as inflation erodes their “real” value. For this reason, many features of federal and state income tax law are specifically designed to rise in lockstep with inflation each year. Oregon’s income tax is no exception in this regard as its tax brackets, standard deduction, personal exemption credit, and various other provisions automatically grow alongside inflation each year. The basic income tax credit available to most Oregonians, for example, increased from $179 per person in 2011, to $183 in 2012, and then to $188 in 2013. Unfortunately, this familiar type of “inflation indexing” has yet to be adopted with respect to the gas tax at the federal level, in Oregon, and in most other states.7

Figure 1 shows the impact of inflation on Oregon’s gas tax rate since its creation in 1919.8 Given the long, generally downward trend in the state’s real gas tax rate, there is no doubt that Oregon’s transportation revenues would be on an unsustainable course even if fuel efficiency growth were not chipping away at the tax base.

Figure 1 shows the impact of infl ation on Oregon’s gas tax rate since its creation in 1919. 8 Given the long, generally downward
trend in the state’s real gas tax rate, there is no doubt that Oregon’s transportation revenues would be on an unsustainable course
even if fuel effi ciency growth were not chipping away at the tax base. 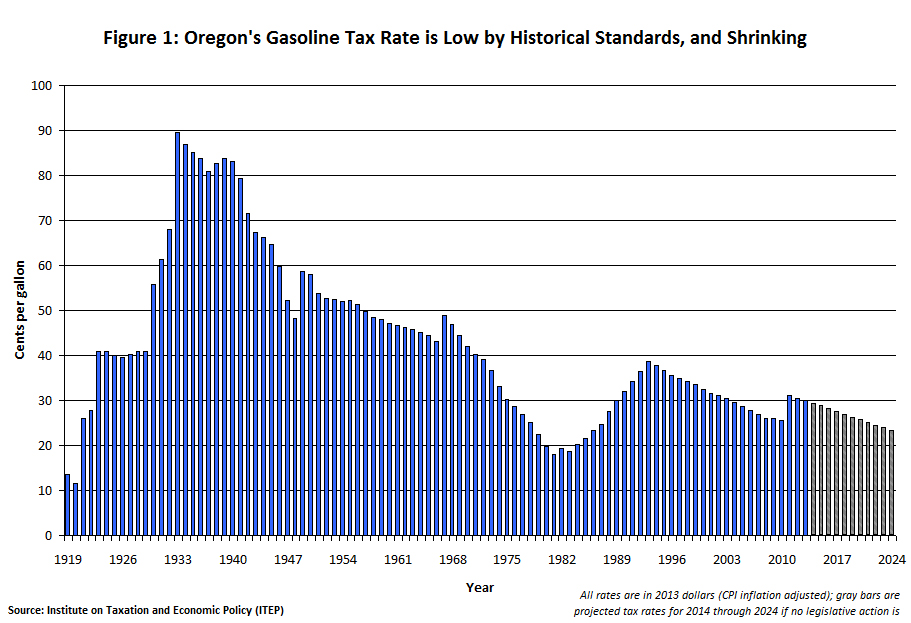 Oregon is by no means alone in seeing its gas tax rate eroded by inflation. The federal gas tax is more than 3 cents below its historical average and ten states—Alabama, Alaska, Delaware, Idaho, Iowa, Nebraska, New Jersey, South Carolina, Utah, and Virginia—are actually levying their gas taxes at a lower rate than at any point in their history.10 Altogether, at least thirty-two states will see declines in their stagnant, fixed-rate gas tax rates in the years ahead unless legislation is enacted raising those rates.11

Clearly, both tax base erosion and tax rate erosion are impacting gas tax revenue collections. But which has played the larger role in creating the funding shortfalls that exist today?

Over the same twenty year period that national, on-road fuel efficiency improved by 11 percent, transportation construction costs grew by 68 percent.12 The result is that for every $1 that fuel efficiency gains drained from the purchasing power of the nation’s transportation funds, inflation has taken a much larger $4.08.13

As noted earlier, fuel efficiency gains are expected to accelerate in the years ahead and may eventually surpass inflation as the larger transportation funding challenge. But it is an important, and often overlooked, fact that the transportation funding predicaments lawmakers are wrestling with today are driven more by their lack of planning for inflation than by more novel developments like hybrid and alternative fuel vehicles.

Oregon’s decision to implement the most ambitious VMT tax experiment in U.S. history has been praised by many in the transportation community as a model of forward-looking thinking. Indeed, as cars gradually transition away from gasoline as their primary means of propulsion, something akin to the VMT tax will eventually have to be implemented if drivers are going to continue to pay for their use of the roads. There is no doubt that Oregon’s new law, if successfully implemented on a comprehensive and mandatory basis, would be immune from tax base erosion occurring because of rising fuel efficiency.

On the issue of tax rates, however, the Oregon VMT tax is no improvement at all compared to the status quo. Just as with Oregon’s current gas tax, the state’s new VMT tax law uses a fixed-rate structure that is totally unprepared to deal with inflation’s inevitable impact. Under the new law, drivers a decade from now will pay the same 1.5 cents per mile that they will when the program first goes live in 2015. This is despite the fact that 1.5 cents is guaranteed to buy less asphalt, machinery, and labor in 2025 as these construction inputs gradually become more expensive.

If cost growth in the construction industry mirrors the Congressional Budget Office’s projections for inflation in broader economy, that 1.5 cent tax rate will need to increase to 1.89 cents by 2025 just to allow for a consistent level of investment in infrastructure.14

When it comes to planning for inflation, there is no difference whatsoever between taxing drivers at a flat rate of 1.5 cents per mile driven, or taxing them at 30 cents per gallon of gasoline purchased.15 Under either system, revenues will not keep pace with costs in the medium- and long-term.

Will History Repeat Itself?

The federal government and thirty-two states, including Oregon, levy fixed rate gas taxes that are vulnerable to the impact of inflation. Oddly enough, this design flaw can actually be traced back to Oregon, which implemented the nation’s first gasoline tax in 1919 at a fixed-rate of 1 cent per gallon. Within 10 years, every state followed suit with their own fixed-rate gas taxes patterned after Oregon’s law.16

Given the national attention that Oregon’s VMT tax experiment has received, it is unfortunate that lawmakers did not set a better example this time around by crafting the law in a way that addresses the revenue challenges posed by both fuel efficiency gains and construction cost inflation. But with the vast majority of states unlikely to implement VMT taxes in the near future, Oregon still has time to correct this flaw by indexing its VMT tax rate as it tries to once again lead the nation toward a new way of funding transportation.

Transitioning from a pay-per-gallon gas tax to a pay-per-mile VMT tax will not necessarily put federal and state transportation revenues on a sustainable course. If the tax rate levied under a VMT tax is not allowed to grow alongside the inflation rate, revenues will quickly begin to lag behind the cost of building and maintaining the nation’s infrastructure—much as gas tax revenues have for decades. Lawmakers interested in adequately funding transportation on an ongoing basis should immediately index their gas tax rates to inflation, and should be aware that such indexing will also be needed under any VMT tax they might enact.

4 For simplicity, we set aside the impact of reduced driving on the gasoline tax base. Unlike fuel efficiency and inflation concerns, this is a more nuanced issue because it impacts not only transportation revenues, but also the demand for transportation infrastructure itself (both in the aggregate and in the relative demand for different modes of transportation). For more on Americans’ changing driving habits, see U.S. PIRG’s reports: “Transportation and the New Generation,” available at: http://www.uspirg.org/reports/usp/transportation-and-new-generation and “A New Direction,” available at: http://uspirg.org/reports/usp/new-direction.

6 Institute on Taxation and Economic Policy. “A Federal Gas Tax for the Future.” September 22, 2013. Available at: https://itep.org/itep_reports/2013/09/afederal-gas-tax-for-the-future.php.

9 ITEP calculations for 2014-2024 are based on inflation projections from: Congressional Budget Office. “The Budget and Economic Outlook: 2014 to 2024.”February 2014. Available at: http://www.cbo.gov/sites/default/files/cbofiles/attachments/45010-Outlook2014.pdf.

11 Note 7 lists the eighteen exceptions: those states with variable-rate gas taxes. But since most of these eighteen states link their gas tax rates to gas prices, rather than directly to inflation, even these states could see their “real” gas tax rates decline in the years ahead if gas prices grow more slowly than the general inflation rate.

15 It is possible that Oregon’s new VMT tax was intentionally given an unsustainable, fixed-rate structure in order to maintain some rough parity with the state’s unsustainable, fixed-rate gasoline tax. Given that the issue of transportation revenue sustainability has been a major topic of discussion in Oregon, however, intentionally copying one of the gas tax’s least sustainable characteristics into the state’s nascent VMT tax—rather than fixing it in both the gas tax and the VMT tax—is hardly justifiable.