State lawmakers who want to send public dollars to private schools have devised a shrewd tactic for getting around political and constitutional obstacles that make it difficult to do so. These lawmakers found a way to pay high-income taxpayers to fund those schools on states’ behalf, sometimes even offering those taxpayers a tidy profit in exchange for agreeing to play along. While one of these profit schemes has received significant attention in recent months, another scheme reserved for successful investors has attracted less notice.

At issue are voucher tax credits, under which high-income donors give money to private school voucher funds and are later reimbursed for those “gifts,” in whole or in part, with state tax credits. Depending on the details of the credit’s design, donors often walk away from the exchange having made no financial sacrifice whatsoever. In other cases, the deal donors receive is even sweeter: more money back in tax cuts than they ever donated in the first place. In other words, some donors are turning a risk-free profit in exchange for their faux “generosity.” 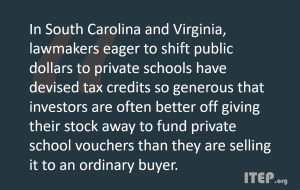 The most common way that voucher tax credits are exploited to turn a profit is when donors, having already been reimbursed for their “donations” with state tax credits, nonetheless claim those donations as deductible charitable gifts on their federal tax forms. Inexplicably, the IRS currently allows this practice—though ITEP and the School Superintendents Association have urged it to reconsider.

But there is another voucher tax shelter that is less widely known, though still highly profitable for donors in at least two states: South Carolina and Virginia. This shelter is reserved exclusively for successful investors, a group overwhelmingly comprised of high-income earners.

Here’s how it works, using an example of an investor in South Carolina who purchased stock at a price of $80,000, and who has seen that stock grow in value to $200,000 today. (A more detailed walkthrough of this example is available in the table at the end of this article.)

But a very high-income taxpayer in this situation would be foolish to sell her stock. In South Carolina and Virginia, lawmakers eager to shift public dollars to private schools have devised tax credits so generous that investors are often better off giving their stock away to fund private school vouchers than they are selling it to an ordinary buyer.

If the investor in the above scenario donates her $200,000 stock to fund private school vouchers, the South Carolina government would pay her for her donation with a $200,000 state tax credit (Virginia offers a somewhat smaller credit). For a very-high-income taxpayer with enough state tax liability to make use of this credit, the value of this $200,000 tax credit is identical to the $200,000 in cash that could have been collected by selling the stock on the open market. In other words, $200,000 is $200,000 regardless of what form it takes. But the tax code doesn’t see it that way.

By “donating” this $200,000 stock, the taxpayer in this scenario avoids paying any federal or state capital gains tax (30.8 percent) on the $120,000 gain in the stock’s value. She received $200,000 in tax credits in exchange for her stock, but the flimsy pretense of having “donated” the stock frees her from having to pay tax on the portion of that payment that amounts to an investment earning.

As with many tax shelters, the technical details of this one can be hard to follow. The bottom line is this: in South Carolina and Virginia, investors can avoid paying tax on their stock market gains by pretending that they generously gave their stock away to support private school vouchers. But these “gifts” are not true charitable acts because the investors have been paid for their donations with lucrative state tax credits.

When taxpayers are paid for their donations of stock, those payments should be taxed. Whether the payment takes the form of a direct cash payment or a state tax credit is unimportant, because the financial consequences for the seller are often identical. This is a reform that Congress can and should enact. The alternative is a distortionary boondoggle in which many investors are finding it more beneficial to give their stock away to support private school vouchers than to sell it on the open market. 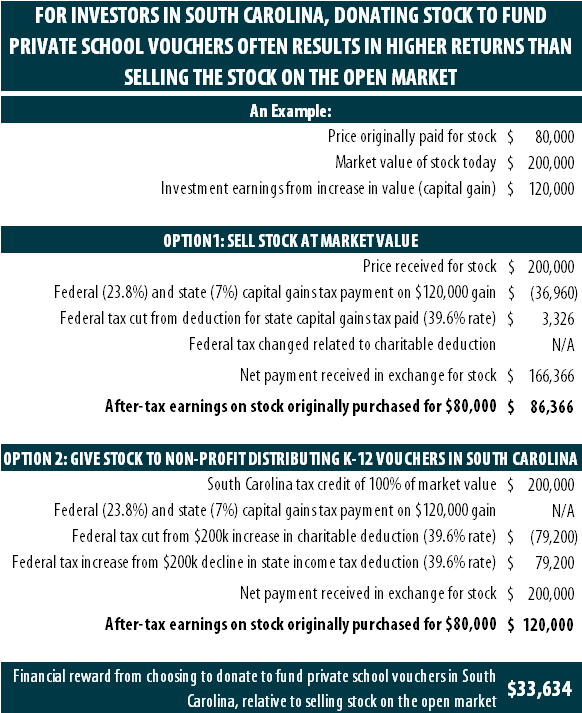