Yesterday evening, the chair of the House Transportation Committee, Rep. Bill Shuster (R-PA), proposed a significant infrastructure funding plan under the banner of “Building a 21st Century Infrastructure.” Included in the proposal are increasing the federal gasoline tax by 15 cents and the diesel tax by 20 cents, indexing both tax rates to inflation for a few years, and then repealing the taxes entirely in 2028. While these reforms would generate an important short-term funding boost for the nation’s infrastructure, the plan overall leaves much to be desired. This article examines the good aspects of Rep. Shuster’s infrastructure funding plan (a higher gas tax that is indexed to inflation), the bad (a flawed indexing formula and eventual gas tax repeal), and the downright ugly (tying the hands of a funding commission before their work even begins and refusing to ask more of high-income households).

Increasing the federal gas tax is long overdue. The current rate has remained unchanged for almost 25 years—longer than any other period since the tax was created in 1932. As Figure 1 shows, the only other time lawmakers waited more than 20 years without adjusting the tax rate was in the 1980s, and President Ronald Reagan helped break that streak by signing a bill that more than doubled the tax. 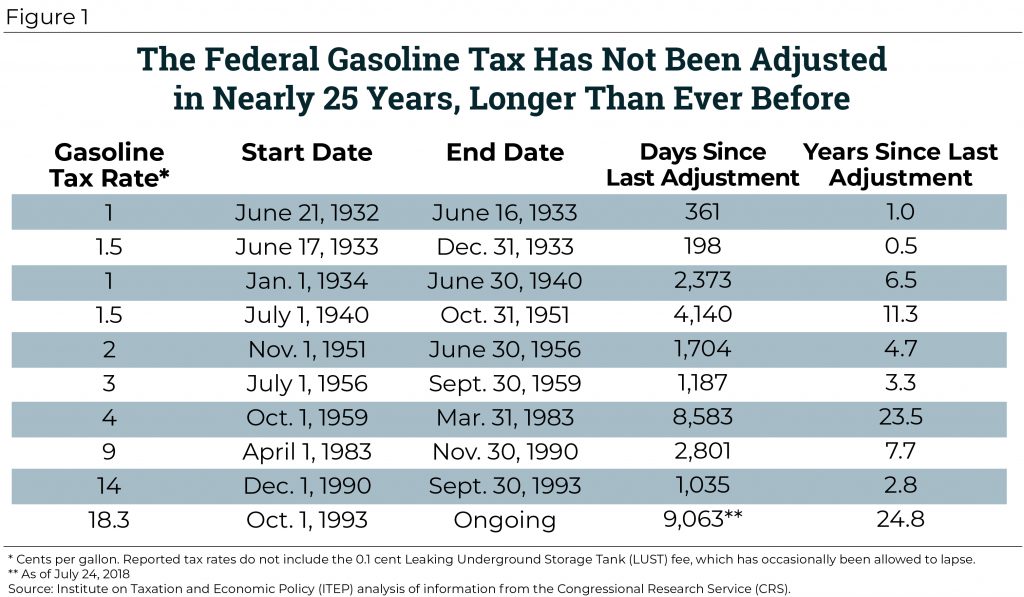 Federal lawmakers set the current gas tax rate of 18.3 cents per gallon in 1993. Both construction cost inflation and vehicle fuel-efficiency gains have since taken a sizable bite out of the tax’s purchasing power.

Between 1993 and 2018, average fuel-efficiency improved by approximately 20 percent (from 19.3 to 23.2 miles per gallon). Assuming a fairly typical 15-gallon gas tank, this means that the average driver can travel almost 60 miles further before they need to stop, refuel, and pay anything in gas tax. Those 60 extra miles of driving are generating wear-and-tear on the nation’s roads, without requiring any offsetting gas tax payment to cover the cost.

But fuel-efficiency gains are not the most important factor contributing to our nation’s infrastructure funding shortfall. While fuel-efficiency improved, highway construction costs more than doubled (a 131 percent increase). This rapid growth (outpacing the 74 percent increase in the price of consumer goods and services) was due in part to the higher price of asphalt, diesel fuel, and other petroleum products involved in building and maintaining roads and bridges. 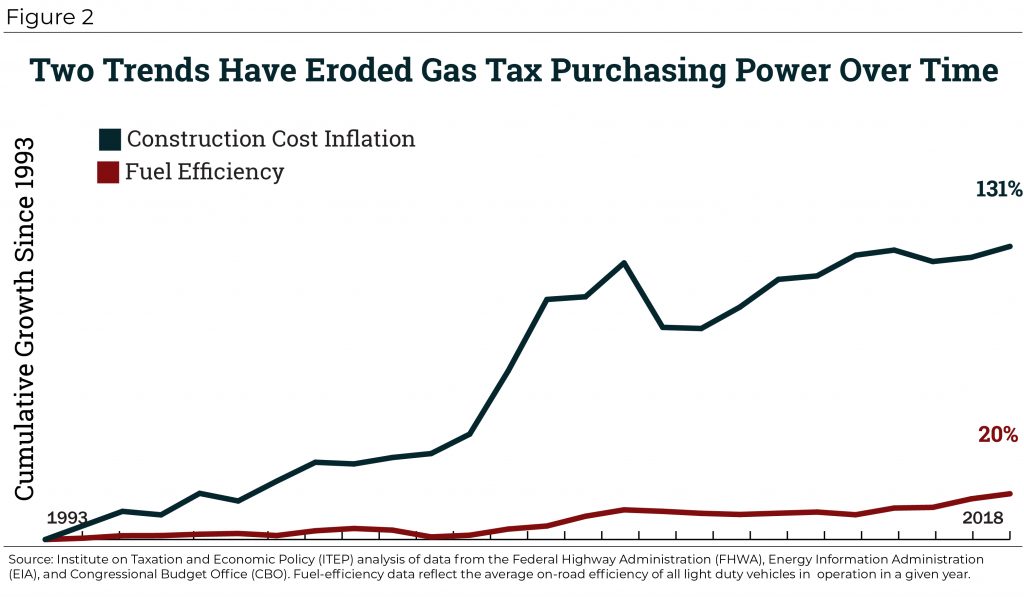 Taken together, these two factors have reduced the purchasing power of the 18.3 cent gasoline tax by 64 percent. Just to make up lost ground, the rate today would need to increase by nearly 33 cents, to 50.8 cents per gallon. In this light, the 15-cent increase proposed by Rep. Shuster is modest. 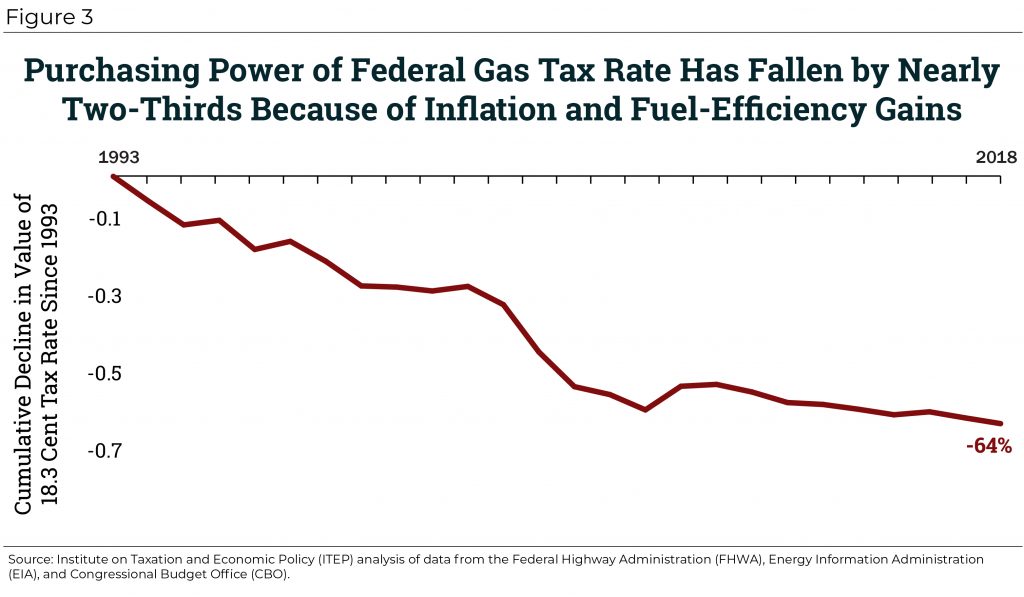 To mitigate this problem, Rep. Shuster’s proposal includes indexing gas and diesel tax rates to inflation starting in 2022, once the initial 15 and 20 cent increases are fully implemented. Inflation indexing is a sensible policy and is increasingly widespread at the state level.

As Figure 4 shows, this indexing provision will raise the gasoline tax rate to roughly 39.4 cents per gallon by 2028—more than doubling the existing 18.3 cent tax. (The diesel tax would rise to 52.4 cents per gallon, compared to 24.3 cents today.) This would still fall far short of the rate needed to achieve 1993-level purchasing power in 2028, however. While there is considerable uncertainty in the projections, the best available data suggest that an 83.8 cent per gallon rate will be needed in 2028 if lawmakers wish to match the purchasing power that the 18.3 cent rate had in 1993. 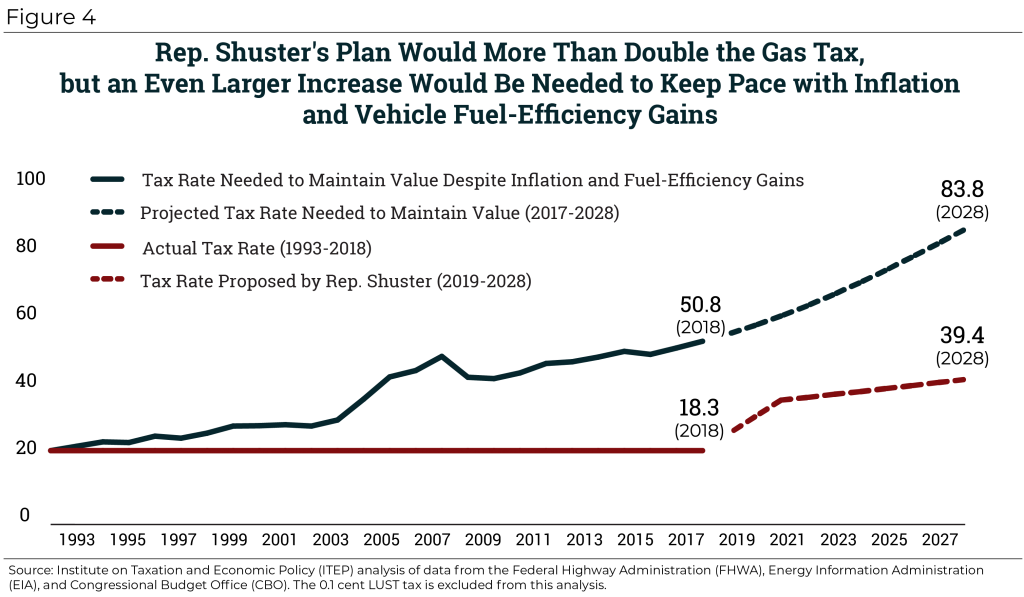 A final bit of good news is that the plan includes a forward-looking idea to establish a national pilot project that will assess the feasibility of taxing drivers based on the number of miles they travel rather than the number of gallons of fuel they purchase. The bill refers to this as a “per-mile user fee” and holds it up as one way to “restore and maintain the long-term solvency of the Highway Trust Fund.” While a pay-per-mile tax has long-run appeal as electric vehicles gradually become more common, it is important to keep in mind that transitioning to such a tax will not eliminate the need for inflation-indexing. As ITEP explained in a report on this subject, a pay-per-mile tax that is not indexed for inflation will be unsustainable in much the same way as our existing, unindexed gas tax. Put another way, inflation indexing should be a core feature of our transportation finance system today and for years to come, regardless of whether drivers are being taxed per gallon or per mile.

While gas tax rate indexing is vital to shoring up the gas tax against possible losses in purchasing power, the specific formula suggested by Rep. Shuster falls short of fully accomplishing this goal.

As mentioned above, the gas tax is under pressure on two fronts: rising construction costs and improving vehicle fuel-efficiency. Inflation indexing of the type contained in this plan can help maintain the tax’s value even in the face of rising costs, but it does nothing to keep the tax’s value intact as vehicles gradually become more efficient. To solve that problem, lawmakers should look to Georgia, which recently began indexing its gas tax rate to rise alongside gains in the average efficiency of vehicles registered in the state.

To take a simple example: if the average vehicle registered in Georgia becomes 3 percent more efficient from one year to the next, the state’s gas tax will increase by 3 percent as well to ensure that gas tax dollars per mile driven do not decline.

The U.S. Energy Information Administration (EIA) currently forecasts that average on-road fuel efficiency will improve by 22 percent over the 7 years during which indexing would be in effect under Rep. Shuster’s plan (2022-2028). While that 22 percent gain would be a good thing for drivers, the environment, and the nation’s energy independence, it would take a sizeable bite out of any gas tax not automatically adjusted to compensate for this trend. Tying the tax rate not just to inflation, but to vehicle fuel-efficiency as well, is a straightforward way to prepare for this inevitable development.

A more serious problem with the plan’s long-run approach to the gas tax, however, is that the tax would be repealed in its entirety on Oct. 1, 2028. The plan does not go into detail as to why full repeal is necessary, but the implication seems to be that the gas tax will be obsolete by 2028 and lawmakers should move quickly to implement a more “innovative” funding model.

If this is indeed the rationale behind full repeal, then it is mistaken.

According to data from the Energy Information Administration (EIA), 89 percent of light duty vehicles on the road today are powered by traditional gasoline or diesel combustion engines (not including hybrids, electric vehicles, or other alternative fuel vehicles). While this fraction will fall in the years ahead, the expected decline is not nearly dramatic enough to render the gas tax wholly obsolete. EIA projects that 84 percent of vehicles in operation in 2028 will still be powered by traditional gas or diesel engines, and that 79 percent will be of this type in 2038. The share of electric vehicles on the road in those years (including plug-in hybrids) will rise from just 0.4 percent today to 3.4 percent in 2028 and 7.6 percent in 2038.

Owners of fully electric vehicles do not directly contribute gas tax dollars into the nation’s infrastructure funding account, and Rep. Shuster understandably wants these drivers to pay more for the infrastructure they use every day. But the existence of some electric vehicles is not a reason to abandon the gas tax entirely. Most drivers will continue to drive traditional vehicles for decades to come, and the gas tax will remain a viable way to require these drivers to pay for roads and other projects. Rather than uproot the nation’s most important source of infrastructure funding because of the existence of a relatively small fraction of electric vehicles, it may make more sense to complement the existing gas tax with other taxes on electric vehicle owners meant to achieve some level of parity between different classes of vehicles.

Rep. Shuster’s proposal includes a provision that is surely familiar to anyone who follows transportation funding issues: a new commission meant to study ways to pay for the nation’s infrastructure. While appointing a commission is harmless enough, the proposal takes an ugly turn in tying the commission’s hands by forbidding it from recommending that the gas tax be reinstated following its repeal in 2028. This pre-judging of the gas tax is highly worrisome and likely to lead to a flawed recommendation.

The gas tax is an exceptionally efficient way of funding infrastructure, and yet this proposal would jettison the tax entirely after just 10 years and would forbid the group charged with examining the issue from even considering whether this is a wise decision. If this commission is created, it should be allowed to do its work without politically motivated constraints on options it may consider.

Finally, the timing and lack of balance in this proposal is jarring. We are less than a year removed from a tax policy debate in which Congress weighed a multitude of ways to cut taxes by $1.5 trillion over 10 years with almost no meaningful discussion of the policy tradeoffs associated with forgoing that revenue. Now, just a few months later, Rep. Shuster is rightly suggesting that the federal government does not collect enough revenue to maintain the nation’s infrastructure. His solution is to raise taxes by approximately $224 billion over 10 years.

Drivers should be forgiven if they can’t help but feel like they’re suffering from whiplash.

A recent ITEP report found that last year’s tax bill will steer approximately $70 billion in tax cuts per year to the richest 1 percent of taxpayers. This is despite the fact that, prior to the bill’s enactment, a mere 10 percent of Americans thought that upper-income households were paying “too much” in federal taxes.

Rather than raising taxes on drivers, the amount of funding sought by Rep. Shuster could have been secured by rolling back less than half of the tax cuts flowing to the nation’s most fortunate families.

While there are good reasons to raise the gas tax, such a change will disproportionately impact lower- and moderate-income drivers. Pairing this reform with revenue-raising ideas that ask more of the wealthy, who just fared extremely well under last year’s federal tax bill, would help send a message that all of us need to make a meaningful contribution toward the infrastructure we use every day.