South Carolina lawmakers this week raised the state’s gas tax for the first time in 28 years, a time period that tied for the third-longest in the nation. While the increase was meaningful and hard-fought, the final result remains flawed in ways that could have been easily remedied or avoided.

The biggest positive of the bill is that, once fully phased in, it will raise $600 million per year of needed revenue for the state’s ailing infrastructure through a combination of increased license and registration fees, a higher cap on the vehicle sales tax, and the 12-cent per gallon gas tax increase that is phased in over six years. This will fall short of the estimated $1 billion needed, but is an improvement nonetheless. And lawmakers overcame the opposition and eventual veto of Gov. Henry McMaster, requiring supermajority votes in both houses to enact the measure.

It is also laudable that for the most part, they resisted efforts to tack on costly, regressive, unrelated tax cuts to “offset” the effect of the gas tax increase. Some other states haven’t fared as well on that point: Tennessee’s lawmakers tied this year’s gas tax increase to a cut in the state’s Hall Tax on the investment income of very wealthy families, and last year some New Jersey lawmakers held the gas tax increase   hostage to assure elimination of the completely unrelated estate tax. Moreover, the tax cuts in both of those states were about as large as the tax increases, meaning they raised money to repair crumbling roads and bridges at the expense of schools, public safety programs, and health care, all while shifting the funding responsibility off of wealthy residents and onto low- and middle-income families. South Carolina’s legislators did not cut taxes to such an extent, so the bill brings in meaningful revenue without robbing funding from other priorities.

However, some components added to the bill in the last few weeks are so poorly designed to meet their putative goals that it appears they were not intended to achieve those goals at all.

First among these is the creation of a nonrefundable Earned Income Tax Credit (EITC) valued at 125 percent of the federal credit. While this technically adds South Carolina to the list of states with their own EITCs and on the surface looks quite impressive, the nonrefundable nature of the credit and its interaction with the rest of South Carolina’s income tax code render it meaningless to the vast majority of the state’s low- and middle-income families, precisely those who will be hardest hit by the gas tax increase. Low- and middle-income families tend to pay much more in state consumption taxes such as sales and gas taxes than they do in state income taxes, and the main advantage of a state EITC is that if it is refundable it helps offset that fact by reducing a working family’s state income tax liability below zero to help them pay those other taxes that represent a large portion of their budgets. 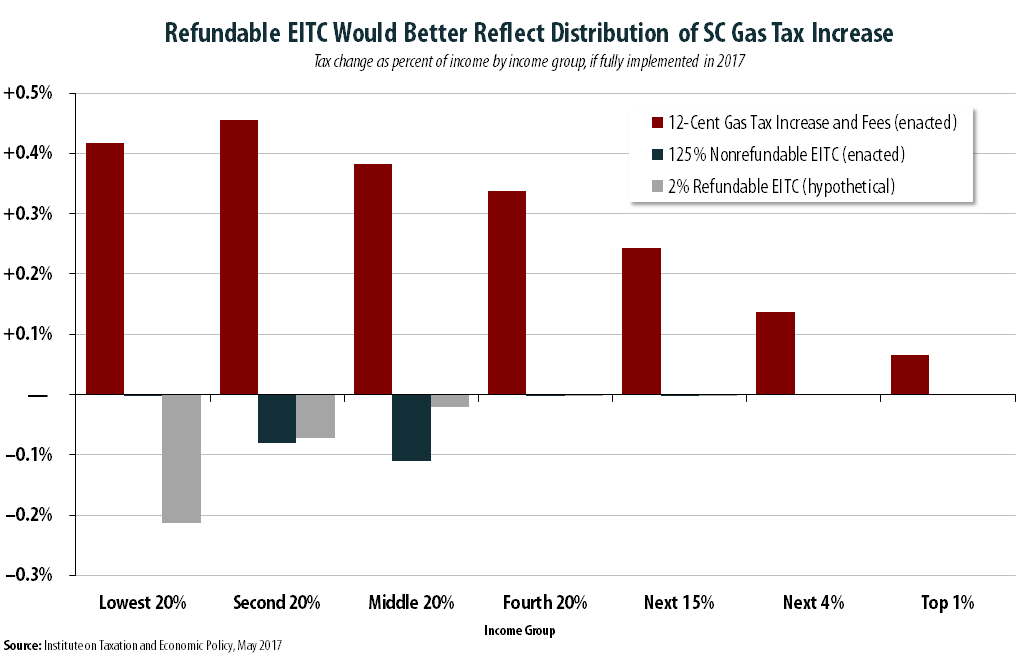 A second flaw of the bill is a convoluted new credit for preventative maintenance to vehicles. To claim the credit, South Carolinians must save all their vehicle maintenance and gas tax receipts, and then claim a credit equal to either the total of their maintenance spending or their total increase in gas taxes resulting from the bill, whichever is smaller. And on top of all that, the department of revenue has to adhere to an annual cap on the credit ($114 million once fully phased in), so must estimate how many people will claim the credit and provide an adjustment factor for people to use when calculating their individual credits. This credit is so burdensome to comply with that it is hard to imagine very many people keeping the painstaking records necessary to do so, which may have been the legislators’ intent all along.

The final major flaw in the legislation is legislators’ decision to drop a provision that would have indexed the gas tax rate to inflation. If the goal was truly to update the tax structure and keep it updated to keep funding in line with needs, that provision would have gone a long way to ensuring a sustainable funding stream. Instead, without further action revenues will inevitably fall behind needs once again and this debate will have to be repeated while those needs go unmet.

In the end, lawmakers passed a bill that will do more good than harm. The gas tax update is partial and not sustainable, but is vastly better than another year of stalemate on the issue. The EITC is nonrefundable and will leave out the state’s lowest-income residents, but will provide help to some middle-income South Carolinians and can always be improved in the future. Most of the debates to settle differences on this bill took place behind closed doors with no public input. Had lawmakers been willing to listen to constructive criticism from their constituents and experts in the state, they may have reached a better outcome, but they do deserve credit for getting the bill over the finish line, and overcoming the hurdle of Gov. McMaster’s veto along the way.