Excise and sales taxes on cannabis raised more than $1.9 billion in 2019. This represents a jump of nearly half a billion dollars, or 33 percent, compared to a year earlier. These are the findings of an ITEP analysis of newly released tax revenue data from the eight states where legal sales of adult–use cannabis took place last year. 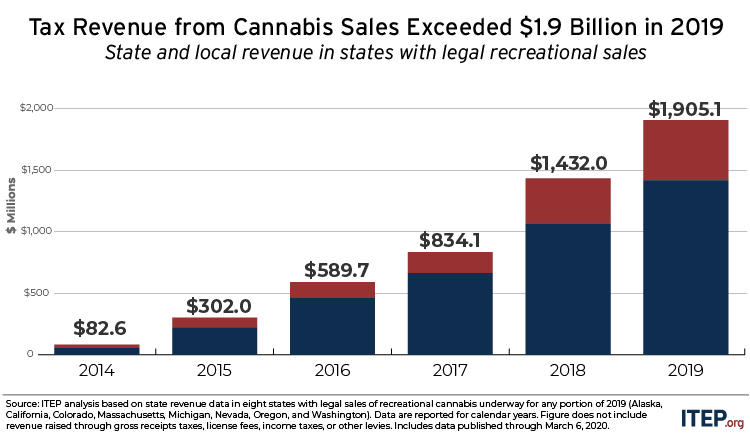 While revenue growth has been strong and is likely to remain strong this year, there are also clouds on the horizon in states that have built their tax structures entirely around taxing the price of cannabis sales. More on that later.

Nearly half of the tax revenue increase from 2018 to 2019 is due to the rapid expansion of California’s much-maligned cannabis market. California had the nation’s fastest cannabis tax revenue growth between 2018 and 2019 as the state’s relatively new market (established January 2018) has been ramping up to meet demand. Comparing the final quarter of 2019 to the same period in 2018, California’s excise and sales tax collections from cannabis grew by 43 percent. 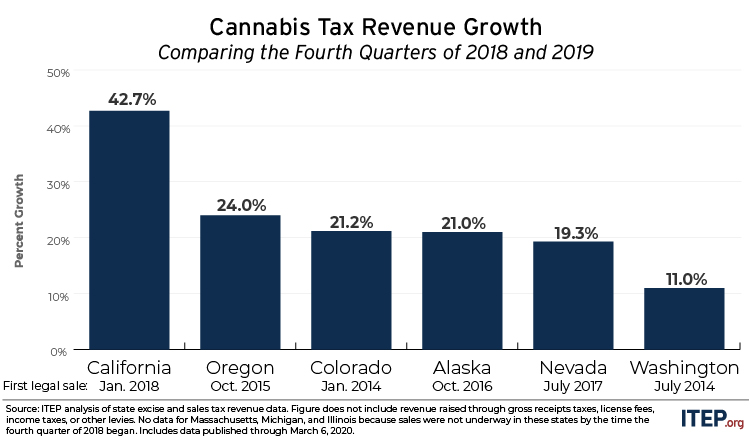 After California, the next most significant driver of nationwide revenue growth between 2018 and 2019 was the start of legal sales in Massachusetts, which began November 2018. As expected, revenue collections in Massachusetts started low but have grown quickly, and it appears that the state and its localities collected more than $89 million in excise and sales taxes on cannabis during 2019.

California raised more revenue than any other state last year, at $629 million. This amounts to nearly a third of the $1.9 billion raised nationwide. The West Coast, including California, Oregon, Washington, and Alaska, accounted for more than two-thirds of nationwide revenue, or $1.3 billion.

Of course, California’s large population makes it much easier for it to raise large amounts of revenue relative to other states. After adjusting for population, California’s cannabis tax collections ranked sixth last year, ahead of Massachusetts, the only state included in this analysis where legal sales began more recently than in California. California’s relatively low collections per capita are largely due to a slow licensing process for retail stores and lax enforcement against illegal stores, but the revenue growth exhibited in this analysis suggests that conditions are beginning to improve.

When ranked according to tax revenues per person, Washington State remains atop the pack, as is to be expected given its highest-in-the-nation cannabis tax rate of roughly 46 percent. 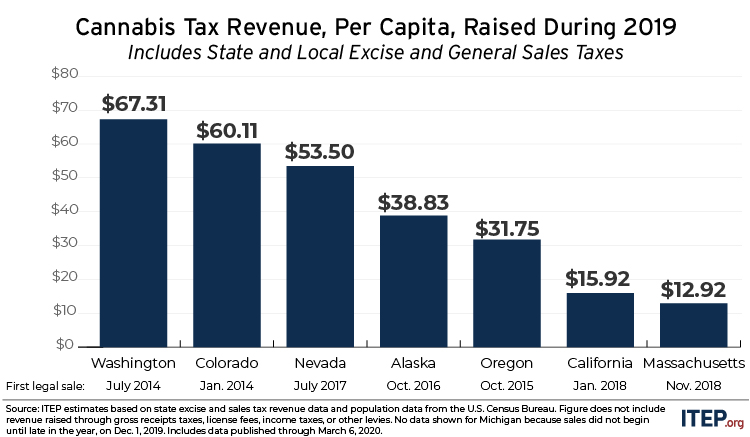 Looking ahead, excise and sales taxes on cannabis will undoubtedly surpass $2 billion in 2020 as sales come online in Illinois, Maine, and Michigan and as growth continues elsewhere. (In fact, the total tax contribution of the industry already exceeds $2 billion annually if gross receipts taxes, income taxes, license fees, and other levies are considered.) Illinois is on track to raise more than $100 million this year following a strong start to legal sales on Jan. 1. And growth is likely to continue in most other states with legal markets as well, particularly those with somewhat newer markets that do not yet have enough stores to meet demand, such as California and Massachusetts.

It’s also clear, however, that this rate of growth cannot be sustained forever. Eventually, the quantity of cannabis sold in the legal market will begin to stabilize. And in fact, there is reason for concern that revenue declines may be on the horizon in some states.

Most states with legal sales have chosen to tax cannabis based not on the amount sold, or weight, but rather based on price. This is a departure from how excise taxes are usually structured (e.g., flat taxes per pack of cigarettes, per gallon of liquor, or per gallon of motor fuel) and it leaves state revenue structures vulnerable to an inevitable drop in cannabis prices

Already, prices have been declining in states with legal sales as competition improves, businesses learn to operate more efficiently, and regulations are loosened. And additional declines are still to come, particularly if the federal government legalizes cannabis or loosens restrictions on the industry.

Alaska, California, and Maine are better positioned than the rest to withstand this price drop as they levy taxes based at least partly on the weight of cannabis. And other states, such as Connecticut and New York are considering following suit.

The advantages of weight-based taxes extend beyond simply shoring up tax revenue collections. Without a weight-based tax, for instance, price drops will trigger automatic tax cuts, thereby exacerbating any price decline. And since price-based taxes quickly lose their bite during times of falling prices, they are particularly ill-suited to discouraging youth consumption and overconsumption in general.

For now, cannabis tax revenue is trending upward in every state with a legal market. The short-run outlook is that this trend is likely to continue. But at some point, that trajectory will change, and it will do so in some states more than others.