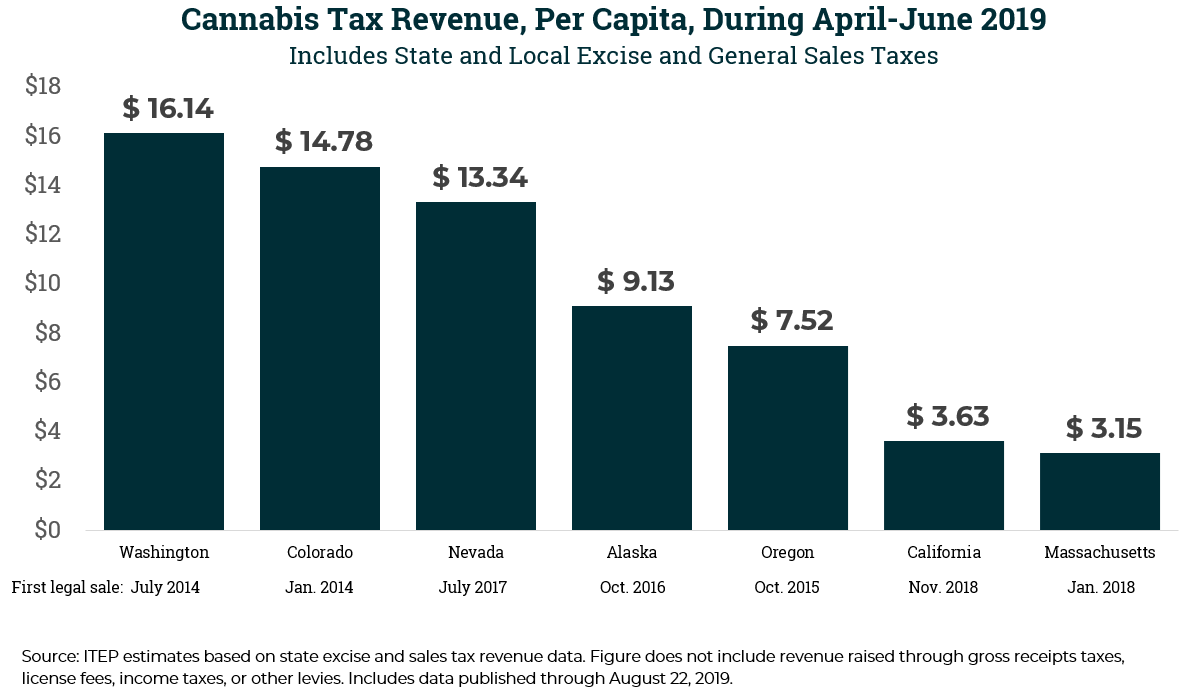 New tax data out of California, the world’s largest market for legal cannabis, tell a complicated story about the cannabis industry and its tax revenue potential. Legal cannabis markets take time to establish. And depending on local market conditions, the revenue states raise can vary significantly.

California illustrates these points dramatically. After adjusting for population, the Golden State raised the second-least amount of revenue from cannabis taxes during the second quarter among states with legal sales, ahead of only Massachusetts. This lackluster performance is partly due to the legal market’s short tenure (the second newest in the country, having launched in Jan. 2018) and partly due to policies that make it more difficult than average to open a legal cannabis store in California⁠—and easier than average to operate an illegal one. 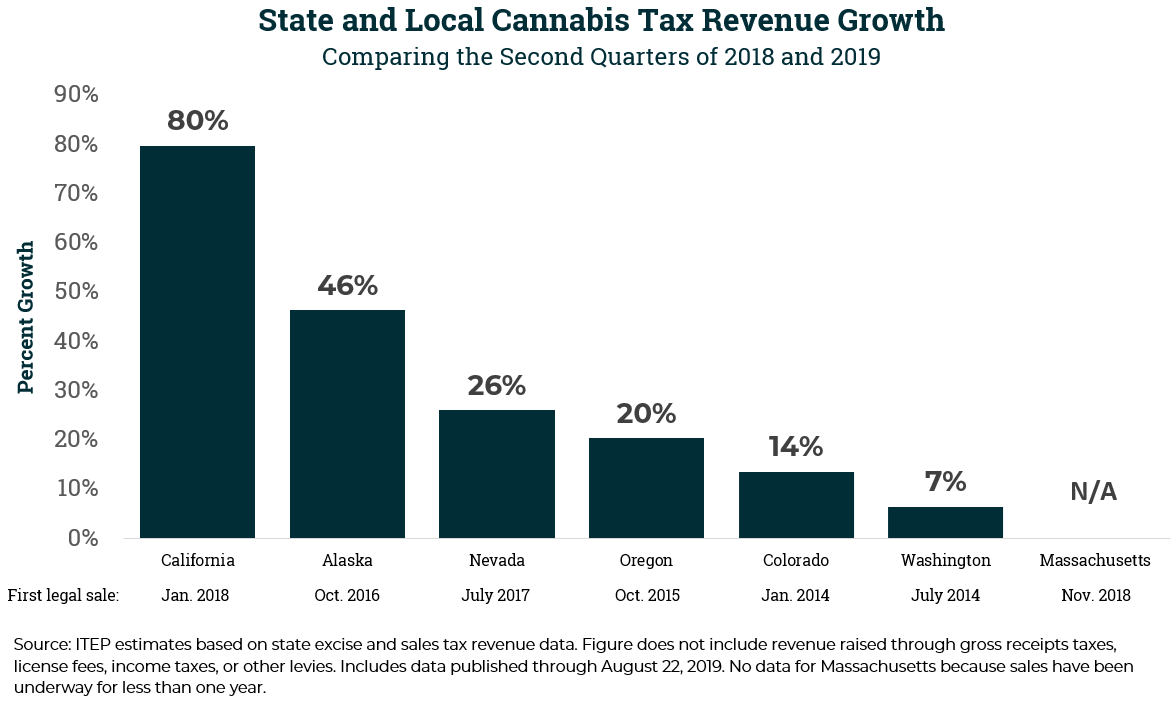 California’s legal recreational market has been in place for barely a year and a half, but as the largest state in the nation, many people are closely watching its experience with legalization. Already in its short history, the state’s underwhelming cannabis revenues have been described by some as a cautionary tale. Some industry advocates cite the state’s lackluster revenue yield as evidence that robust taxes on cannabis are causing droves of consumers to avoid legal stores in favor of the illicit market, where tax goes uncollected. Others in the industry have suggested that a lower rate would raise more revenue by facilitating an industry boom. It’s a familiar anti-tax refrain that doesn’t hold much sway in California except, it seems, when it comes to cannabis. But it’s one that should be viewed with skepticism.

If a high tax rate on cannabis were truly the most important barrier to the growth of California’s legal market and its associated tax revenue, then other states with higher tax rates would have similarly underwhelming legal markets. But the below chart shows that the most lucrative cannabis market in the country, from a tax revenue perspective, is in Washington State where the 46 percent tax rate (sales and excise) is at least as high, if not higher, than in California. (California’s average tax rate is difficult to calculate partly because of variation in local rates, but it appears to be below 46 percent.) 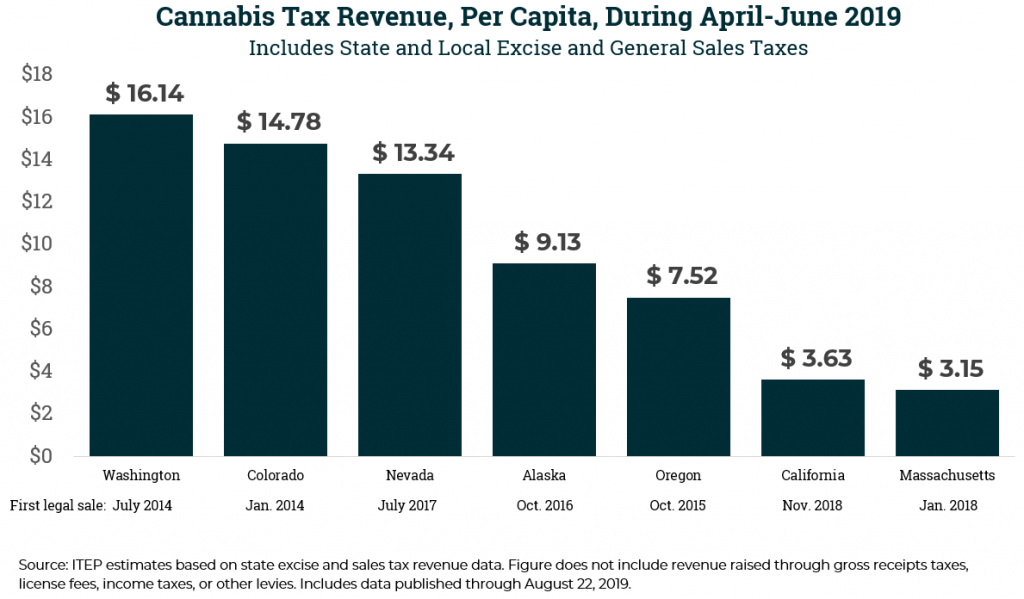 On a per-person basis, Washington State’s 46 percent tax is raising more than twice as much as Oregon’s 20 percent tax. This is what most people would intuitively expect: higher taxes generating more revenue, not less. The fact that higher taxes aren’t strangling Washington State’s revenue collections makes it difficult to pin the blame for California’s tepid legal cannabis market on its tax structure. If Washington State is successfully levying a high tax rate, then other states, including California, should be able to do so as well.

But if tax rates can’t explain California’s lackluster legal market, what can? At least four points about California’s market are worth considering:

Most discussions of California’s cannabis tax haul involve some mention of the possibility of raising $1 billion per year in tax revenue. By comparison, the roughly $350 million that California raised during its first 12 months of legal sales appears modest. But $1 billion was never a realistic estimate for the first year of legalization. In fact, when the California Legislative Analyst’s Office (LAO) released its official analysis of legalization prior to being approved by voters, it made clear that “tax revenues could reach $1 billion annually, but not right away.” LAO emphasized that “revenues are likely to be significantly lower in the first several years following the passage of the measure,” and that “it could be several years after the measure passes before revenues reach the range described above.” This prediction aligns with ITEP’s finding that cannabis revenues tend to start low but grow significantly through the first five years as the market matures.

Almost two years after voters approved legalization, the state’s Department of Finance issued a more ambitious revenue projection that ultimately proved too high. But other states have learned from California in the years that followed. In January, for instance, New York Gov. Andrew Cuomo’s budget office released a cautious projection of the revenue benefits of legalization and made clear that it wanted to avoid “falling in the trap of overestimating revenue from the adult-use of marijuana.”

To be sure, California’s revenue performance has been underwhelming. But it hasn’t been as underwhelming as a focus on the $1 billion mark might suggest.

For the legal market to thrive, and for cannabis taxes to reach their full potential, there needs to be a sufficient number of stores and those stores need to be in locations that are convenient for consumers. But bans on retail stores in most localities (69 percent of counties and 76 percent of cities) are making it difficult for many Californians to participate in the legal market. Even in locales that allow retail stores, a slow licensing process has suppressed the number of stores allowed to operate legally, at least for now.

The result is that California has fewer cannabis retailers (631) than Oregon (650) despite having a population nine times larger. This issue will improve with time. After all, Oregon’s legal market has a two-year head start on California’s.

But policy is also contributing to the license shortage. An analysis released last year, for example, found that after adjusting for population, California had roughly one-fifth the number of licensed stores that Colorado had at the same stage of legalization.

Despite the slow rollout in licensing, there appears to be plenty of interest among entrepreneurs in opening new stores. One cannabis consultancy reports that, because of the shortage of retail licenses, some licenses are being resold for an average of $3 million each in San Francisco and upwards of $5 million each in San Diego. Clearly, the buyers of these licenses think the legal market is in a strong position to grow and compete moving forward.

Also critical in California will be the spread of home delivery, especially into locales where retail outlets are banned. Home delivery will make the legal market a more convenient option for more consumers and which will expand its tax revenue yield.

Lawmakers considering cannabis legalization may have legitimate reasons to place restrictions on the opening of retail storefronts. But such restrictions inevitably require tradeoffs: namely, a smaller legal market, a larger illicit market and fewer tax dollars. We can see this playing out dramatically in California right now.

Throughout much of California’s experience with legal recreational cannabis, growers had to contend with uncertainty created by a system of temporary licenses that made it difficult to plan for the future, as there were no guarantees that they would have their licenses extended. This issue was only recently resolved through legislation, at least through 2022, and that temporary reprieve could bolster the state’s legal market in the years ahead. But legal growers continue to confront other obstacles not faced by their illicit competitors.

For instance, California places strict limits on the use of pesticide in cannabis grows. I’ve been told that the limits are so strict that some cannabis has failed lab testing not because it was sprayed with pesticide by the grower, but rather because some residual amount of pesticide sprayed by another farmer on an adjacent agricultural field happened to drift onto the cannabis plants. The science around the dangers of smoking cannabis containing pesticides is not well-established, and for now, California is erring on the side of caution with strict limits on pesticide content. That may ultimately prove to be the right approach from a public health perspective. Nobody really knows. But we do know that pesticide restrictions are keeping some product off the shelves and are likely increasing prices for the remaining products—downsides for the legal market among all but the most health-conscious consumers.

4. Lax enforcement against illicit businesses puts the legal market at a competitive disadvantage.

Selling cannabis on the illicit market remains a crime in California, though it’s one that the state has been reluctant to prosecute. As a result, illicit businesses have been operating in plain sight throughout the entirety of legalization, and many consumers may have no idea whether they’ve just walked into a licensed store or an illegal one.

The head of California’s Bureau of Cannabis Control conceded earlier this year that “as a state we have to get more aggressive” in enforcement against the illicit market. That shift in approach appears to be underway as raids on illegal businesses have tripled compared to last year. Previously, one of the main tools used by authorities in cities like Los Angeles was to shut off utilities at illegal businesses, rather than arrest the owners. But the efficacy of this lighter touch is questionable as evidenced by one councilmember’s speculation that “after we turn water and power off, these operators will bring in generators to keep operating.”

Eliminating the illicit market entirely is not a reasonable goal for California or any other state, but cracking down on its most flagrant violations of the law will shrink its size and steer more consumers into the legal, taxed market.

California’s legal market is off to a slower start than most, but the market and its tax contribution to the state and its localities are growing. More legal stores will open their doors in the years ahead and, if the current trend in enforcement continues, many illegal stores will be shuttered. Some problems with the state’s supply chain have already been addressed and unrealistic tax revenue expectations are starting to fade, replaced by a clear-eyed view of the industry’s revenue potential. It’s not surprising that some members of the cannabis industry are requesting tax cuts on the grounds that they would give the industry a leg up. But at this stage of legalization, it makes far more sense for authorities to focus on getting licenses into the hands of people who already want to operate legitimate cannabis businesses, and on closing down illegal stores that are flouting the laws governing California’s legal market.