State and Local Cannabis Tax Revenue on Pace for $1.6 Billion in 2019

Cannabis tax revenue is becoming more significant as legal sales grow. The tax is far from a budgetary panacea, but an ITEP analysis of revenue data reported by the seven states with legal cannabis sales underway suggests that excise and sales tax revenues from the sale of the drug could reach $1.6 billion this year. This would represent a 15 percent jump from the $1.3 billion these states collected in 2018 and would continue to rival the amount of state revenue raised from excise taxes on the sale of alcohol. 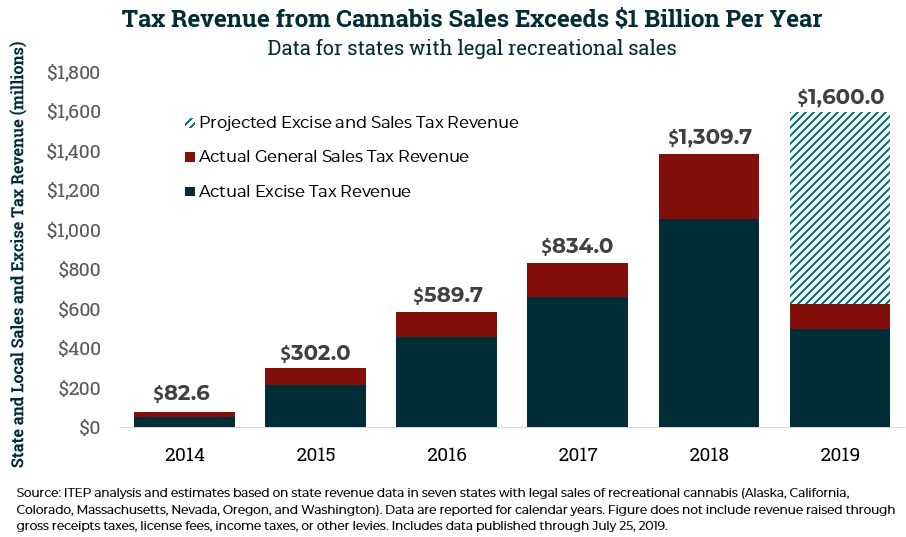 Recent growth has been fastest in states with emerging markets, which reaffirms ITEP’s finding from earlier this year regarding the trajectory of cannabis tax revenues in the early years of legalization. Most states, for instance, have seen revenue more than double from the first to the second year. But growth tends to slow as the market matures. This occurs partly because, with time, growth in quantity sold begins to slow and price cuts begin to create a drag on the yield of price-based cannabis taxes, which most states with legal markets currently levy.

In California, which started legal recreational cannabis sales in 2018 and whose lackluster cannabis revenue performance has received significant national attention, excise and sales tax revenue for January through March is up 91 percent relative to the same period last year. In Alaska, revenues for the most recent quarter with available data are up 49 percent. These states are followed by Nevada with 25 percent growth, Oregon at 20 percent, Colorado at 14 percent, and Washington State at 6 percent. 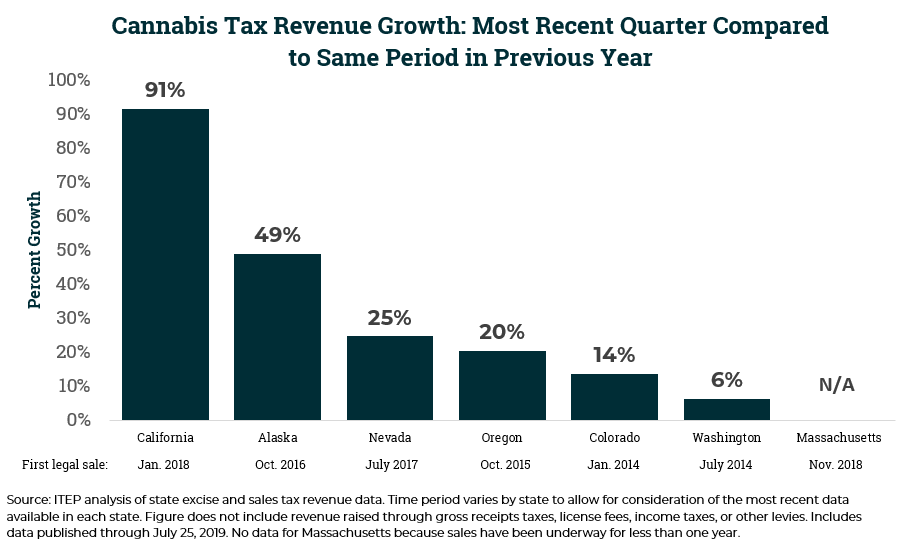 Notably, the two fastest-growing states by this measure (California and Alaska) both levy taxes based on the weight of cannabis sold. This structure will generate more significant revenue over time because its yield will not be undercut by expected declines in the price of cannabis. For the time periods examined here, however, California and Alaska’s above average growth likely has more to do with the fact that their markets are significantly newer than in most legal states and are therefore still in the early, typically more rapid, stages of growth.

At the other end of the growth spectrum are Colorado and Washington, the first two states to allow for legal sales. Sales in these states began in 2014 and, given the comparative longevity of these states’ systems, much more of the ramp up in consumption has already taken place.

Looking ahead, as growth in quantity sold begins to slow in states with older markets, the fate of cannabis tax revenue will become increasingly intertwined with trends in cannabis prices (both Colorado and Washington tax exclusively based on the price of cannabis sold). This is likely to spell trouble in the long run as there is compelling evidence to suggest that prices will continue declining in years ahead as competition improves and as state and federal regulations are loosened. As that occurs, consumers in these states will receive hefty, automatic tax cuts on each ounce of cannabis purchased and state and local revenues will suffer as a result.