Lawmakers in about a dozen states are giving serious consideration to either cutting or eliminating their state personal income taxes. In each case, these proposals are being touted as a way to boost economic growth.

One claim often made during these debates is that the nine states without personal income taxes are outperforming the rest of the country, and that their growth can be easily replicated in any state that dares to abandon its income tax. Some have also claimed that the nine states with the highest top income tax rates are experiencing below-average growth. The governors of Indiana, Oklahoma, and South Carolina, as well as high-ranking officials pushing for income tax repeal in Louisiana and North Carolina, are just some of the more influential lawmakers that have attempted to frame the debate in this way.

But these talking points, which have been widely disseminated by the American Legislative Exchange Council (ALEC), Americans for Prosperity, and The Wall Street Journal’s editorial board, are based on an analysis by supply-side economist Arthur Laffer that is extremely flawed. That analysis was first debunked by ITEP in early 2012. In its rebuttal, ITEP explained why Laffer’s simplistic state-by-state comparisons cannot reliably tease out the impact of tax policy on state economies. But ITEP also showed that even if one were to accept Laffer’s methodology as somehow valid, his core finding is simply not true. In reality, the residents of the states that levy income taxes—including residents of those states with the highest top tax rates—are experiencing economic conditions at least as good, if not better, than those living in states lacking a personal income tax. Only by focusing on blunt aggregate measures of economic growth was Laffer able to purport to show the opposite.

This report updates ITEP’s 2012 findings in light of new available data and explains in more detail the problems with Laffer’s analysis. 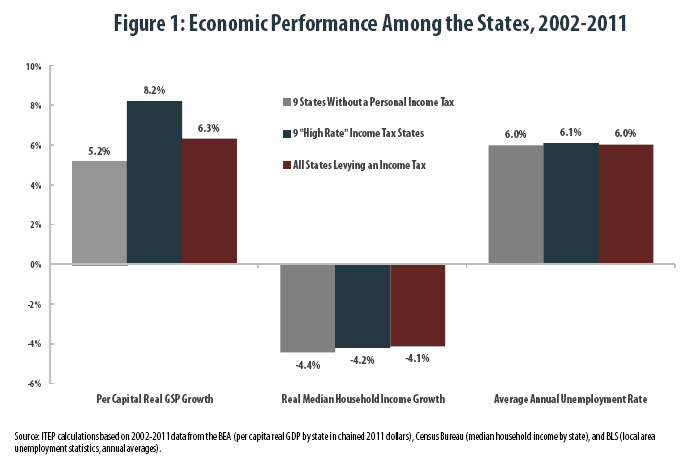