Tax Credits in Build Back Better Support Millions of Families

Millions of people across the nation are better off financially thanks to temporary Earned Income Tax Credit (EITC) and Child Tax Credit (CTC) expansions included in the March 2021 American Rescue Plan. Congress can ensure families continue to have the resources they need to thrive by passing the Build Back Better bill, which extends these tax credit improvements through next year.

The benefits of EITC and CTC expansion are widely distributed among households of different races and ethnicities.

CTC + EITC by the Numbers 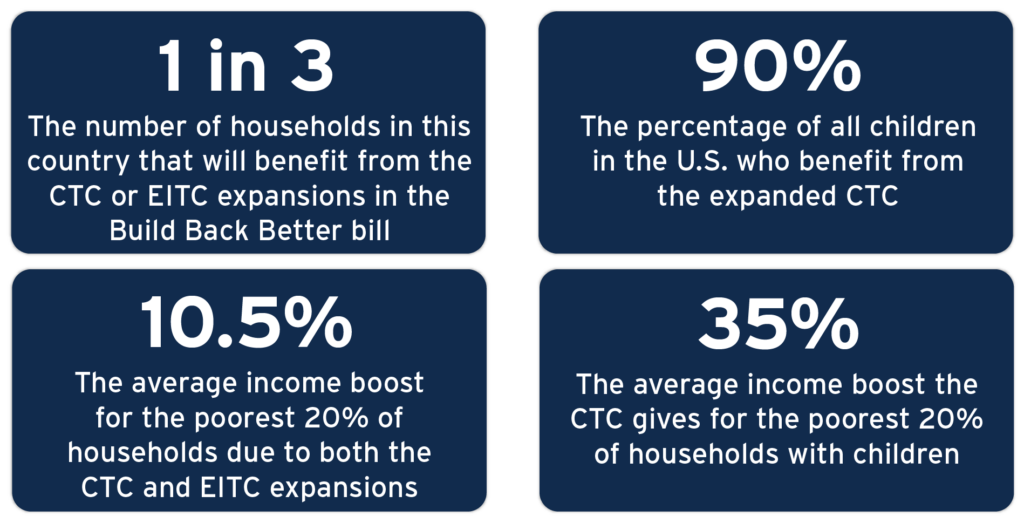 Congress must pass Build Back Better to help improve economic and racial equity.

Before the pandemic, four in 10 families struggled to make ends meet as the nation reckoned with 40 years of trickle-down economic policies that funneled a greater share of the nation’s wealth to the top. Build Back Better would begin to address this injustice, which has disproportionately affected Black and brown people due to other inequities.

The EITC and CTC are proven poverty-fighting tools. The monthly CTC payments alone kept 3.6 million people out of poverty in October. This policy success is worth repeating.