Before Wednesday, you may have forgotten about tax reform given that President Trump’s remarks on the Charlottesville white supremacist rally, as well as the first U.S. solar eclipse since 1979, and Hurricane Harvey, overshadowed most other news. But Republicans on the House Ways and Means Committee, which in theory is the starting place for any tax legislation, certainly tried to get the public to focus on their vision for tax reform. They released a “reason for tax reform” each day in August. Unfortunately, these “reasons” are a combination of ideas that their proposals fail to address and misleading assertions. Here’s a sample.

Claims that cutting rates, reducing brackets and other breaks will help all Americans.

“Americans at every income level deserve to keep more of their paychecks.”

“Our broken tax code has too many brackets.”

The proposals Republicans have discussed, which include fewer income tax brackets, lower rates and other types of breaks, would allow the rich to keep more of their income and offer negligible tax cuts to everyone else. In some cases, these proposals would result in higher taxes on middle-income families.

Proponents of these tax cuts argue that the benefits will “trickle down” to lower income households because lower taxes will result in increased investment and job creation. But previous tax cuts aimed at the rich failed to expand our economy while tax hikes on the rich have often been followed by increased economic growth.

Claims that American Corporations Pay Too Much in Taxes

Republicans have long claimed that the statutory 35 percent federal corporate income tax rate is too high. But most American corporations pay far less than this because of various loopholes and special breaks. 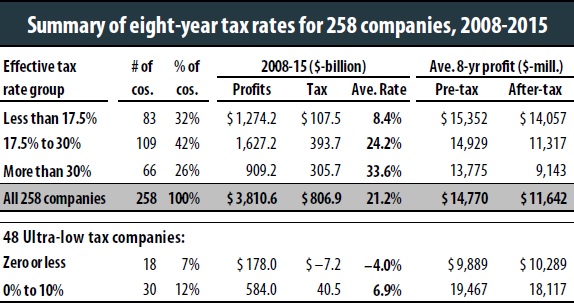 Nor is there any evidence that American corporations are taxed more than those of other advanced economies. The latest data from the OECD show that the total amount of corporate income tax revenue collected by the federal government is equal to 2.2 percent of economic output in the United States compared to an average 2.9 percent in other OECD countries.

Claims that the U.S. and Its Businesses Are Not Competitive

“Our broken tax code is a drag on our economy.”

Corporate profits in the United States are higher as a share of the economy than they have ever been. Large, multinational corporations in particular do not need new breaks but

Republican proposals would give them advantages over small businesses. The territorial tax system proposed by the Trump Administration would exempt offshore profits of American corporations from U.S. taxes. This would increase the already substantial rewards that multinational corporations can obtain when they use accounting gimmicks to make their profits appear to be earned in a foreign country with low or no corporate tax. These gimmicks are not available to the small businesses that most Americans associate with “Main Street.”

Far from simplifying business taxes, Republicans have offered several proposals that would make taxes vastly more complex for businesses and would cause their owners to make even more decisions based on arcane tax rules rather than sound economics.

For businesses that are “pass-throughs,” meaning their profits are subject to the personal income tax but not the corporate income tax, the Trump Administration has proposed a 15-percent tax rate. This would cause enormous complexity as highly paid employees would likely attempt to form their own pass-through companies to benefit from the 15-percent rate. Congress or the IRS would have to create a lot of rules (and long forms) to prevent this form of tax avoidance.

Even if they succeed, this proposal would do nothing to help middle-income business owners, most of whom already pay a rate lower than 15 percent. ITEP estimated that 79 percent of the benefits of this break would go to the richest 1 percent of taxpayers.

As for large multinational corporations, the Trump Administration has proposed a “territorial tax system” that would also make taxes far more complex. There are already rules determining which corporate profits are considered domestic versus foreign, and, despite the arcane detail of these rules, they are already failing to prevent companies from shifting profits into offshore tax havens. This problem will grow far worse under a territorial system, which exempts the offshore profits of American companies from U.S. taxes, providing even bigger benefits for companies that use accounting schemes to make their profits appear to be earned in offshore tax havens.

Corporations move operations from one country to another for all sorts of reasons, and it’s not clear that taxes play much of a role. What is clear is that our tax system has a loophole allowing American corporations to use mergers to characterize themselves as foreign companies for tax purposes even though their ownership has not changed and they continue to be managed in the United States. Republican leaders in Congress have blocked legislation that would close the loophole allowing these so-called “inversions.”

The biggest problem with our corporate tax system is that it allows corporations to use accounting gimmicks to make their U.S. profits appear to be earned in countries where they won’t be taxed. Congressional Republicans are correct to point out this problematic “profit shifting,” but unfortunately their proposals will only make the problem worse.

Their proposal to implement a “territorial tax system,” which was included in President Trump’s proposals in April, would exempt the profits that corporations characterize as having been earned outside the U.S. This means that offshore profit shifting by corporations would reap even greater savings than it does now.