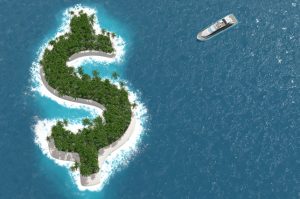 With the failure of legislation to repeal the Affordable Care Act, the Trump administration and Republicans lawmakers are moving on to corporate tax reform. At the heart of this debate is the problem of corporations shifting their profits to foreign tax havens to avoid U.S. income taxes. A new report by the Institute on Taxation and Economic Policy (ITEP) helps clarify the scope of this problem, finding that Fortune 500 corporations now disclose more than $2.6 trillion in offshore earnings on which these companies have avoided as much as $767 billion of income tax.

The reason for this exodus of offshore cash is that the corporate tax code allows companies to avoid paying even a dime of U.S. taxes on their offshore earnings, which often includes domestic earnings moved offshore, until they officially repatriate these profits. This policy, known as deferral creates a huge incentive for companies to simply hold their money offshore indefinitely because it allows them to avoid paying taxes to the United States.

ITEP’s new report shows that offshoring profits is a widespread phenomenon: 322 Fortune 500 companies now report having some offshore earnings. But the data also show that the bulk of these earnings are held by a relatively small number of companies. In fact, just 10 companies, including Apple, Pfizer, Microsoft and General Electric, alone hold $1 trillion of the $2.6 trillion hoard.

Fifty-nine of the offshoring companies disclose, in their annual financial reports, how much federal income tax they’re avoiding by keeping their profits offshore. The unpaid tax rate for these 59 corporations averages 28.7 percent. Since the federal tax bill on repatriation is 35 percent minus any foreign tax already paid, this implies that these companies have paid an average tax rate of just 6.3 percent on these profits so far. This is a clear indication that much of this income is being reported in low-rate foreign tax havens like Bermuda and the Cayman Islands. If the other offshoring companies faced the same tax rate on repatriation, then these companies would owe an estimated $767 billion in unpaid taxes on their offshore earnings.

Rather than seeking to collect this $767 billion in unpaid taxes, many lawmakers on both sides of the aisle appear more interested in giving companies a tax break. In lieu of tackling corporate tax reform head-on by repealing unwarranted tax loopholes, some policymakers have noticed that even a small tax on offshore cash could bring in enough revenue to pay for infrastructure and/or lower corporate tax rates, at least in the short run. For his part, President Donald Trump has proposed a mandatory tax of 10 percent on offshore earnings. While he has pitched the idea as a revenue generator, the reality is that applying a 10 percent rate would represent a 70 percent tax break compared to the 35 percent rate that the law requires. Overall, this would mean that President Trump’s tax plan would give companies a tax break of over half a trillion dollars compared to the $767 billion that they owe.

President Trump is certainly not alone in proposing irresponsible repatriation proposals. Lawmakers and advocacy groups on both sides of the aisle have put out a variety of proposals to tax offshore earnings at rates even lower than 10 percent. The House Republican leadership’s plan would tax these earnings at rates of 8.75 percent for liquid assets and 3.5 percent for all other offshore earnings. Bipartisan legislation proposed during the last Congress would have allowed companies to voluntarily repatriate their earnings at a rate of 6.5 percent, though this effort ran into trouble when the non-partisan Joint Committee on Taxation (JCT) found that the legislation would lose $118 billion in revenue. More recently, Rep. John Delaney proposed a pair of bipartisan bills that would allow companies to repatriate their earnings at a zero percent or 8.75 percent to pay for infrastructure spending. These bills are striking for their support by a number of Democrats, despite the fact that they are proposing a tax break larger than the one offered by President Trump.

The one bill that stands in sharp contrast to others is the Corporate Tax Dodger Prevention Act proposed in early March by Sens. Bernie Sanders and Brian Schatz and Rep. Jan Schakowsky. This bill would require companies to pay the full 35 percent rate they owe (minus foreign tax credits) on their offshore earnings. Even better, the bill would permanently close the deferral loophole, which would effectively shut down offshore tax avoidance once and for all. This approach would not only make the tax system more fair, it would also raise a substantial amount of revenue that could be used for public investments.