The Bottom 40 Percent Has Grown Poorer, So Why Are Tax Cut Plans Focused on the Rich and Corporations? 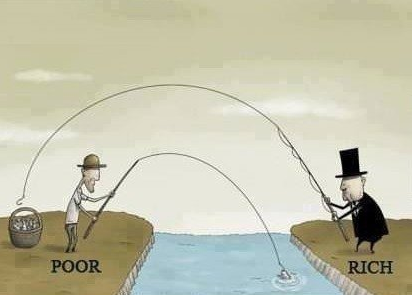 For the better part of this year, the White House and Republican leaders have been touting tax cuts that they claim would benefit the middle class. Yet every framework and proposal they have released reserves the greatest share of benefits for the wealthy and corporations, who don’t need it.

Essentially, our elected officials have crafted legislative solutions for a problem that doesn’t exist. In so doing, they could exacerbate a legitimate national problem—increasing income inequality.

Data on poverty and income released earlier this year by the U.S. Census Bureau provide a clearer picture of both sides of the coin.

In 2016, median household income (adjusted for inflation) marginally exceeded the peak it reached in 1999 ($59,039 in 2016 v. $58,665 in 1999). More specifically, median household income continually declined after 1999, began to recover and finally, after 17 years, exceeded its previous peak by about a bit more than half a percent.  Unfortunately, a closer look at the data reveals that while median income (half of households earned less, half earned more) finally recovered, a large share of families below that level moved backward.

The story has been quite different for the nation’s highest-income households, however. The richest 5 percent took home annual incomes averaging $375,088 in 2016, a 9.3 percent increase from their average income of $338,872 in 1999. Similarly, the top 20 percent of households had a nearly 10 percent gain in income.

In sum, the highest-income households are reaping most of the benefits of economic growth, the nation’s middle class is hollowing out and the divide between rich and poor continues to grow.  None of this is breaking news. Scholars have been writing about income inequality for years, and the nation’s news pages dedicated many column inches to the issue during and after the 2007-2009 economic recession, which made painfully clear what had been true for a very long time: A large percentage of the nation’s families don’t have three months or more of savings to endure a job loss or other economic hardship, and far too many of them don’t have $400 saved to deal with comparably minor crises such as a car repair.

It’s impossible to fathom how tax cuts that mostly benefit the rich would rectify this very real social problem.

Instead of focusing on the nation’s real challenges, anti-tax advocates and their allies in the White House and on Capitol Hill are determined to resuscitate supply-side economic theories. The House is currently negotiating a tax overhaul that would give the greatest share of tax cuts (62 percent) to the top 5 percent of Americans. The top 1 percent alone would receive 48 percent of the cut based on the current draft of the plan. The Senate plan not only gives the biggest share to the wealthy, it also would repeal the individual mandate in Obamacare. In other words, it gives away the store to the rich and takes away health care from up to 13 million people to pay for it.

Furthermore, ITEP’s analyses find that under both plans, some taxpayers would face tax increases, and those taxpayers are concentrated among the middle- and upper-middle-income segments of the population. Boosting the after-tax incomes of the richest Americans while capturing more income from middle-income families is a textbook prescription for widening the economic divide, not improving the lot of working people.

Yet anti-tax proponents are doggedly staying on message and focusing on the House and Senate plans’ alleged tax cuts for middle income families. [Read ITEP’s statements on this farce here, here and here.] For example, the White House Council of Economic Advisors recently doubled down on trickle down economic theories by issuing an official document with farcical claims that corporate tax cuts would lead to a $4,000 to $9,000 boost in income for average Americans.  No serious economist backs this absurd assertion.

The bottom line is that the rich and corporations are doing more than fine, they are flourishing. The nation doesn’t need legislative solutions that fix non-existent problems. Only in a world of alternative facts do the wealthiest 0.2 percent of families need to be exempt from the estate tax.

If lawmakers truly care about the economic well-being of middle-class families or the working poor who have fared worst over the last two decades, there are policies they could pursue such as increasing the federal minimum wage, which has remained stuck at $7.25 since 2009. Also, the Economic Policy Institute has produced a cornucopia of research on boosting workers’ pay. It’s not surprising that tax cuts for corporations and the wealthy are not among its policy recommendations.