The most recent data from the Organization for Economic Cooperation and Development (OECD) show that the United States is one of the least taxed of the developed nations.

The 35 OECD nations include most developed nations and the primary countries with which the United States trades and competes. According to the most recent data from the OECD, total tax revenue in the United States equaled 26 percent of gross domestic product (GDP) in 2016, which is another way of saying 26 percent of the nation’s economic output that year.

Only Mexico, Chile, Ireland and Turkey collected less in taxes as a percent of GDP. Other OECD countries collect tax revenue equal to 34.2 percent of their GDP, on average. In fact, the United States could raise total collected tax revenue by 30 percent and remain below the OECD average.

The Trump Administration and members of Congress recently enacted the Tax Cuts and Jobs Act (TCJA) based on the premise that U.S. taxes were too high and that the path to economic prosperity is tax cuts. But most nations as economically developed as the U.S. collect far more in taxes, including countries with very successful economies. In reality, multiple factors beyond statutory tax rates contribute to a successful economy, including an educated, robust workforce, a strong education system, a healthy population and sound infrastructure. 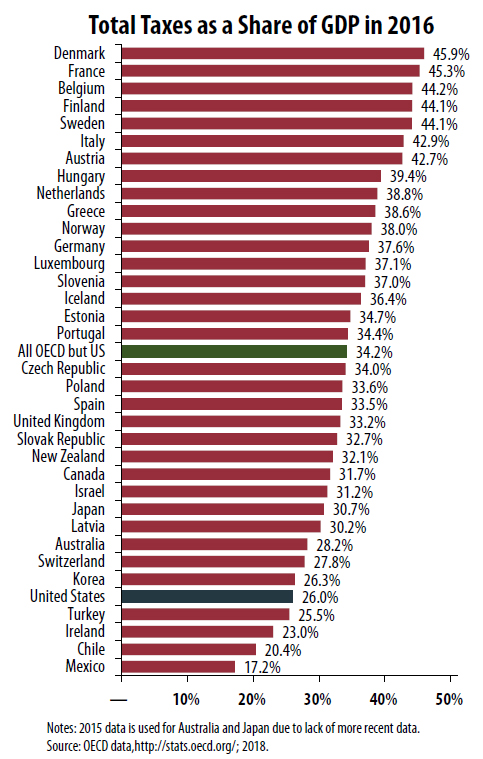