Trump (Sort of) Used Our Data on Corporate Tax Avoidance, But He Missed the Point 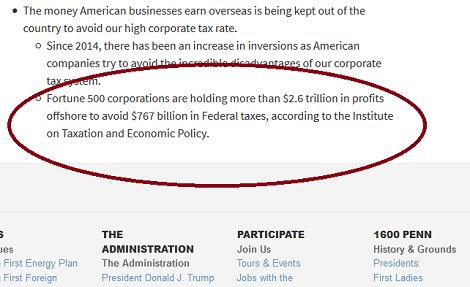 On Wednesday, reporters waiting to write about President Trump’s much-ballyhooed tax reform speech in Missouri received a fact sheet from the White House informing them that, “Fortune 500 corporations are holding more than $2.6 trillion in profits offshore to avoid $767 billion in Federal taxes, according to the Institute on Taxation and Economic Policy.”

Minutes later, Trump flatly contradicted the fact sheet that his staff had prepared, claiming corporations have “anywhere from $3 to $5 trillion” offshore. Unfortunately, the president appears to have misunderstood both the size of this offshore stash and what this problem means for tax reform.

It’s not difficult to quantify the size of our offshore cash problem: the SEC requires publicly traded companies to disclose this cash and whether they have paid taxes on it in their annual financial reports. Every year, ITEP releases a report tabulating these data. The most recent edition pegged the total amount of offshore cash at $2.6 trillion. We also found, as the White House release helpfully explains, that companies are holding this cash offshore to “avoid $767 billion in Federal taxes.”

The reason we’re able to estimate that companies have avoided so much U.S. tax on their offshore cash is that these companies routinely disclose having paid virtually no taxes to foreign governments on these profits. Apple and Microsoft, which collectively hold $350 billion offshore, admit having paid a tax rate of less than 4 percent on these profits. This almost certainly means these monies have been artificially shifted into foreign tax havens—countries with no real economic activity and no taxes on corporate profits. In other words, the White House is correct in its assessment that this offshore cash was, in many cases, put there for the sole purpose of, “avoid[ing]… taxes.”

As if $2.6 trillion offshore, a record haul, isn’t egregious enough, Trump continues to casually double the $2.6 trillion estimate and utterly miss the point of the $767 billion in unpaid taxes. The White House and its anti-tax political and advocacy allies would have us believe that corporations are forced to stash their money offshore because U.S. taxes are too onerous.Having caught companies with their hands in the cookie jar, the Trump Administration would deal with this by giving them a lollipop.

Firms that have intentionally shifted profits offshore to avoid taxes should be required to pay them, just like many smaller, purely domestic businesses that already comply with our tax laws. The Trump administration proposes instead to give these companies a special “tax holiday,” a 10 percent tax rate on any offshore cash the companies choose to bring back to the United States. At a time when our tax system should create a level playing field, the Trump plan would further tilt it in favor of big multinationals and against small businesses.

Facts matter. And on the topic of offshore cash, facts are easy to find. We know that Fortune 500 corporations have shifted more than $2.6 trillion of their profits offshore, often into tax havens such as Bermuda and the Cayman Islands, and we know that many of them have done so for the sole purpose of avoiding all income taxes. But by casually doubling the best estimate of the size of this offshore cache, and then misunderstanding the best remedy for the problem, the Trump administration does nothing to advance the cause of real tax reform.