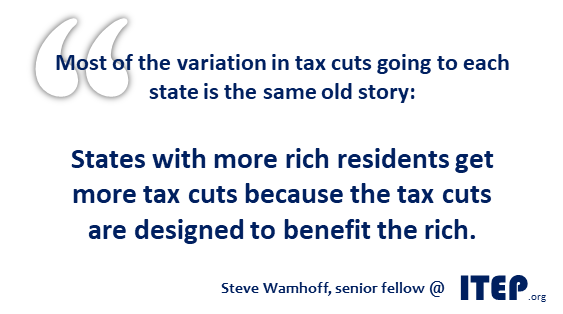 In a wide-ranging interview with the Wall Street Journal published Tuesday, President Trump said his tax plan would give middle-class taxpayers a break and may even raise taxes on the wealthy.

A recent ITEP analysis of the tax reform principles that the Trump Administration released in the spring, however, belies this assertion. Unless the administration takes a radically different direction on tax reform from what it has already proposed, its tax plan would be a monumental giveaway to the top 1 percent. The wealthiest one percent of households would receive 61 percent of all the Trump tax breaks, and would receive an average of $145,400 in 2018 alone. 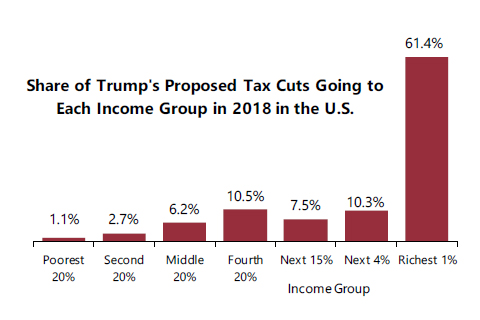 This massive tax giveaway to the wealthy would have consequences. Already, the administration has signaled its intent to curtail spending on a wide range of domestic programs. Everything from subsidies to pay for education, food assistance, health care and disability insurance are slated for severe cuts under the Trump budget plan. Without severe cuts in programs and services, the Trump tax plan would add at least $4.8 trillion to the national debt over a decade. 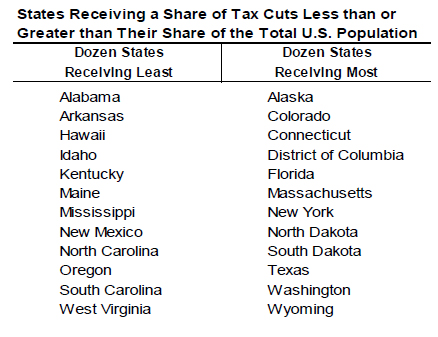 During his Wall Street Journal Interview, Trump said, “The people I care most about are the middle-income people in this country, who have gotten screwed.”

But this rhetoric simply doesn’t comport with his proposed tax principles or his proposed budget cuts. In fact, many of the states where the president has the greatest support overall would receive a smaller relative share of his tax cuts.

ITEP’s analysis revealed that of the dozen states that would receive the smallest share of tax cuts relative to their population, seven are in the South (Alabama, Arkansas, Kentucky, Mississippi, North Carolina, South Carolina, and West Virginia). The other states among that unfortunate dozen are New Mexico, Oregon, Maine, Idaho and Hawaii.

There has been much speculation that one aspect of Trump’s proposals (his apparent desire to repeal the deduction for state and local taxes, among other deductions) would hurt Democratic states that have high taxes. Under almost any interpretation of Trump’s proposals, taxpayers would no longer be allowed to deduct state and local taxes when calculating their taxable income on their federal tax form.

But most of the variation between states is the same old story: States with more rich residents get more tax cuts because the tax cuts are designed to benefit the rich. In nearly every state, the majority of the tax cuts would go to the richest 5 percent or even richest 1 percent of the state’s residents.

Regardless of what state you live in, the Trump tax proposals were not created to benefit you unless you are really well-off. In fact, low- and middle-income people would inevitably face a net loss after cuts to health care, education, nutrition and other public investments that would inevitably follow.