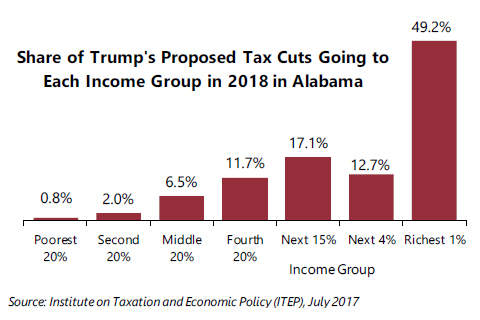 Earlier this year, the Trump administration released some broadly outlined proposals to overhaul the federal tax code. Households in Alabama would not benefit equally from these proposals. The richest one percent of the state’s taxpayers are projected to make an average income of $1,393,900 in 2018. They would receive 49.2 percent of the tax cuts that go to Alabama’s residents and would enjoy an average cut of $83,090 in 2018 alone.

Officials in the Trump administration have said that their tax plan will help the middle-class, but that is not true of the proposals they have put forward so far. For example, in Alabama, the middle fifth of taxpayers in terms of income are projected to make an average income of $46,500 in 2018. This group would receive just 6.5 percent of the tax cuts next year in Alabama compared to the 49.2 of the tax cuts received by the richest one percent of the state’s residents.

Bottom 60 Percent of Taxpayers in Alabama Would Receive Just 9.3 Percent of the Tax Cuts in the State

The bottom three-fifths of taxpayers (the lowest-income 60 percent of taxpayers) in Alabama will all make less than $57,900 in 2018. They would gain very little, just 9.3 percent of the tax cuts that go to residents in the state. The average tax cut for this group next year would be $270, which is tiny compared to the average $83,090 going to the richest one percent.

Price Tag of Plan Would Mean Cuts in Public Investment that Working People Rely On
Trump’s tax proposals would reduce total federal revenue by at least $4.8 trillion over ten years. In the short-run this might just mean higher government deficits, but eventually Congress and the President would almost surely have to cut major programs like Medicare, Medicaid, food assistance and others to
offset the costs. Low- and middle-income families would probably lose far more as a result than they gain from the small tax cuts President Trump would provide them.

Tax Cuts Can Be Measured in Several Ways, But This Plan Favors the Rich Under Any Measure
Politicians who propose tax cuts sometimes argue that no one should be surprised if they mostly benefit the rich. They argue that the rich make most of the income, so of course they receive most of the tax cuts.

Tax Proposals Included in These Figures
These are described in more detail in ITEP’s longer report on the Trump tax proposals.