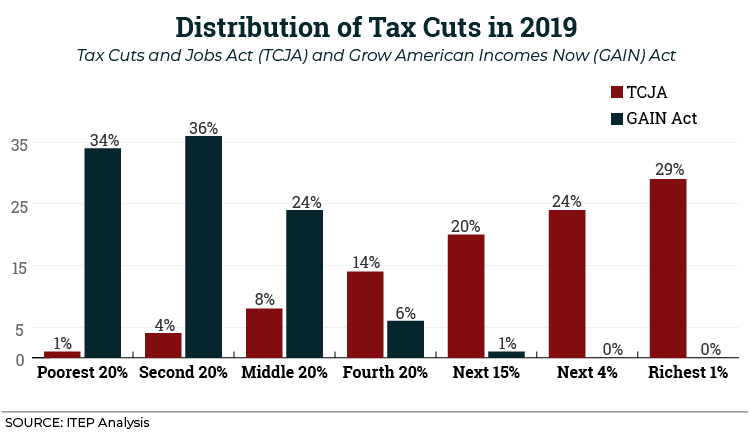 Throughout President’s Trump’s presidential campaign and from his first day in office until now, his administration has favored and promoted policies that benefit the wealthy and corporations even as it claims to be working people’s champion.

The administration touts hand-picked economic indicators, including a lower unemployment rate, as evidence of its success at helping the “middle-class.” Yet a closer look at economic data reveals that policies under this administration exacerbate a long-standing trend in which the wealthiest reap most of the benefit of economic growth. Corporate profits and stock buybacks have grown substantially since the Tax Cuts and Jobs Act passed, for example, but the real median wage for workers declined slightly during the same period.

Census data on poverty and income released today reveal that for the third consecutive year, the national poverty rate declined (the national poverty rate in 2017 was 12.3 percent v. 12.7 percent in 2016). Median income budged slightly from 60,309 to 61,372, but the top 20 percent continued to capture 51.5 percent of the nation’s income, and income for the poorest 20 percent is still lower today than it was in 1999.

If recent economic data are a reflection of what we’ll see in the long-term due to the Trump Administration’s recent tax cuts, wealth will continue to accrue at the top while income remains stagnant for low- and moderate-income families.

The Trump Administration and GOP leadership touted the Tax Cuts and Jobs Act as a measure intended to help middle-class families even though it included provisions precisely designed to boost after-tax income for the wealthy (it dramatically cut the corporate tax rate, decimated the estate tax, lowered the top marginal rate, and lowered the business pass-through rate). The few provisions that targeted working families weren’t ambitious enough to make a noticeable difference for most working people.

In contrast, the Grow American Incomes Now (GAIN) Act, introduced by Sen. Sherrod Brown and Rep. Ro Khanna in 2017 is tax reform that would measurably raise the incomes of low-income and middle-class families.

The GAIN Act proposes substantial enhancements to the Earned Income Tax Credit (EITC), the nation’s most potent anti-poverty tool. It would double the maximum credit for working families and increase it by nearly sixfold for workers without children in the home. For example, the maximum credit for a family with two children would go from $5,616 to $10,783. For workers without children, the maximum credit would grow from $510 to $3,000. The bill would also make the EITC available to more workers by extending eligibility to middle-income families earning as much as $76,000 a year and lowering the minimum eligibility age to receive the EITC from 25 to 21.

According to ITEP’s analysis, the GAIN Act would raise the incomes of 52.5 million households who would receive an average tax cut of $2,892.

The Census’s Supplemental Poverty Measure quantifies how tax credits can reduce poverty. The data show that the federal EITC and the refundable portion of the Child Tax Credit together lifted 8.3 million people out of poverty and decreased the supplemental poverty rate by 2.6 percent. The GAIN Act’s EITC expansion would lift millions more out of poverty and lower the poverty rate even further. 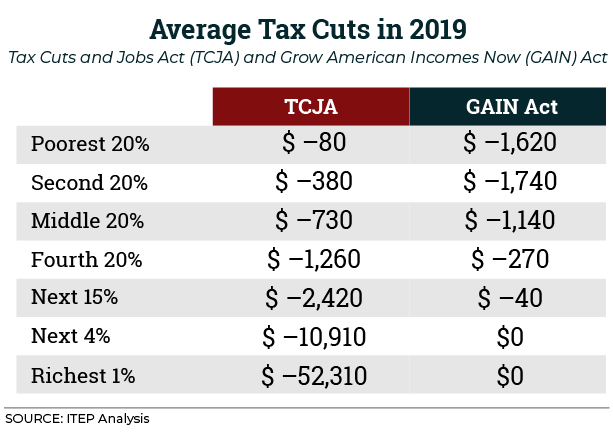 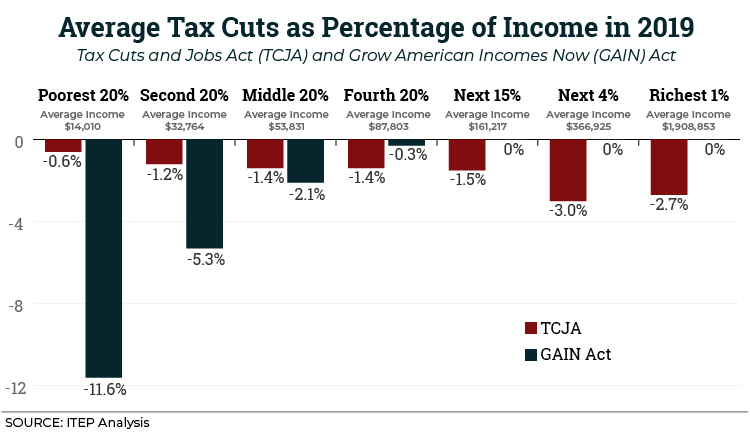 Our nation’s policymakers had a choice when it came to how to use our tax code to benefit workers and their families. Instead of passing a tax cut package that mostly benefited the rich and justifying it with old hat rhetoric about the rich “receiving bigger tax cuts because they pay more,” they could have laser targeted working families and delivered a meaningful boost to their incomes at a smaller cost than the TCJA.

Poverty and income data released today paint a complex picture of income and wealth but don’t tell a complete story about the impact of the recent tax law (it likely will take a few years before we know its true impact). But if we look at what has happened to the economic status of families over time, we know that income has been concentrating at the top. Tax cuts that shower the majority of their benefit on the rich and corporations are not likely to reverse that trend.