Which States Benefit from the Tax Cuts in the GOP Health Plan?

Congressional Republicans’ plans to repeal the two largest tax increases on individuals that were enacted as part of the Affordable Care Act (ACA) would disproportionately benefit residents of Connecticut, New York, the District of Columbia and 10 other states. The remaining states would receive a share of the tax cuts that is less than their share of the total U.S. population.

The two largest ACA tax provisions that would be repealed for individuals are the increase in the Medicare tax on wages to 3.8 percent for high-earners and the similar 3.8 percent tax on investment income for high-income households. Before the ACA, the Medicare tax had a uniform flat rate on wages regardless of income level, and investment income, which disproportionately flows to the wealthiest households, was exempt from the tax. Each version of Republican legislation to repeal the ACA has abolished these provisions, though they differed on when repeal would take effect.

As of this writing, GOP lawmakers are debating how long to allow these taxes to remain in effect, but interest groups that have sway with the party are determined to ensure that the taxes are repealed.

The map below compares the share of benefits from these tax cuts each state would have received if the Republican proposal had been in effect in 2016 with the Census Bureau’s estimate of the states’ share of the U.S. population in 2016.

ITEP estimated the total benefits from these two tax cuts in March. That analysis concluded that repeal of the increase in the Medicare wage tax would reduce revenue by more than $8 billion if in effect in 2016, while repeal of the 3.8 percent tax on investment income would reduce revenue by $23 billion that year, for a combined total of $31.5 billion in tax cuts in that year alone. The richest 1 percent of Americans would receive 85 percent of that windfall. 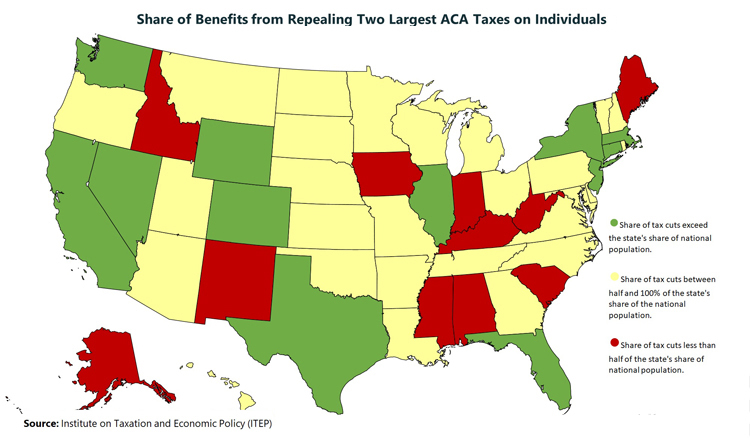 The Medicare wage tax increase applies only to earners with wages exceeding $200,000 ($250,000 for married earners) and the investment income tax only applies to those with income exceeding $200,000 ($250,000 for married couples). Of course, some states have a higher share of residents with high incomes so it is not surprising that some states receive a greater share of the tax cuts.

Keep in mind that there is no state where a majority of residents support the GOP health care plan. Polling shows that even in states that tend to heavily vote Republican, support for the GOP plan does not reach 40 percent and in most states is considerably lower.

There does not seem to be much of a relationship between support for the GOP health care plan and the share of the tax breaks going to each state. And perhaps that makes sense because even in relatively wealthy states, the share of people who can reasonably think they are rich enough to benefit from these tax breaks is just too small to have much impact on overall support for the legislation.

The ITEP data show that in the District of Columbia, only 6.3 percent of taxpayers benefit, while in Massachusetts the figure is just 5.1 percent. For other states the figure is below 5 percent and in most cases below 3 percent.

It is probably intuitive to most people in every state that they are far more likely to lose coverage or pay higher premiums under the GOP plan than they are to receive a tax cut.