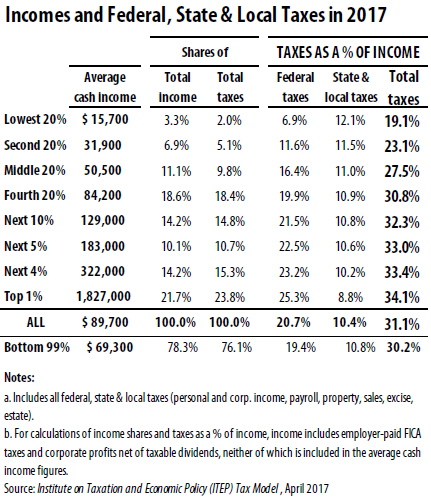 The federal income tax by itself is progressive. But when all taxes we pay are taken into account, most of that progressivity disappears. Those who advocate for tax cuts for the highest earners and erroneously claim that the wealthy are overtaxed focus solely on the federal personal income tax, while ignoring all of the other taxes that Americans pay. As the table on this page illustrates, the total share of taxes (federal, state, and local) that will be paid by Americans across the economic spectrum in 2017 is roughly equal to their total share of income.

Many of the taxes we pay are regressive, meaning they take a larger share of income from poor and middle-income families than they do from the rich. To offset the regressive impact of payroll taxes, sales taxes, and even some state and local income taxes, we need federal income tax policies that are more progressive than they are now.

These tax credits are only available to taxpayers who work and therefore pay federal payroll taxes. These progressive provisions do make the income tax more progressive, but overall they do little more than offset the regressivity of other taxes that poor and middle-income families pay.

Estimates from the Institute on Taxation and Economic Policy Tax Model, which are illustrated in these charts and tables, include the following key findings: 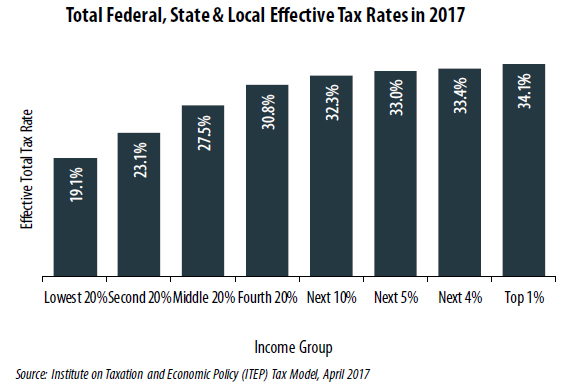 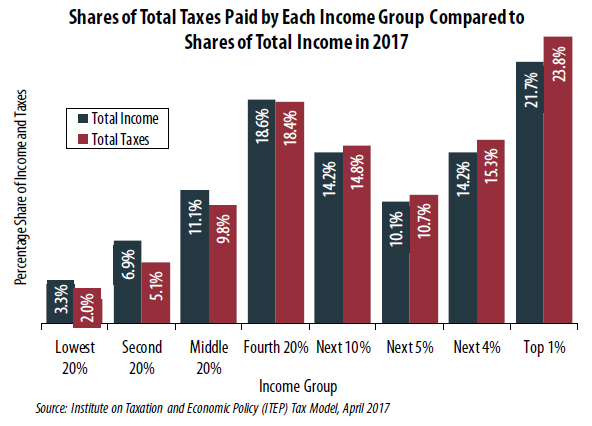 Impact of the “Better Way “ Tax Plan on Who Pays Taxes

The most prominent current proposals to restructure the federal tax system would make the system substantially less fair. ITEP’s analysis shows that the so-called “Better Way” tax plan, proposed in 2016 by House Speaker Paul Ryan, would result in a tax system that redistributes income away from the poorest 99 percent of Americans and toward the best-off 1 percent.

A June 2016 Citizens for Tax Justice (CTJ) report using the ITEP Microsimulation Model found that the Ryan plan would reduce effective tax rates on the best-off Americans by 8 percent, four times bigger than the effective rate reduction on any other income group. (CTJ’s Ryan analysis, like ITEP’s analysis in this report, excludes the effect of a proposed “border adjustment tax” (BAT) that would likely violate World Trade Organization rules. Including the BAT would likely result in an even more unfair tax system, since much of the tax increase under the BAT would likely fall on middle- and low-income consumers in the form of higher retail prices.) The chart on this page shows how the Ryan plan’s provisions would, if fully implemented in 2017, change the overall tax incidence picture described in this report.

Under current law, effective tax rates for the best-off 1 percent are at least slightly higher than the tax rates on all other income groups. But under the Ryan plan, the best-off Americans would pay a smaller share of their income in federal, state, and local taxes than the four income groups immediately below them. In particular, the 28.1 percent effective tax rate on the top 1 percent would be lower than the rate paid by the rest of the top 40 percent of the income distribution.

This means that under the Ryan plan, our federal tax system would redistribute income away from the poorest 99 percent of Americans as a group, and shift income toward the top 1 percent: while the best-off Americans would enjoy 21.7 percent of all income, they would pay only 21.0 percent of all federal, state, and local taxes. Put another way, our tax system would no longer be even slightly progressive where it matters most—at the very top of the income distribution. 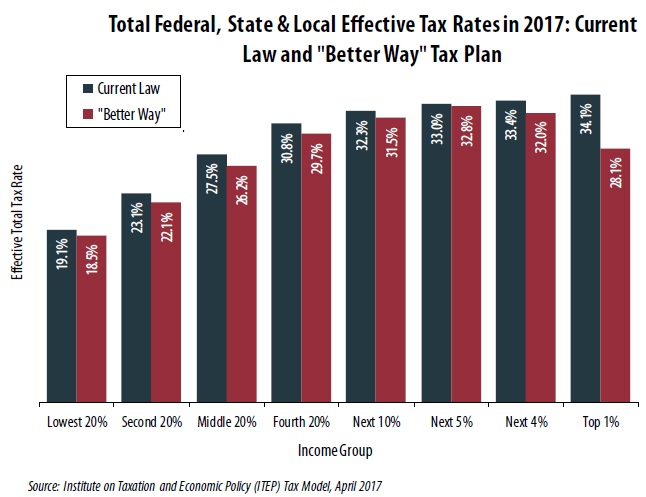