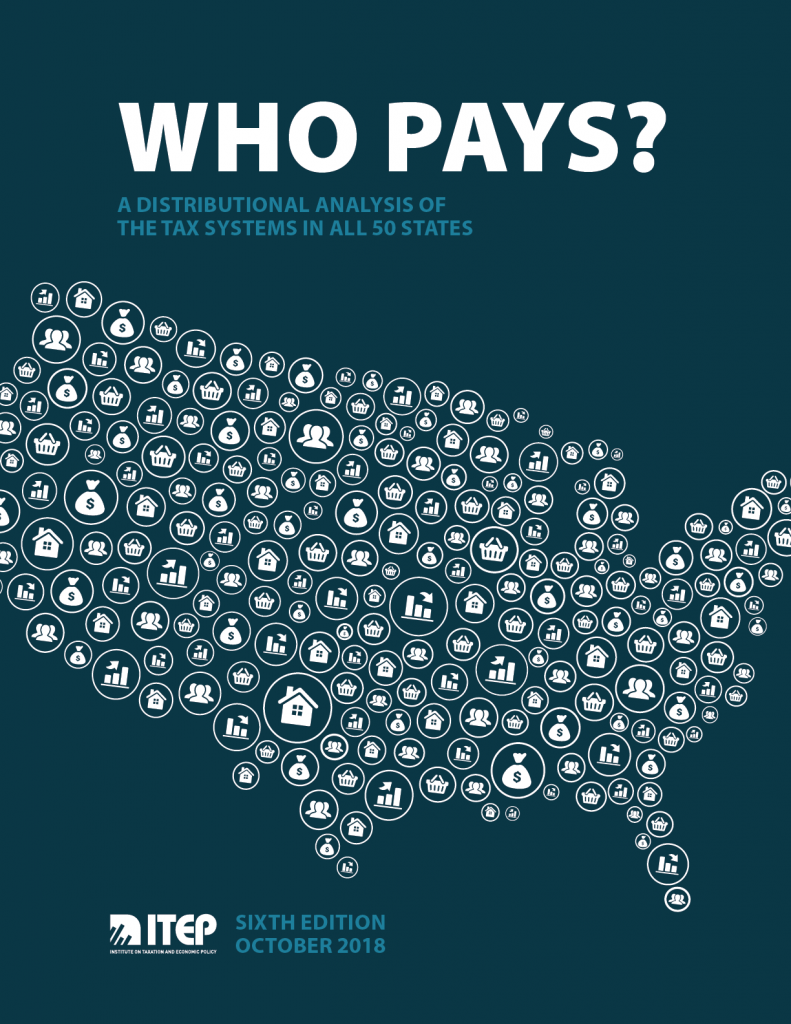 Who Pays? A Distributional Analysis of the Tax Systems in All 50 States is the Institute on Taxation and Economic Policy’s flagship report. First published in 1996, and updated most recently in 2018, Who Pays? shows the distributional impact by income level of all major state and local taxes in each state, as well as in the District of Columbia. Its major finding is that, on average, state and local tax systems require the poorest taxpayers to pay the highest effective tax rates. The report has been used by countless policymakers, journalists, advocates, researchers, citizens, state revenue departments, legislative fiscal offices, and other key stakeholders since its publication.

The Institute on Taxation & Economic Policy (ITEP) has engaged in research on tax issues since 1980, with a focus on the distributional and revenue consequences of both current law and proposed changes. ITEP’s flagship publication is Who Pays? A Distributional Analysis of the Tax Systems in All 50 States. The sixth edition of Who Pays?, published on Oct. 17, 2018, finds that the vast majority of state and local tax systems are regressive, asking more of low- and moderate-income families than of the wealthy. The following are answers to frequently asked questions about the Who Pays? study.

How does ITEP calculate the effective tax rates contained in this report?

Who Pays? is produced using the ITEP Microsimulation Tax Model, which is capable of calculating the tax incidence by income group of taxes in all 50 states and the District of Columbia. The ITEP Model relies on a very large database of tax returns and supplementary information that is thoroughly calibrated to represent the U.S. population, and each state’s population. The base year of the ITEP Model database is Tax Year 2015; for years after 2015, the data are “aged” to reflect more recent shifts in the economy. Additional information on the ITEP Model is available here.

Which taxes are included in Who Pays?

The report includes three broad groups of state and local taxes: consumption taxes, including general sales taxes and specialized excise taxes; property taxes, including taxes on homes, businesses, motor vehicles, and estates; and income taxes paid by individuals and businesses. This is a study of state and local taxes and thus it excludes the impact of federal tax policies.

The taxes included in this report represent about 90 percent of all state and local taxes collected in 2015. Certain smaller taxes are omitted from the study due to a lack of adequate data.

ITEP includes all three major progressive sources of revenue available to states: personal income taxes, corporate income taxes, and estate taxes. The miscellaneous smaller taxes excluded from the study are neither significant nor progressive enough to change the study’s bottom-line finding that state and local tax systems tend to be regressive overall. In fact, a more comprehensive, state-specific tax incidence analysis undertaken by the Minnesota Department of Revenue reveals that many of the taxes omitted from Who Pays?, such as insurance premiums taxes, are regressive in their distribution. Moreover, Who Pays? also omits most fees, which are often steeply regressive.

In what year is the Who Pays? analysis based?

The study reflects permanent law enacted through Sep. 10, 2018. Due to data constraints, those laws are modeled on the economy as it existed in Tax Year 2015. This was the most recent year for which state-by-state IRS data were available at the time ITEP began work on its updated taxpayer database. The lag time in reporting of property tax data is another reason the study was performed at 2015 income levels.

Which taxpayers are included in Who Pays?

The report’s universe of taxpayers includes most, but not all, residents of each state. We exclude elderly taxpayers because state tax structures routinely treat elderly families more generously than other families; for this reason, including seniors in distributional analyses of state tax systems can present an inaccurate view of how tax systems affect most families. Additional discussion of elderly taxpayers is available in the report’s methodology, starting on page 137.

The study also excludes dependent filers and those with negative incomes; all other Americans living in each of the fifty states and the District of Columbia are included. These exclusions mean the report’s universe includes all non-elderly taxpayer units, including single taxpayers, families headed by married couples, and families headed by single parents.

ITEP’s model also estimates the amount of unreported and underreported income of each type in each state. These estimates are based on data from a series of Internal Revenue Service research reports that measure the income “tax gap” – the difference between the amounts of various types of income that are reported for tax purposes each year and the (larger) amounts that are actually earned.

Does Who Pays? consider taxes paid over taxpayers’ lifetimes?

This study is an annual tax incidence analysis, which is standard practice for this type of research. Official state-level tax incidence analyses in states such as Colorado, Maine, Minnesota, and Texas also employ an annual lens. While there is academic literature looking at taxes paid by individuals and families’ over their entire lifetimes, these longer time horizons obscure the impact of taxes at critical moments in taxpayers’ lives, such as when they are new to the labor force or are recently unemployed and struggling to make ends meet.

Who Pays? shows the impact of state and local taxes on a given state’s residents (this is true both in general and for sales tax in particular). Therefore, the portion of sales taxes paid by visitors does not appear in the study, and taxes initially paid by businesses that are later passed through to consumers in other states are also excluded from the study’s distributional tables.

Why does this edition exclude the federal offset?

Can I compare editions of Who Pays? to see how recent tax policy changes have affected the distribution of state and local taxes?

The methodology used in this study is broadly similar to the approach used in previous editions of the report. However, we have recently made several methodological improvements impacting both income estimation and tax modeling. For this reason, we discourage direct comparison of the report’s results with prior editions.

The effective tax rates calculated in this report also differ, in many states, from those reported in prior editions of the study because of changes attributable not to state and local tax laws but to the business cycle. Moreover, long-run structural issues — such as shrinking sales tax bases — can also lead to changes in tax incidence over time, even absent specific changes in tax law.

Is government spending included in the study?

No. Who Pays? is a study of state and local tax systems, not government spending.

While some state and local government spending is targeted to specific income groups in a way that could, with some difficulty, be quantified, much of it is spent in a way that is much more difficult to attribute to specific income groups. For example, close to a third of state and local spending is on education, which directly benefits families with children but also benefits employers who hire individuals educated within a state’s public education system. State and local spending on police and court systems safeguards private property, including businesses, homes and intellectual property.

As it happens, the areas of spending for which it would be least difficult to estimate distributional consequences are the income-security programs that are targeted to low-income families. But states spend far more on untargeted programs that likely are most valuable for the best-off taxpayers.

Economically speaking, the best-off twenty percent of Americans are a diverse group that includes everyone from married couples earning a combined salary of $110,000 per year, all the way up to business executives and investors with annual incomes in the millions of dollars. Lumping these families together into one income group would obscure important differences among them.

Moreover, many states have rules in place that provide special tax breaks for capital gains and other income sources that are highly concentrated in the hands of the best-off 1 percent. An analysis showing the impact of a capital gains tax break on families in the top 20 percent of the income distribution would gloss over the substantial differences in how such a tax break treats the “poorest” and richest members of the top 20 percent.

Should states seeking to improve the distribution of their tax systems be concerned with revenue volatility?

All state tax systems are subject to some degree of volatility – meaning that revenues will rise or fall alongside changes in the economy. Severance taxes are among the most volatile sources of revenue collected by state and local governments as their yield can change dramatically when energy prices fluctuate. Personal income taxes and sales taxes are much less volatile by comparison, but their yield can vary during times of economic upheaval.

In the short run, sales tax revenues tend to fall during a recession as consumers cut back on major purchases such as automobiles and furniture. Similarly, income tax revenues can decline as workers are laid off and as the yield of investors’ stock portfolios falls. Both of these taxes are subject to degrees of volatility that require the creation and responsible use of Rainy Day Funds – accounts into which lawmakers can deposit revenues during good times for use when the economy dips and tax revenues fall short.

Over the long-run, personal income taxes have outperformed sales taxes as income growth — particularly at the top – has outpaced consumption. This affords personal income taxes a major advantage over sales taxes for budgeting purposes. The faster growth associated with income taxes offers states more freedom to set aside funds during good times, which is key to every state’s ability to weather an economic downturn without crippling cuts to public services.

The main purpose of state revenue systems is to raise sufficient revenues to fund public investments over the long term and a progressive personal income tax, coupled with prudent fiscal management of a meaningful Rainy Day Fund, is an effective tool for achieving this goal. Managing volatility does not require shying away from progressive revenue sources.

There is no clear evidence in the academic literature to support such a theory. According to a thorough review of the literature on this subject: “the research landscape fails to support claims that lower state and local taxes are always better for state economies.”

In fact, a recent ITEP study found that the states with the highest personal income tax rates on high-income earners are experiencing faster economic growth, more robust growth in average incomes, and lower unemployment rates than the states that refuse to levy income taxes.

There is also little evidence that higher taxes lead to meaningful levels of migration among high-income earners. A high-quality study conducted in 2016, using confidential tax return data, found that millionaires are less likely to move than most taxpayers and that any tax-driven migration among top earners is occurring “only at the margins of statistical and socioeconomic significance.”