If you listened closely to today’s House Ways and Means Committee hearing on the Tax Cuts and Jobs Act (TCJA), you could sense that the witnesses speaking in favor of the new tax law were not 100 percent on the same page. This has been apparent ever since the law was enacted at the end of last year.

Business leaders who want to build support for the new law speak about how it has led them to provide bonuses or, occasionally, permanent pay raises for employees. This is easily refuted. Americans for Tax Fairness has tabulated the available data and found that this year American corporations have spent $410 billion on stock buybacks but just $6.9 billion on bonuses and wage boosts.

The economists who speak in favor of the law (including Douglas Holtz-Eakin at today’s hearing) tend to focus on other indicators of its success. They know that the talk of bonuses and raises is nothing more than a desperate corporate PR campaign to save the law from being repealed or scaled back in the future.

The pro-TCJA economists argue that the law’s corporate tax cuts will lead to some benefits for workers (including more hiring and better compensation) but their argument involves a long chain of events that must take place before any benefits get to workers. They say that lower taxes will result in more investment in American companies, which will be spent on equipment and other things that make employees more productive, and this will result in higher wages. This would take years.

Of course, there are plenty of economists who note that any step in this story could break down and fail to lead to increased hiring and wages. Investment may not lead to increased productivity and even if it does, the gains may not go to workers given that organized labor may not be strong enough to demand its share.

But at least the pro-TCJA economists avoid, usually, claiming that workers are already benefiting from the law. As we pointed out earlier this year, experts at conservative organizations like the American Enterprise Institute and the Tax Foundation have openly written off all the bonus announcements as entirely irrelevant to evaluating the new tax law.

But the pro-TCJA economists’ argument has its own problem. As Paul Krugman has discussed, their story begins with corporate tax cuts leading to increased investment, and so far, there is not much evidence of that.

Steven Rattner testified before the committee that average business investment was higher from 2010 through 2016 than it has been so far in 2017. Granted, investment fluctuates a great deal. But it’s worth noting that investment was on an upswing before the law was enacted and it’s not obvious that the law is changing the trajectory.

Rattner presented the committee with a survey of Morgan Stanley analysts — not a group that has any obvious motivation to downplay the benefits of corporate tax cuts. The group believed that 43 percent of the corporate tax cuts would be spent on stock buybacks and dividends — would be given to shareholders, in other words. Another 19 percent would be spent on mergers and acquisitions. Just 17 percent would go to new investments and only 13 percent would go to workers as bonuses or permanent increases in compensation. 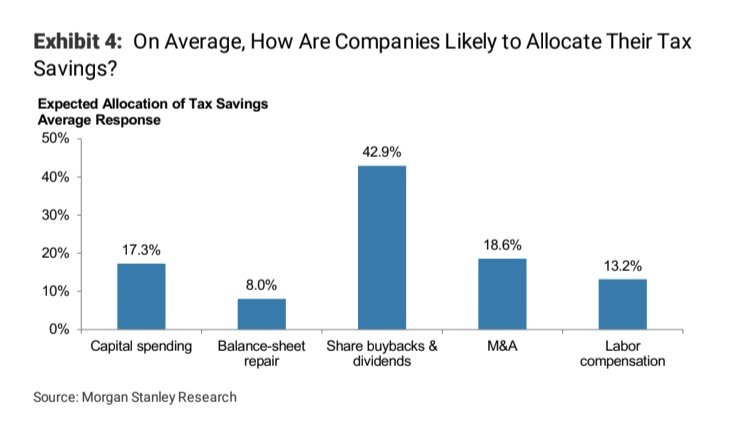 And even if investment does pick up, the law’s proponents have yet another problem they cannot explain away, which is that most of the benefits will go to foreign investors by the end of the decade according to the Congressional Budget Office. CBO found that in 2028 71 percent of the income growth caused by TCJA would go to foreign investors rather than Americans, partly because foreign investors own more than a third of the shares in American corporations.

So, if the business leaders and the economists who supported TCJA can’t seem to settle on an argument to support it, maybe that’s just because there really is no strong argument or evidence available to them.