A Comparative Analysis: Tax Rates Paid by Companies for and Against the Border Adjustment Tax

It’s often noted that corporate tax reform is difficult, in part, because it creates so many winners and losers. As Congress turns its attention to federal corporate tax reform, the House GOP’s proposed border adjustment tax, which is intended to raise enough revenue to justify cutting the corporate tax rate from 35 to 20 percent, is quickly demonstrating the truth of this statement. Corporate lobbyists representing different business sectors have created competing coalitions to lobby for and against the border adjustment: Americans for Affordable Products, a coalition of retail giants, opposes the plan, while the American Made Coalition supports it. 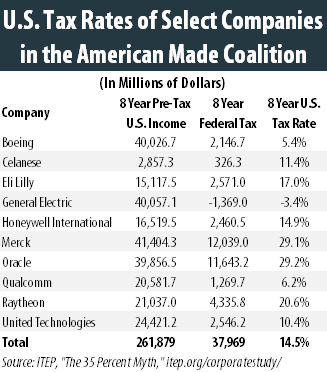 A close examination of average tax rates paid by companies in each coalition reveals the counterintuitive reality that those supporting the border adjustment tax are generally already paying low corporate tax rates, while those opposing the proposal are generally paying higher rates.

A recent analysis by the Institute on Taxation and Economic Policy (ITEP) revealed large profitable corporations paid an average effective federal income tax rate of 21.2 percent over the past eight years. Companies in the pro-border adjustment tax American Made Coalition paid an even lower rate. The 10 coalition members that were consistently profitable over the eight years between 2008 and 2015 paid an average tax rate of just 14.5 percent, a substantially lower rate than the Fortune 500 average of 21.2 percent. These companies likely pay relatively low tax rates because they benefit from a substantial number of tax breaks and can engage in more offshore tax avoidance. For example, American Made Coalition members are avoiding taxes on more than $600 billion in earnings that they are holding offshore.

In spite of their low average tax rate, members of the American Made Coalition argue that U.S. companies pay the highest effective tax rates in the world, even though the tax rates paid by many of its members are a stark reminder that many U.S. companies are in fact paying extremely low or even negative tax rates on billions in profits. 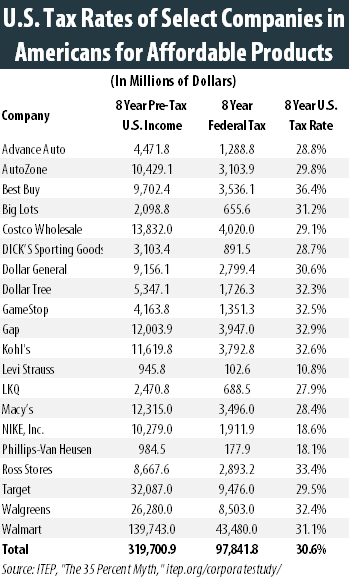 In contrast, an ITEP analysis finds that the companies in the Americans for Affordable Products coalition paid a comparatively high effective tax rate on average over an eight-year period. In fact, for the 20 companies in the coalition that were profitable over the same eight-year period, their average effective tax rate was 30.6 percent, substantially higher than the 21.2 percent rate for all large profitable companies and more than double the 14.5 percent rate paid by companies in the American Made Coalition. The likely explanation for these companies’ tax rates is that the bulk of the companies in the coalition are retailers, which have fewer opportunities to shift their profits offshore or take advantage of major tax breaks such as accelerated depreciation.

Under the border adjustment tax provision, revenue earned by companies from exports in the United States would be exempt from taxation, and the cost of imports to companies in the United States would no longer be deductible. What this means in specific terms is that companies with lots of exports, such as Boeing or General Electric, could end up with zero or substantially negative tax rates since they would be able to deduct the expense of producing their exports but would not have to pay any tax on the income that they generate from these exports. Alternatively, companies with a lot of imports, such as Wal-Mart or Target, could end up paying tax rates significantly higher than the 35 percent rate since they will not be able to deduct the cost of imports.

Given these dynamics, it is no wonder that export heavy groups are lining up in favor of the border adjustment tax, while import heavy groups are lining up against it. What is surprising is that so many lawmakers in Congress are pushing a policy that would make our tax code more unfair by heaping even more tax breaks on profitable corporations that aren’t even paying half the federal statutory tax rate.

Corporate tax reform should not create more winners and losers. Instead, Congress should focus on closing tax loopholes and raising more revenue from corporations overall.