Historic and current injustices, both in public policy and in broader society, have resulted in vast racial disparities in income and wealth. State and local governments can lessen those disparities through deep investments in education, health, childcare, and other priorities essential to broadly shared prosperity. But the way in which states raise those revenues also matters. A new ITEP report reveals how different taxes have very different impacts on racial equity and unveils data for two states showcasing the consequences of their contrasting tax policy choices. In short, we find that income taxes can help narrow the racial income and wealth divides while sales taxes generally make those divides worse.

Sales and other consumption taxes tend to be the most regressive taxes levied by states. They ask more of low- and middle-income families than wealthy families because lower-income families spend much more of what they earn on basic expenses. Higher-income households, which are predominately white, can set aside much of their income as savings and substantially delay or entirely avoid paying sales taxes. In other words, sales taxes tend to ask the least of white families building large amounts of wealth while asking more of lower-income families who are unable to set aside significant amounts in savings. Our analysis of Tennessee’s sales and excise taxes found that the average Black or Hispanic family devotes about 5 percent of their earnings to paying these taxes, compared to the average white family who devotes just 3.9 percent.

Real estate property taxes also have significant implications for racial equity. These taxes tend to be somewhat regressive overall because lower- and middle-income families spend a large share of their earnings on housing subject to the property tax. But long-running disparities in housing policies, mortgage lending, and intergenerational wealth have created an enormously unequal distribution of homeownership and housing wealth across race that has important implications for the property tax.

Residential segregation and a heavy concentration of property wealth in the hands of white families bring higher property tax revenues and better-funded schools in majority white areas. One national analysis found that the average predominately white school district has an additional $2,226 in funding per student compared to the average predominately nonwhite school district—a disparity that creates early advantages for white students and disadvantages for many children of color. Even within the same school district, people of color often get a bad deal as Black and Hispanic homeowners are systematically over-assessed relative to white families living in homes with similar market values.

Compared to taxes on sales or real estate, taxing income or overall wealth offers a far more promising path toward narrowing economic disparities across race. Estate and inheritance taxes, which apply when large amounts of wealth are transferred from one generation to the next, can directly counteract racial wealth inequality but are a relatively minor component of state and local revenue systems. A broad-based, annual wealth tax would be an even more powerful tool for accomplishing this goal but no state levies such a tax today.

Personal income taxes are among the most powerful tools states and localities have at their disposal for narrowing racial income gaps and, indirectly, racial wealth gaps as well. The best designed income taxes have higher rates on top earners, robust and refundable credits for low-income families, and a broad base free of top-heavy tax subsidies for wealth such as investment income, business profits, or homeownership.

To illustrate how tax policies that might appear race-neutral can have disparate racial impacts, we analyzed taxes in Minnesota and Tennessee: two states that have made very different tax policy choices. Tennessee lacks a personal income tax and therefore leans heavily on sales taxes to fund government. As a result of these choices, Black families pay an additional 1 percent of their income in Tennessee state and local taxes relative to the statewide average while Hispanic families pay an additional 0.9 percent. In other words, the way in which Tennessee taxes are collected actively worsens the state’s racial income disparities. 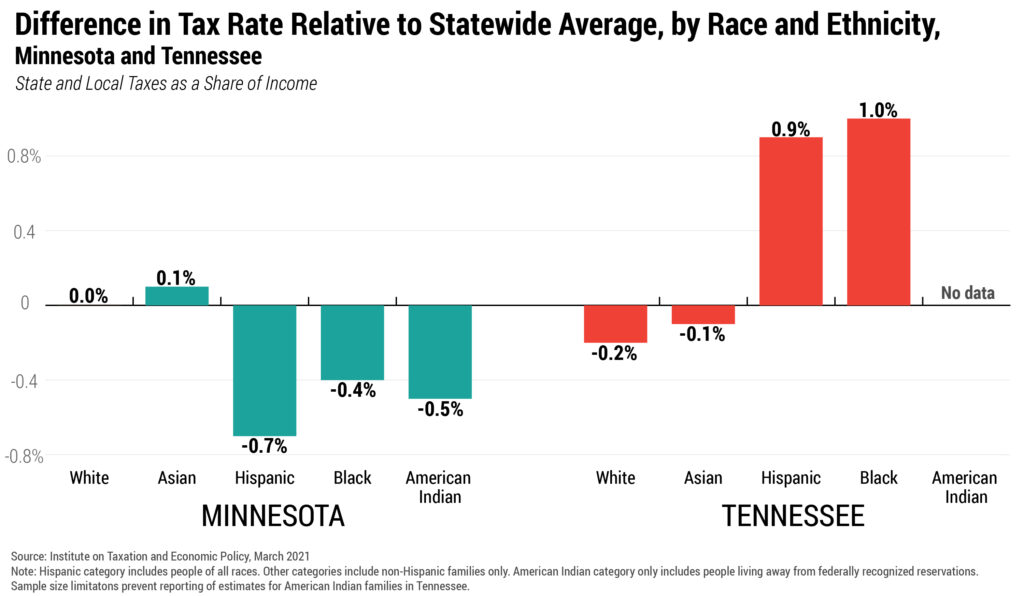 Minnesota, by contrast, levies a robust personal income tax with refundable credits for low-income families and higher rates for top earners, thereby allowing the state to rely less heavily on regressive sales taxes. Overall, Minnesota’s tax system slightly mitigates racial income inequality by tending to tax people of color at slightly lower rates than white families with higher incomes. Though its effectiveness in doing so is undercut by issues such as assessment discrimination under the property tax and the subsidization of higher-income homeowners with preferential treatment under the income tax.

To be clear, both Minnesota and Tennessee are confronting staggering degrees of economic and racial inequality even after taxes are collected. State and local tax policy on its own will not close the unconscionable gaps in income and wealth across race. But a problem as large as our nation’s racial disparities requires a multifaceted solution, and well-designed tax policies have a role to play in lessening those inequities and moving the nation toward a more just future.