A financial transaction tax (FTT) has the potential to curb inequality, reduce market inefficiencies, and raise hundreds of billions of dollars in revenue over the next decade.

Most proposed FTTs would apply to trades at what appear to be very low rates, such as 0.5 percent, 0.1 percent, or much less. But because the volume of financial transactions is so vast, these proposals would nonetheless raise hundreds of billions of dollars over a decade, even accounting for the reduction in trades that would likely result. The people most likely to bear this cost are disproportionately well-off. This, combined with the investments that could be financed with an FTT, could reduce income inequality and wealth inequality. How policymakers design the tax matters a great deal for its effectiveness and revenue impact.

An FTT would raise the costs of trading financial assets, resulting in fewer trades. In one scenario the costs would be passed on entirely to investors. In another possible scenario, some investors could save money and at least a portion of the tax would ultimately be borne by the owners and employees of financial institutions that carry out trades. In either scenario, an FTT would be a progressive tax.

However, the second scenario could come about because there is evidence that a portion of today’s trading in financial assets is not in the interest of investors. Instead, it is engineered only to generate fees for financial institutions, as explained further on. In this case, an FTT that reduces trades would actually create savings for investors and the costs would be borne by those who own financial institutions (as shareholders or partners) and those who work for them. Since this is likely to be a relatively wealthy group of people, in this case, too, an FTT would reduce inequality.

Both of these scenarios are described further below.

While financial institutions may directly pay an FTT, the tax could be passed onto investors as increased transaction costs or the choice by investors to forego trades that would otherwise be profitable, which would reduce the value of financial assets.[1] 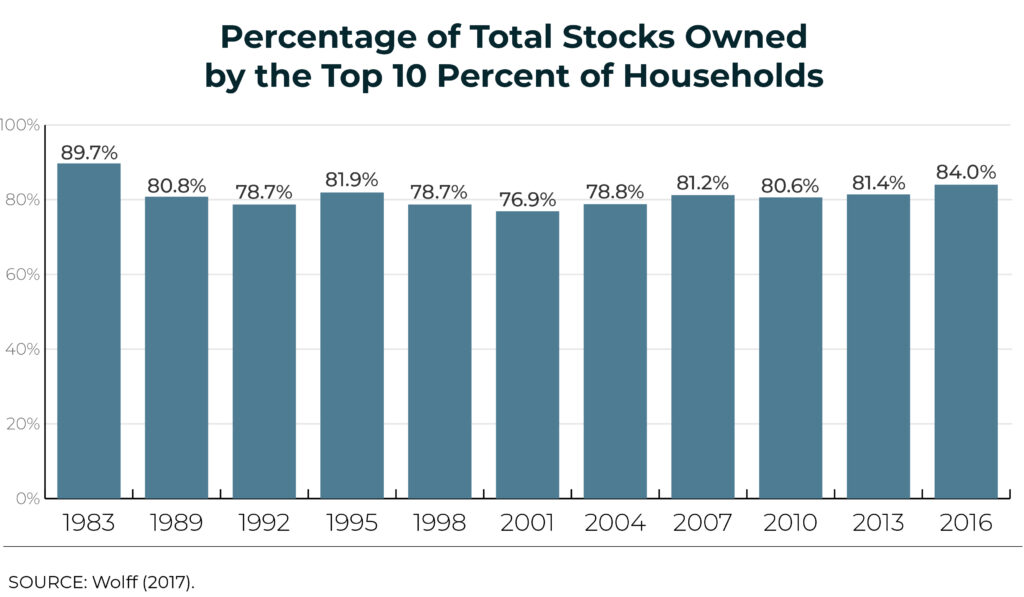 On the other hand, part of the cost of an FTT could be borne by those who own financial institutions (as shareholders or partners) or work for them. An FTT would reduce demand for trades, which generate fees for these institutions.

There is evidence that some transactions in today’s market merely churn assets, generating fees for financial institutions without representing any novel investment.[4] For example, financial assets held with Vanguard are traded less and therefore subject to lower fees than assets held in other investment companies, and yet Vanguard funds do not differ in performance when compared to others.[5]

An FTT would discourage this churning by marginally increasing transaction costs. Because trading volume is relatively elastic, or reactive to changes in price, research suggests an FTT would reduce the volume of trades and potentially disincentivize the unproductive trades that produce some of the financial industry’s profits.[6],[7]

This would mean that some of the cost associated with an FTT would be borne by the owners and highly paid employees of the financial institutions conducting these trades.[8] For many investors, the result could be savings because they are no longer paying for unproductive trades.

Any Impact on Retirement Savings Would Be Minimal

While the vast majority of the impact of an FTT would fall on the wealthy, opponents often focus on the very small fraction of the tax that could be borne by the middle-income households with retirement savings. In theory, anyone owning stock indirectly through a mutual fund or other savings vehicle could be affected because the increased cost of trading assets would be passed onto them.

As already explained, an FTT could reduce unproductive trades, those not in the interest of investors and that serve no purpose other than to generate fees for financial institutions. In this case, households with retirement savings could see lower costs, rather than higher costs, resulting from an FTT.

But even if one assumes that an FTT does not affect the volume of trades and that the cost is entirely passed onto investors, the impact on middle-income families saving for retirement would likely be extremely small.

The Public Citizen report also provides an alternative methodology using data from the Investment Company Institute, an organization that opposes any FTT. Using these data, the report concludes that the average impact for households in the middle 20 percent with retirement savings would be between $13 and $35 in a year. It seems that regardless of which methodology is used, it is very difficult to conclude that an FTT would substantially affect middle-income families.

An FTT would raise the costs of financial transactions, resulting in fewer of them. How this affects the overall economy depends on whether the trading that is reduced is itself beneficial and, if it is, whether the reduction will be significant enough to have an impact that goes beyond the investors and traders involved.

Some of the trading that would disappear is not beneficial to the broader economy. As already explained, it is likely that financial institutions sometimes carry out unproductive trades, financial transactions that are not in the interests of their clients, the investors.

For example, “flash trading“ is unproductive from the perspective of society at large because it rewards manipulation of the machinery of the marketplace rather than rewarding sound investments. Essentially, investment decisions are not made based on whether a particular business or venture is profitable but because computer algorithms allow traders to view orders from participants in the market seconds before the information is available to other parties in the market.

Flash traders profit by manipulating the system based on asymmetrical information and making large volumes of trades. Because an FTT would increase the cost of each trade, this type of high-frequency trading would be especially likely to decline, thereby reducing these unproductive transactions.[13]

Effects on Liquidity Not Likely to Be Significant

Critics of financial transaction taxes argue that they will damage markets by reducing liquidity, resulting in more harm than good. Liquidity simply means there are many parties buying and selling assets so that an additional transaction will not affect the price of the asset or the overall functioning of the market for it.

But liquidity has increased vastly in recent years and an FTT has the potential to reverse that trend only to a small extent. Generally, economists and traders think a market is liquid if there is little difference between the price that those bidding on an asset are willing to pay and the price those selling the asset are asking for. The difference between the two (the bid-ask spread) on the New York Stock Exchange fell from an average of 1.3 percent in the 1980s to just 0.1 percent in recent years.[14] It is difficult to believe that an FTT at the rates often proposed (for example, the 0.1 percent rate proposed in the Wall Street Tax Act) would reverse this trend dramatically.[15]

The type of liquidity seen in today’s markets, rife with flash trading and excess churning, is not obviously helpful and there is little reason to fear a tax that would do more than rein it in modestly.

Critics also overlook the fact that reducing inequality in itself could improve economic growth prospects.[16] Evidence suggests more equitable societies have higher rates of growth in the long term (Boushey, 2019).[17] According to a new book by Washington Center for Equitable Growth President and CEO Heather Boushey, the wealthy are more able to effectively monopolize access to opportunity in less equal societies, obstructing the supply of talent and ideas, and undermine private-sector competition. Additionally, inequality distorts consumer demand as employers rob workers of wages, benefits, and buying power, reducing the overall resilience of the economy. A financial transaction tax would aim to reduce income inequality, as the revenue from the tax—disproportionately raised from the top of the income spectrum—could be used to invest in a wider swath of the U.S. public.

Proposals to tax financial transactions vary widely. The scope of transactions covered by the tax and the tax treatment of those various trades ideally should be equitable to reduce opportunities for gaming the tax, minimizing tax avoidance caused by shifting assets among classes.

There are two different FTT proposals before Congress right now. Sen. Bernie Sanders and Rep. Barbara Lee have introduced the Inclusive Prosperity Act of 2019 (H.R. 2923/ S.1587) and Sen. Brian Schatz and Rep. Peter DeFazio have introduced the Wall Street Tax Act of 2019 (H.R. 1516/ S.647).[20] While both impose taxes on a fraction of the value of all trades of stocks, bonds, and derivatives, their rates differ. The Wall Street Tax Act would impose a tax of 0.1 percent (or 10 basis points) on the sale of all three types of trades, whereas the Inclusive Prosperity Act would impose a 0.5 percent tax on stock trades, a 0.1 percent tax on bond sales, and a 0.005 percent tax on the sale of derivatives. This latter approach seeks to minimize the economic distortions of the tax, attempting to equalize the increase in transaction costs across securities and avoid creating new loopholes.

The Wall Street Tax Act could raise as much as $777 billion over the next decade (see CBO’s description here).[21],[22] The Inclusive Prosperity Act could raise roughly $600 billion over a decade.[23] (Because these estimates are influenced by assumptions about how an FTT would impact patterns of financial activity, it is worth considering how volume reductions could impact revenues. See, for example, Table 1, in Bivens and Blair 2016.[24])

Revenue of this magnitude could provide funding for needed public investments. Presidential candidates have proposed using an FTT to fund expanding Medicare, education, child care, and investments in children’s health.[25] Any of these public investments would be progressive, narrowing resource gaps between the most vulnerable families and the most fortunate. These investments would also disproportionately benefit the same households, which have otherwise been locked out of the increases in wealth created by the disproportionate growth of the financial sector.

[9] Nick Buffie, “The Growth of Finance, In Graphs,” Center for Economic and Policy, April 12, 2016. http://cepr.net/blogs/cepr-blog/the-growth-of-finance-in-graphs

[16] Heather Boushey and Somin Park, “Fighting inequality is key to preparing for the next recession,” Economic Policy Institute, May 15, 2019. https://www.epi.org/blog/fighting-inequality-is-key-to-preparing-for-the-next-recession/

[17] Washington Center for Equitable Growth, “Unbound: How Inequality Constricts Our Economy and What We Can Do About It,” https://equitablegrowth.org/unbound-how-inequality-constricts-our-economy-and-what-we-can-do-about-it/