Nearly two dozen of America’s largest corporations together received roughly $50 billion in tax breaks from 2018 through 2021 under a Trump tax law provision that many lawmakers now want to extend. Corporate lobbyists are even asking Congress to extend this “accelerated depreciation” tax break as part of a possible year-end tax bill.[1]

Many of these companies are household names like Google, Facebook, Intel, Target and J.P. Morgan. And many have used accelerated depreciation to drive their effective tax rates down into the single digits. These include Verizon, FedEx, Walt Disney, General Motors, Bank of America and Amazon.

Federal tax rules have long permitted accelerated depreciation, which allows businesses to deduct the costs of equipment more quickly than it wears out. But the Tax Cuts and Jobs Act enacted under former President Trump in 2017 provided the most extreme version of this tax break, often called “bonus depreciation,” allowing businesses to write off the entire cost of equipment in the year it is purchased.

The Trump tax law allows bonus depreciation through 2022, but corporate lobbyists are pushing Congress to extend it and make other changes that would expand that law’s other corporate tax breaks.[2]

The figures in the table come from the disclosures that publicly traded corporations provide to the Securities and Exchange Commission and make public.

Altogether, these 23 corporations saved $49.6 billion in taxes due to accelerated depreciation during the first four years the Trump tax law was in effect (2018-2021). Without bonus depreciation, this figure would be much smaller. During this period, these companies together reported paying $78.6 billion in federal corporate income taxes, which is only 8.9 percent of their combined reported profits of $886.6 billion.

The federal statutory corporate income tax rate is 21 percent, which means that if corporations enjoyed no special breaks or loopholes at all, they would pay 21 percent of their profits in taxes. As a group these corporations used many kinds of tax breaks to drive their effective federal income tax rate from 21 percent down to 8.9 percent. For the whole group of companies, accelerated depreciation accounts for nearly half (46 percent) of those tax breaks.

Some companies were able to use depreciation breaks to drive their effective federal income tax rates much lower.

Verizon paid federal corporate income taxes of just 8.4 percent of its $88.2 billion in profits during this four-year period. Verizon’s total federal income tax breaks during this time were $11.1 billion, and nearly half (46 percent) of those breaks were for accelerated depreciation.

FedEx paid federal corporate income taxes of just 1.5 percent of its $11.6 billion in profits from 2018 through 2021. Its total federal income tax breaks over this time come to $2.3 billion – all due to accelerated depreciation. (Technically, FedEx’s accelerated depreciation breaks were even larger because apparently, without any tax breaks, the company would have paid an effective rate greater than 21 percent because taxes that it had previously delayed were coming due.)

The effects of accelerated depreciation on corporate taxes are taken from the 10-K forms that publicly traded corporations submit to the Securities and Exchange Commission and disclose to the public. The financial accounting rules that govern what is reported in the form do not allow the costs of equipment to be written off as quickly as the tax code does. The 10-Ks show the tax savings resulting from these favorable tax rules.

Depreciation reported under the financial accounting rules more closely reflects economic reality because those rules require the costs of investments in equipment to be written off over several years until the equipment is expected to wear out.

However, it would be a mistake to view accelerated depreciation as affecting only the timing of tax payments, as if the same amount of tax revenue will eventually be collected regardless of what tax depreciation rules are in effect. First, some corporations can use depreciation breaks each year, year after year, so they could avoid federal income tax for decades.

Second, a tax payment deferred is a tax payment that is partly avoided through the effects of inflation. For example, if a company owes $10,000 in income taxes for 2022 but can delay paying until 2030, the tax due in 2030 is effectively smaller because $10,000 will be worth less in 2030 than it is worth today. The federal government will effectively receive less. This is especially true in an environment with high inflation.

Of course, inflation is a real issue affecting the lives of Americans. Families everywhere are grappling with higher prices. It does them no good to provide a corporate tax break to reward businesses for making investments they would have made anyway.

Click the table below for more, including figures for each year during the four-year period. 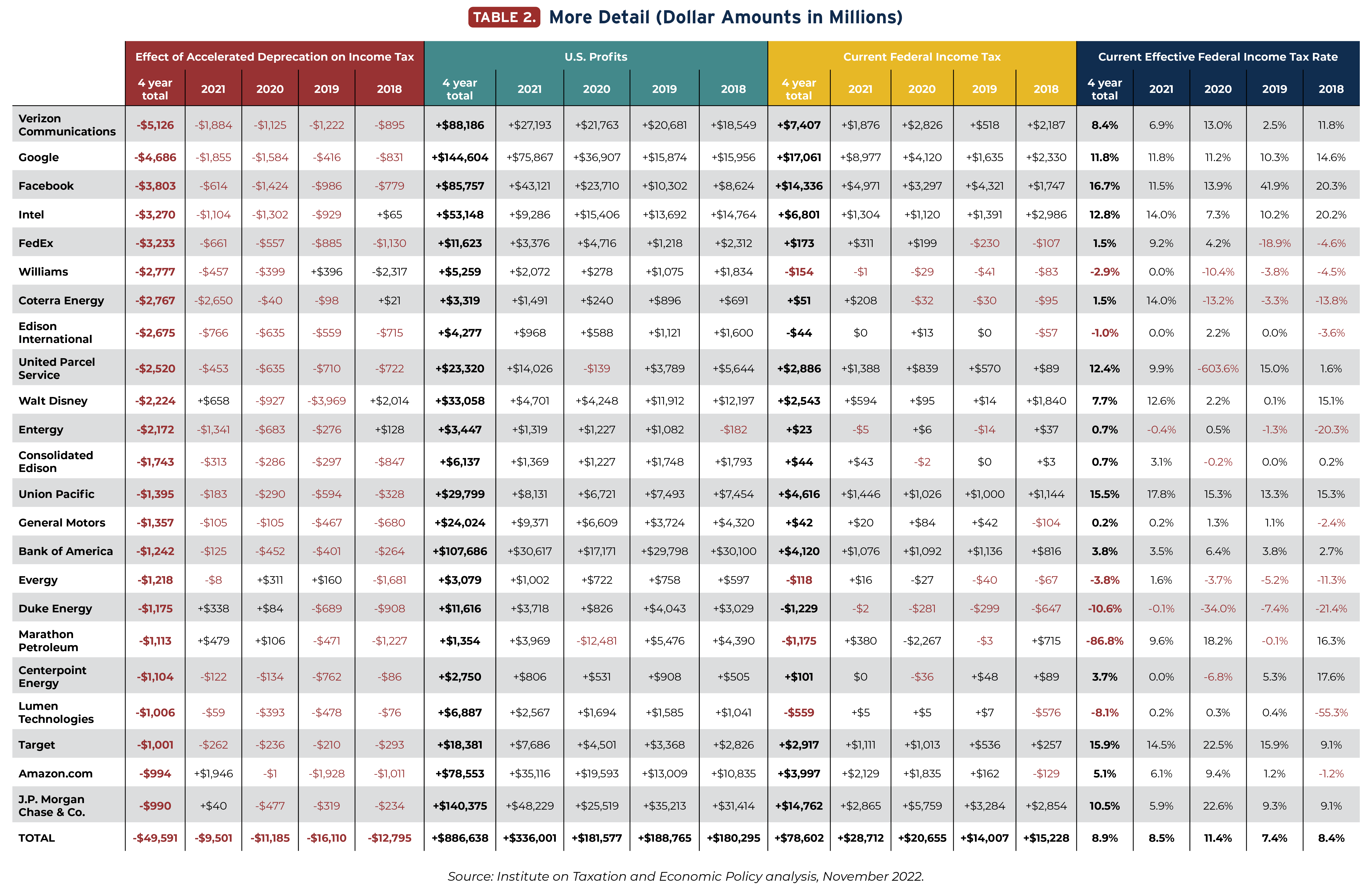 [2] Letter from the National Association of Manufacturers to the chairmen and ranking members of the Senate Committee on Finance and the House Committee on Ways and Means, September 27, 2022. https://documents.nam.org/tax/nam_tax_priorities_letter_september_2022.pdf

[3] Steve Wamhoff and Richard Phillips, “The Failure of Expensing and Other Depreciation Tax Breaks,” November 19, 2018, Institute on Taxation and Economic Policy. https://itep.org/the-failure-of-expensing-and-other-depreciation-tax-breaks/