If economics is the dismal science, then the economics of taxation is particularly hopeless. Listening to experts, you get the impression that no one can agree on how income is distributed, how it should be taxed, or whether certain forms of income can even be taxed effectively.

You want to tax investment income? Too bad, wealthy investors will hide their income or just stop investing and the economy will sink. You want to tax corporate profits? Impossible, corporations will just move offshore. The debate rarely explains how any of these purported outcomes would happen. Is the CEO of Boeing going to move to another country and work from there if that company is required to pay a respectable amount of taxes? But by this point in the conversation, many lawmakers are already sufficiently frightened away from trying to understand or address the situation.

Cue Emmanuel Saez and Gabriel Zucman. In their new book, The Triumph of Injustice, the economists, who already jolted the world with their shocking data on exploding income inequality and wealth inequality, tell us to stop acting like we are paralyzed when it comes to tax policy. There are answers and solutions. And in about 200 surprisingly readable pages, they provide them.

Their story begins by showing how income and taxes are distributed and how this has changed over time. The authors have a knack for generating debate among experts without anyone really challenging their important conclusions, and this new book is no exception. Significant attention has already been paid to their findings that the richest 400 households in the U.S. pay a lower effective tax rate (including all federal, state and local taxes) than the average paid by all Americans.

While some economists quibble with their methods, their conclusion is not surprising at all. ITEP’s estimated distribution of all federal, state and local taxes is not all that different. ITEP has not yet split the richest 1 percent into smaller groups as Saez and Zucman have. But it would not surprise us that very, very high-income groups within the top 1 percent pay a lower effective tax rate given that much of their income takes the form of capital gains or other investment income that is taxed very little or not at all. 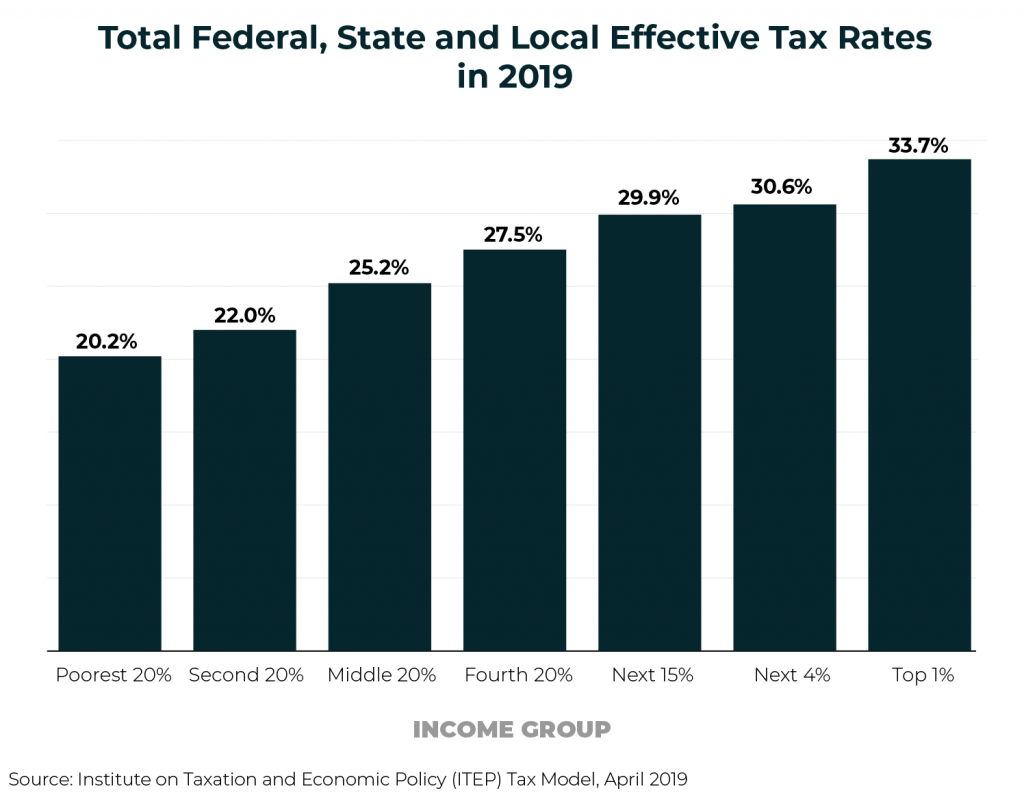 The authors find that the average effective tax rate overall is 28 percent; ITEP finds that it’s 29 percent. ITEP counts the refundable portion of tax credits as part of tax liability, resulting in lower effective tax rates for those at the bottom compared to Saez and Zucman. But overall the stories are similar. The idea that the rich (often referred to as “investors” or “job creators” by those who oppose taxes) are paying more than their share of taxes simply is not true.

Saez and Zucman show how this has changed over time. The overall effective rate has fallen significantly even since the mid-1990s, they explain, which is entirely believable given the tax legislation enacted over the past two decades alone. ITEP estimated that Congress cut taxes by more than $5 trillion from 2001 through 2018 and that two-thirds of the benefits went to the richest fifth of Americans and 22 percent went to the top 1 percent alone.

The Triumph of Injustice goes back even further, explaining how part of Roosevelt’s New Deal was quite consciously constraining income at the very top.

Some of the drop in taxes paid by the rich has to do with circumstances that policymakers simply did not predict and were not prepared for–like the sudden surge in globalization that made it more difficult for the IRS to know when profits booked offshore were really earned there or just shifted through accounting gimmicks to avoid taxes. But that does not mean that lawmakers are innocent bystanders.

Tax Dodging Is Not a Law of Nature But a Choice

Saez and Zucman are clear: Most of the decline comes down to choices made by policymakers and a different culture around how those choices are made. This is refreshing. Anyone who has advocated for progressive taxes is familiar with the feeling that policymakers have been convinced by special interests that they have no choices. For example, they claim that if we fail to cut corporate taxes, corporations will leave the U.S.

But the tactics corporations use to “leave” are fictions that exist only on paper and they can be blocked if Congress adopts different policies. Saez and Zucman provide examples, but we can think of even more. Inversions are one example–a gaping hole in the law allows American corporations to claim they have become foreign entities through mergers even though most of their ownership has not changed. Instead of plugging this obvious loophole, Republicans in Congress let it fester and grow into a crisis and then claimed that the crisis demonstrated the need to cut corporate taxes. Their argument is designed to make us feel hopeless about raising taxes when instead it should make us outraged.

Saez and Zucman explain everything in a very accessible way, particularly compared to most of what is written on tax policy. They do not mention the lawyerly term “controlled foreign corporation” but instead refer to the subsidiaries of multinational firms. They do not use the term “base-erosion” but instead point out that “by and large it’s paper profits that have moved to low-tax locales over the last decades–not offices, workers, or factories.”

No experts will agree 100 percent about how to describe certain policy issues. (The distinction between tax avoidance and tax evasion, which the authors dive into, could be a significant debate itself.)  But overall it is difficult to disagree with how they present the problems.

The authors argue that the obstacles to progressive taxation can be overcome, but that is not to say that the solutions are all simple. They say outright that hiking tax rates on individuals or corporations without making other changes to the code would be a mistake–it would leave in place all the techniques that are now available for tax dodging.

To fix the corporate tax, the authors provide solutions that start with what ITEP and others have long called for–the U.S. should tax the worldwide profits of American corporations, continuing to allow tax credits for taxes paid to other countries. This means that, effectively, the offshore profits of American corporations would not be taxed at lower rates than their domestic profits.

They then propose the more difficult work of coordinating tax rates with other industrialized countries. Presumably recognizing that international coordination on anything important is often a very long and daunting project, Saez and Zucman are quick to note that their other reforms would plug a lot of the holes even if there is no coordination.

But the idea of the G-20  governments getting together and setting a minimum tax rate may not be so far-fetched as it becomes increasingly obvious that the race to the bottom in corporate tax rates is not benefiting developed countries, who can never reduce their rates as low as the 0 percent offered by Bermuda or the Cayman Islands.

For taxing individuals, they start with proposals that are familiar, like ending the rules that tax capital gains and dividends at lower rates than other income. But the proposals go beyond that and sometimes sound like the sort of theoretically correct policies that lawmakers only occasionally consider, like providing a credit against the personal income tax for corporate taxes paid on profits distributed to shareholders as dividends. Saez and Zucman argue that if we really do ensure that corporations pay taxes, then it makes sense to provide a break from the personal income tax so that profits are not double-taxed.

Their list of proposals goes on to include a wealth tax even more aggressive than what Sens. Warren or Sanders propose and other items too numerous to list here.

Debatably, their most radical idea is to replace sales taxes and premiums paid for private health insurance with a flat rate “national income tax,” by which they mean a tax that would be paid mostly by businesses but designed in a way to apply to all types of income.

This tax would have a rate of 6 percent and would be paid by employers on all compensation (thus covering labor income), paid on all business profits with no deductions (except for economic depreciation), paid on any interest not included in business profits, and paid on any dividends or other income to the U.S. from foreign sources. Despite having a flat rate, this tax would be more progressive than the payments it would replace because it would apply effectively to all types of income.

The idea is thought-provoking and probably would work, but you don’t have to be persuaded by their more radical proposals to see that Saez and Zucman have once again pulled back the curtain on how our system is failing and how solutions are within reach.