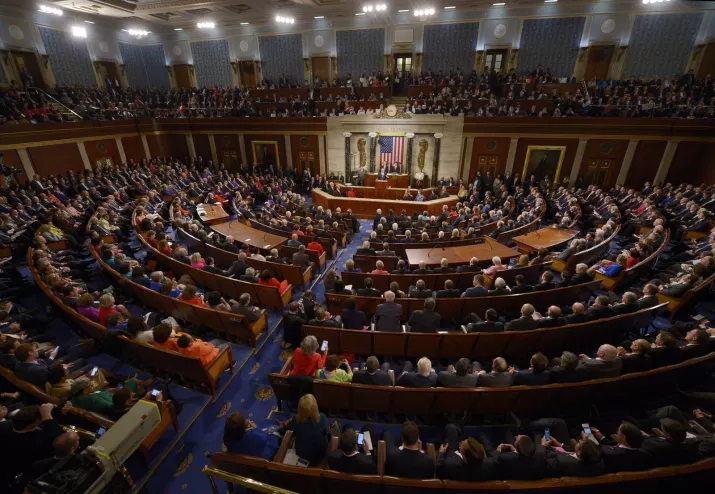 Here are some claims about taxes that the President made during his State of the Union address, along with the facts.

Does the middle-class benefit?

Comparatively speaking, they get crumbs while wealthy households and foreign investors get a feast.

An ITEP report split Americans up into five equal groups based on income and found that foreign investors get a larger share of the benefits than any group except the richest 20 percent. Foreign investors own more than a third of the stock in American corporations, which means they get a big share of the benefits from the corporate tax cut that is the centerpiece of the GOP-Trump tax law. 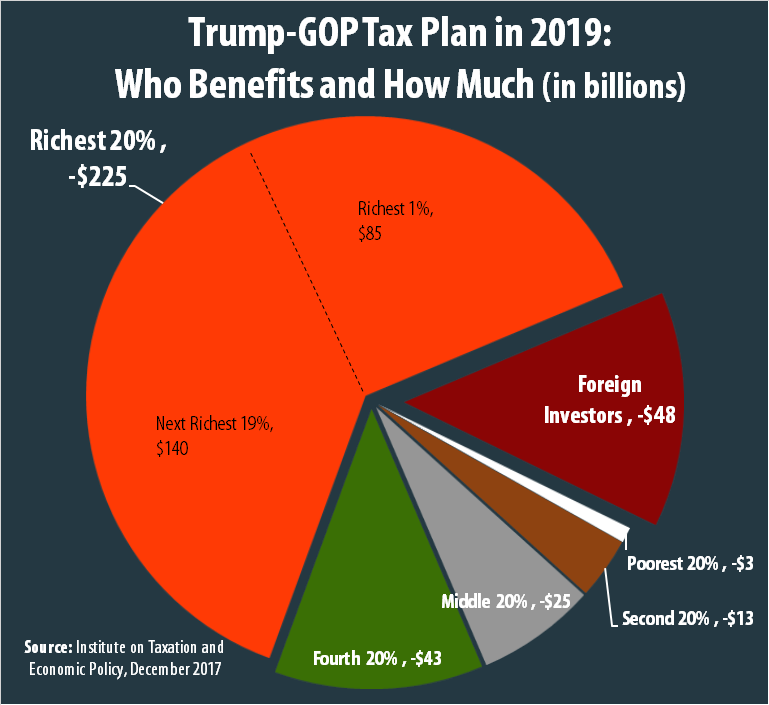 And this is before we even think about the cuts in federal programs that will inevitably follow the $1.5 trillion increase in the deficit. These program cuts are likely to adversely affect the poor and middle-class, not the rich.

If by “small business” you mean “rich people,” then yes.

The main provision of the new law that will allegedly help small businesses is a new 20 percent deduction for income from businesses that are called “pass-throughs” because their profits pass through to their owners and are reported on their personal income tax returns rather than being subject to the corporate income tax.

“Since we passed tax cuts, roughly three million workers have already gotten tax cut bonuses. Many of them, thousands and thousands of dollars per worker and it’s getting more every month, every week.”

For example, Disney’s annual tax savings could be around $1.2 billion, nearly 10 times the size of its announced bonuses. Walmart is spending $300 million on one-time bonuses and an increase in its starting wage. The sum is a fraction of its $2.2 billion a year in tax breaks.

Most of the widely touted announcements have been about one-time bonuses, not a permanent commitment to increase workers’ pay. The few companies, like Walmart, that have announced pay increases seem to be responding to the economic improvement that has been ongoing for a few years now. For example, Walmart has increased its starting wage several times over the past several years to keep up with Target. No doubt many companies find it politically advantageous to flatter the administration by claiming its policies are the reason for any pay increase, bonus or new investment.

Many corporations announcing bonuses due to the Trump-GOP tax bill have been paying low effective tax rates for years so it’s hard to believe taxes were ever holding back employee pay in any way.

Even those economists who supported the corporate tax cut do not believe it would immediately boost worker pay.

As we explained last week, even economists who claim corporate tax cuts benefit workers believe that process would take a long time. They argue that companies use their tax cuts to invest in ways that increase the productivity of workers, who can then bargain up their wages. While this theory is fundamentally weak, its proponents never claimed that it would all happen in a few weeks. That’s why even economists from conservative institutions like the American Enterprise Institute and the Tax Foundation have publicly stated that the recent corporate announcements are meaningless.

“Apple has just announced it plans to invest a total of $350 billion in America, and hire another 20,000 workers.”

Apple made no such announcement.

Apple, which is famous for shifting its profits into offshore tax havens like Bermuda, announced recently that over the next five years its “contribution to the U.S. economy” will be $350 billion, which apparently includes things like the purchases that will be made by other companies that do business with Apple. In fact, Apple’s statement does not even make clear that this is the result of the new tax law.

“And just a little while ago, Exxon Mobil announced a $50 billion investment in the United States.”

If anything was holding Exxon Mobil back from making this investment before, it wasn’t its tax bill.

While the official corporate tax rate was 35 percent, the last time Exxon Mobil paid even half of that was 2008. The company made about $60 billion in U.S. profits from 2008 through 2015 and over that period paid federal income taxes equal to just 13.6 percent of that amount. And, similar to Apple, it is not clear that the new investment is the result of the tax cut. Exxon Mobil said its investment is “enhanced by” the tax law, which could mean anything.

“And just as I promised the American people from this podium 11 months ago, we enacted the biggest tax cuts and reforms in American history.”

Not true. In fact, it’s not even close to being true whether you measure the tax cut in nominal dollars or as a share of our economy.

“We nearly doubled the standard deduction for everyone. Now, the first $24,000 earned by a married couple is completely tax-free. We also doubled the child tax credit.”

While this is literally true, it’s misleading because of what it leaves out.

For most people, there were two breaks in the old law that shielded some of their income from federal personal income taxes. It’s true that the new law nearly doubled one of them, the standard deduction, but it eliminated the other, the personal exemption.