Companies from Various Sectors Use Legal Maneuvers to Avoid Taxes

Profitable Fortune 500 companies in a range of economic sectors have been remarkably successful in manipulating the tax system to avoid paying even a dime in tax on billions of dollars in U.S. profits. This ITEP report examines a select, diverse group of 15 corporations’ tax situations to shed light on the widespread nature of corporate tax avoidance. As a group, these companies paid no federal income tax on $21 billion in profits in 2016, and they paid almost no federal income tax on $111 billion in profits over the past five years. All but one received federal tax rebates in 2016, and almost all paid exceedingly low rates over five years. 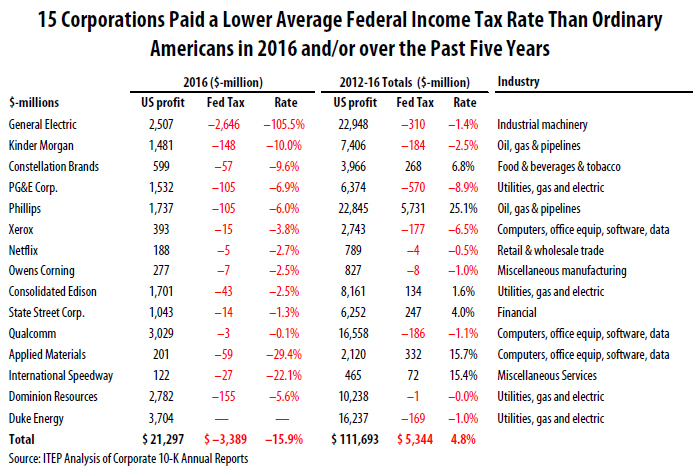 The companies profiled here represent a range of segments of the U.S. economy:

All 15 companies’ effective federal income tax rates for 2016 and the five-year period between 2012 and 2016 are shown in the table on the following page.

While recent policy discourse has focused on multinational corporations that use offshore tax havens to minimize their tax liability, the companies profiled here appear to be using a diverse array of other tax breaks to zero out their federal income taxes:[1]

Consolidated Edison, Duke Energy, Dominion Resources and PG&E used accelerated depreciation, a tax break that allows companies to write off the cost of their capital investments much faster than these investments wear out to dramatically reduce their tax rates. Citizens for Tax Justice (CTJ) has estimated that closing the accelerated depreciation loophole could raise more than $428 billion over the next decade.[2] Both Congress and President Trump, however, have supported expanding the scope of this tax break in recent years.

International Speedway zeroed out its income tax bill in 2016 thanks to the special “bonus depreciation” tax breaks included in the 2015 “Protecting Americans from Tax Hikes Act.” This provision allows companies to write off the cost of their capital investments—which in the case of International Speedway presumably means its race tracks, casinos and hotels—much faster than these investments wear out.

Netflix relied heavily on a single tax break — writing off the value of executive stock options for tax purposes — to zero out its tax liability not just in 2016 but in 2015 and 2013 as well. A June 2016 CTJ report found that 315 companies in the Fortune 500 disclosed receiving benefits from this tax break, which allows companies to write off stock-option related “expenses” they didn’t actually incur, in 2015.[3]

Qualcomm has enjoyed $583 million in research and development tax breaks over the past five years. The R&D tax credit has been criticized for rewarding companies for “research” they would have done anyway, as well as rewarding research in areas such as fast food packaging. [4]

General Electric has routinely used the “active financing” tax break as one of many ways that it eliminates its U.S. income tax bill.[5] This arcane tax break allows some multinational financial institutions to avoid paying income taxes to any government on their international financing activities. The Joint Committee on Taxation estimates the current five-year cost of this provision to be $48.2 billion.[6]

Corporate Tax Reform Should Start with the Hard Questions: Which Tax Loopholes Will Be Repealed?

In recent years, the public’s attention has been drawn to the elaborate tax avoidance mechanisms used by a few huge corporations such as General Electric, Apple, Microsoft and others. But as this report indicates, the scope of corporate tax avoidance goes well beyond these well-known companies and spans a wide variety of economic sectors. Moreover, the tax breaks that have allowed these companies to be successful in their tax avoidance are, by and large, legal and often have been on the books for decades.

Congress and the Trump Administration are expected to renew their focus on corporate tax reform sometime this year. While both congressional tax writers and the president have been eager to lead with cuts in the corporate tax rate, the sensible starting point should be to critically assess the costs of each existing tax break—including those discussed in this report— and take steps to ensure that profitable corporations pay their fair share of U.S. taxes.

The next step is just as important. Revenues raised from eliminating corporate tax subsidies should not be returned to corporations in the form of tax-rate reductions, as corporate lobbyists and their allies on Capitol Hill are aiming for. Instead, corporate tax reform should focus on raising revenue to address our nation’s fiscal priorities and make critically needed public investments in our nation’s future.

[1] Accelerated depreciation and the stock options loophole, and how Congress could raise revenue by repealing them, are described in Citizens for Tax Justice, “Policy Options to Raise Revenue,” March 8, 2012. http://ctj.org/ctjreports/2012/03/policy_options_to_raise_revenue.php

[5] As the New York Times documented, the director of GE’s tax department literally “dropped to his knee” when begging House Ways and Means Committee staff to extend the active financing tax break when it was set to expire in 2008. http://www.nytimes.com/2011/03/25/business/economy/25tax.html