Companies From Various Sectors Use Legal Maneuvers to Avoid Taxes

For decades, profitable Fortune 500 companies in a range of economic sectors have manipulated the tax system to avoid paying even a dime in tax on billions of dollars in U.S. profits—and the major tax cut recently enacted by Congress likely will allow this tax avoidance to continue. This ITEP report examines a diverse group of 15 corporations’ federal income tax disclosures for tax year 2017, the last year before the recently enacted tax law took effect, to shed light on the widespread nature of corporate tax avoidance. As a group, these companies paid no federal income tax on $24 billion in profits in 2017, and they paid almost no federal income tax on $120 billion in profits over the past five years. All but one received federal tax rebates in 2017, and almost all paid exceedingly low rates over five years. 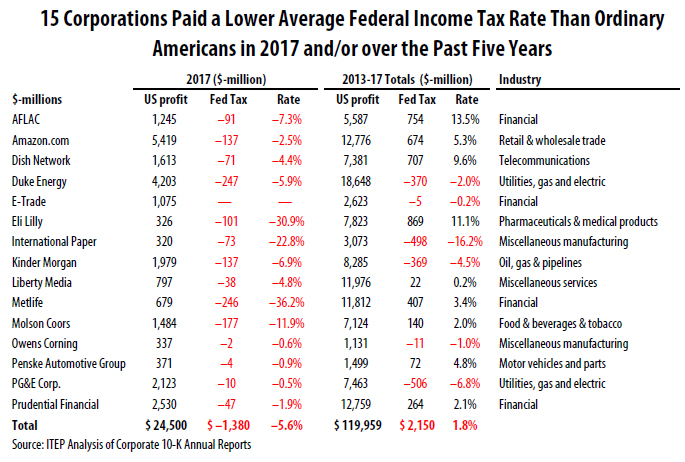 The companies profiled here represent a range of segments of the U.S. economy:

All 15 companies’ effective federal income tax rates for 2017 and the five-year period between 2013 and 2017 are shown in the table on the following page.

While the income tax disclosures made by these companies are too vague to allow a complete diagnosis of how they are avoiding income taxes, the businesses profiled here appear to be using a diverse array of tax breaks to reduce their federal income taxes:[1]

Duke Energy, International Paper and PG&E used accelerated depreciation, a tax break that allows companies to write off the cost of their capital investments much faster than these investments wear out to dramatically reduce their tax rates. Congress could have raised hundreds of billions of dollars a year by ending the accelerated depreciation tax break. But the tax legislation enacted in December of 2017 instead dramatically expanded the depreciation tax break which will likely allow these and other Fortune 500 corporations to more aggressively avoid taxes going forward.

Amazon relied heavily on a single tax break—writing off the value of executive stock options for tax purposes — to zero out its tax liability in 2017. E-trade also disclosed reducing its taxes using the stock option tax break. A June 2016 CTJ report found that 315 companies in the Fortune 500 disclosed receiving benefits from this tax break, which allows companies to write off stock-option related “expenses” they didn’t actually incur, in 2015.[2]

Metlife and Prudential Financial each used low-income housing credits among other breaks to reduce their effective tax rate in 2017.

Duke Energy reduced its income taxes by $132 million using renewable energy production tax credits in 2017 and has enjoyed $430 million in these credits over the past five years. Duke Energy also likely took substantial advantage of depreciation tax breaks to lower its rate.

Last fall, Congress and the Trump Administration hastily pushed through a huge corporate tax rate cut masquerading as “reform.” The new law sharply reduces the corporate tax rate from 35 to 21 percent. But instead of aggressively closing tax loopholes to pay for this rate reduction, the new law expands some of the biggest tax giveaways. In particular, the already-generous accelerated depreciation provisions have been expanded to allow immediate expensing of many capital investments. This means that many of the companies profiled in this report will likely be able to reduce their taxes every bit as effectively going forward as they have in the past five years.

Corporate tax reform remains an imperative. The nation’s already-low corporate tax revenues are set to fall even further as a result of the new tax law, and corporate lobbyists and their allies on Capitol Hill have already signaled their intention to continue pushing for even more special corporate tax handouts. It is vital that lawmakers not only resist lobbyists’ calls for more corporate giveaways, but also aggressively weed out the many unwarranted corporate tax breaks that were left untouched by the recent tax changes. Revenue-raising corporate tax reform can play an important role in addressing our nation’s fiscal priorities and making critically needed public investments.

[1] Accelerated depreciation and the stock options loophole, and how Congress could raise revenue by repealing them, are described in Citizens for Tax Justice, “Policy Options to Raise Revenue,” March 8, 2012. http://ctj.org/ctjreports/2012/03/policy_options_to_raise_revenue.php