Income Tax Offers Best Bang for the Buck in Alaska

Earlier this month the Alaska House of Representatives voted 22-17 in favor of implementing a personal income tax for the first time in over 35 years. Gov. Bill Walker praised the bill shortly after passage, citing its ability to “provide a steady source of funding for essential services like public education and state troopers,” and the need to “stop the draw on our precious savings” that the state accumulated during times of high oil prices.

But leaders in the Alaska Senate have taken a decidedly different position. Senate President Pete Kelly has pledged to “stonewall” the reinstatement of an income tax and recently wrote that “the only thing standing between you and an income tax is the Senate.”

But is this stonewalling doing Alaskans any favors? A new ITEP report shows that for most Alaskans, an income tax would be less costly than other revenue-raising alternatives such as cutting the state’s Permanent Fund Dividend (PFD) payout or implementing a statewide sales tax or payroll tax. Because an income tax would collect significant revenue from Alaskans with very high incomes, middle- and low-income Alaska families would not have to pay quite as much for the state to raise any target amount of revenue. 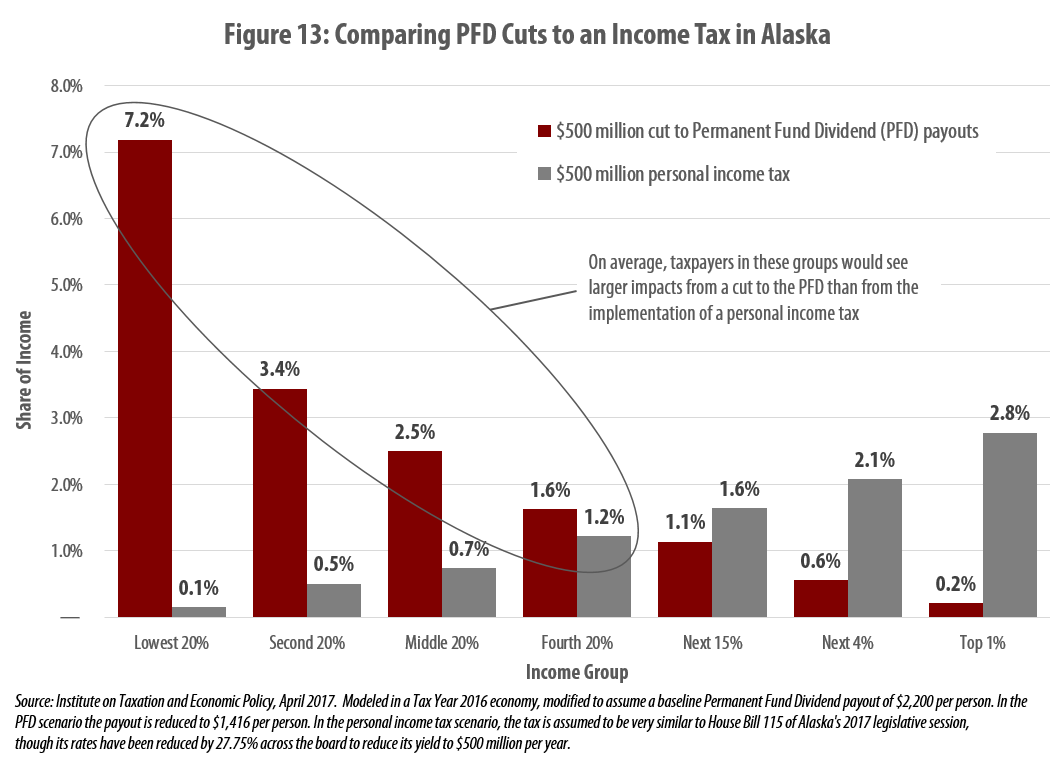 ITEP’s report examines five hypothetical policy options designed to raise equal amounts of revenue: $500 million per year to put toward closing the state’s budget gap. The report finds that for Alaskans across the bottom 80 percent of the income distribution, an income tax modeled after the one that recently passed the Alaska House of Representatives would have a smaller impact than either a cut to the PFD or a new payroll tax designed to raise the same amount of revenue. When comparing an income tax to a potential statewide sales tax, ITEP finds that the income tax option would be cheaper for Alaskans across at least the bottom 60 percent of the income distribution.

As the chart accompanying this post shows, PFD cuts fall hardest on Alaskans with very low incomes, for whom the PFD is critical in helping to make ends meet. High-income families, by contrast, would have trouble even noticing a reduction in their PFD. A PFD cut designed to raise $500 million for public services, for instance, would cost the top 1 percent of Alaska earners just 0.2 percent of their overall income.

An income tax, by contrast, could be designed to require relatively low payments from families in or near poverty, and higher payments from wealthier Alaskans most able to afford a higher tax bill.

While a true solution to Alaska’s fiscal problems is sure to include a mix of various policy changes, this report should help to illuminate what different mixes would mean for different Alaskans. In particular, middle- and low-income Alaskans should know that under a fiscal package of any given size, balancing that plan to rely more on income taxes and less on PFD cuts is likely to be in their own financial best interest.