New estimates from ITEP show that Julián Castro’s refundable tax credit proposal would mostly benefit the bottom 60 percent of households and would have a cost ($195 billion in 2020) that places it roughly in the middle of the different tax credit proposals that Democrats have offered over the past several months.

Castro, the former Secretary of Housing and Urban Development and a Democratic presidential candidate, released his proposal to expand the Earned Income Tax Credit (EITC) and Child Tax Credit (CTC) last month, along with other details of his tax plan that ITEP has not yet analyzed.

The Working Families First Credit proposal would increase the CTC from $2,000 to $3,000 and remove the limits on refundability that prevent many lower-income families from receiving the entire credit. It would also lower the income level at which the credit begins to phase out from $400,000 to $200,000 for married couples (from $200,000 to $150,000 for single parents) and this change is the reason the top 5 percent would receive a tax increase on average.

The proposal would also expand the EITC by increasing the rate at which earnings are credited. Childless workers would get a particularly significant boost. Under current law, the EITC provides those without children living with them very little, a maximum credit of just more than $500. Castro’s proposal would increase that to almost $3,200 in 2020.

Castro’s proposal would also make certain changes to the EITC that ITEP is not yet able to model, such as allowing students and filers using an Individual Taxpayer Identification Number (ITINs) to claim the EITC and expanding it to allow credit for other dependents besides children.

ITEP has recently analyzed several proposals to expand refundable tax credits or create new ones. These proposals all vary a great deal and, as we have explained, they take different approaches and solve different problems. Some provide larger benefits overall, while others provide more targeted benefits to help specific groups like children or working people. The most expansive, Rep. Rashida Tlaib’s BOOST Act, is the only proposal that would provide tax credits to low- and moderate-income households even if they do not have children or earnings, based on the idea that those without earnings are the most in need of help.

The least expensive so far would be the Economic Mobility Act, approved by the House Ways and Means Committee in June, which ITEP estimated would cost $62 billion in 2020. The most expensive would be Rep. Tlaib’s BOOST Act, which would cost $380 billion in 2020.  The bottom 60 percent of taxpayers would receive an average benefit of $510 under the Economic Mobility Act compared to $3,150 under the BOOST Act.

Castro’s Working Families First Credit would fall roughly in the middle of the different proposals in terms of its cost, $195 billion in 2020, and its benefits, which would average $1,680 for the bottom 60 percent of taxpayers in 2020.

All these tax credit proposals would be the inverse of the tax cuts enacted by President Trump and Congress in 2017 in terms of how their benefits would be distributed. The Tax Cuts and Jobs Act (TCJA) will provide just 14 percent of its benefits to the bottom 60 percent of taxpayers in 2020 and will provide 72 percent of its benefits to the top 20 percent. (This is not even counting tens of billions that TCJA provides each year to foreign investors who gain from the law’s corporate income tax cuts.)

The tables below provide more details about how different proposals, including Castro’s Working Families First Credit, would modify the EITC and CTC.

Child Tax Credit Under Current Law and Proposals in 2020

Earned Income Tax Credit Under Current Law and Proposals in 2020 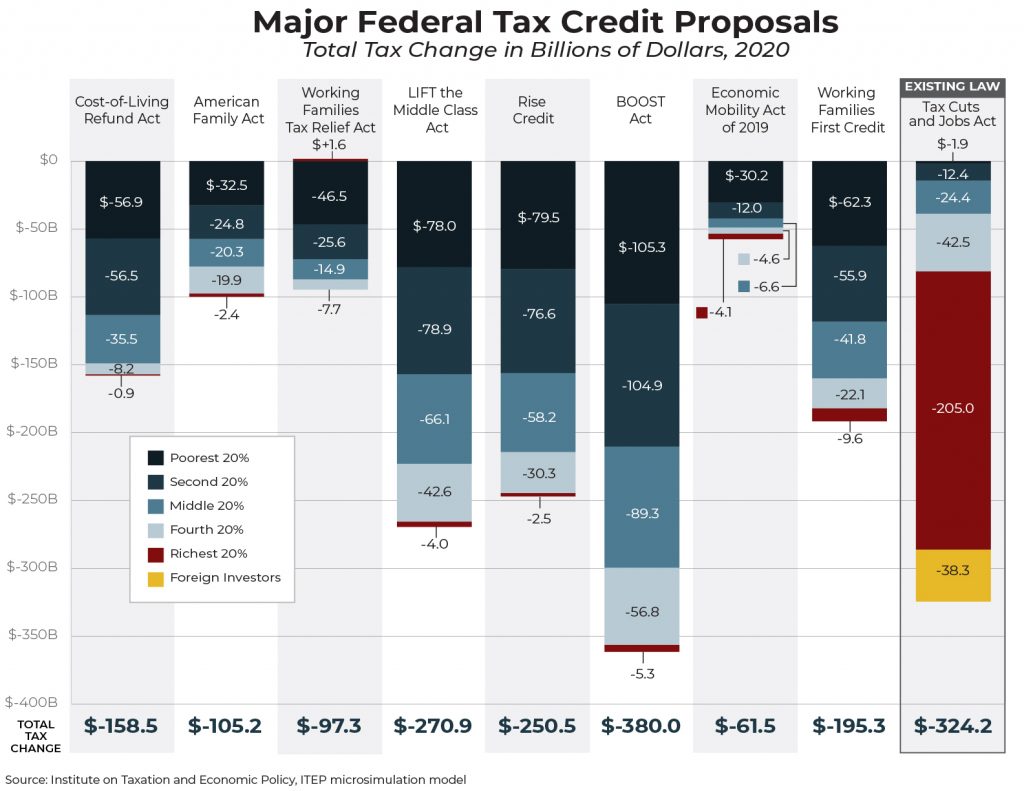