For years, one of the driving forces in the corporate tax debate has been how to best deal with the ever-growing stash of Fortune 500 multinationals’ profits being booked offshore, which as of this year stands at more than $2.6 trillion. According to an analysis by the Institute on Taxation and Economic Policy (ITEP), companies owe an estimated $752 billion in taxes on these offshore earnings.

For scoring purposes, the repatriation proposal is being portrayed as a revenue increase, but this is only true when measured over the next 10 years. Over the long-term, this measure could be a revenue loser, and thus using this short-term revenue boost to pay for long-term tax cuts is an accounting gimmick.

The companies that would benefit most from this low-rate deemed repatriation are precisely those companies that have been the most aggressive in their use of offshore tax avoidance schemes. As seen in the chart below, the top 5 companies that publicly disclose how much they owe on their offshore earnings would collectively save $89.4 billion from a 15.5 percent deemed repatriation rate. Given that a substantial portion of their earnings are likely to be taxed at the lower 8 percent rate, the estimates below represent the most conservative estimate of how much these companies could benefit from the repatriation proposals. 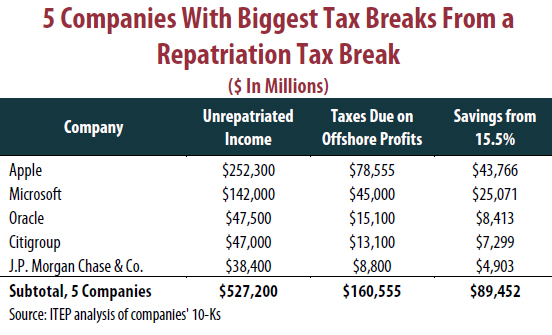 Which Companies Benefit the Most

The biggest beneficiary of the deemed repatriation proposal would be Apple, the company now most notorious for its international tax avoidance. Under current rules, Apple should pay $78.6 billion in taxes when its $252.3 billion in earnings being held offshore are repatriated. This calculation is based on the estimated 3.9 percent tax rate the company has paid to other governments on its offshore earnings. The statutory corporate income tax rate is 35 percent, and the corporate tax code reduces that rate based on the percent already paid. So under current law, Apple would be subject to a 31.1 percent tax on these earnings upon repatriation. In contrast, a deemed repatriation of 15.5 percent would allow the company to pay just $34.8 billion, representing a $43.8 billion tax break compared to the $78.6 billion it would otherwise owe.Which Companies Benefit the Most

Some of the nation’s largest financial companies would also benefit handsomely from the Senate plan. Citigroup would enjoy a $7.3 billion tax cut, while JP Morgan Chase would see a $4.9 billion tax break.

Making Corporations Pay What They Owe

Rather than allowing corporations to receive a substantial tax break on their offshore earnings, lawmakers should require that these companies immediately pay the full 35 percent (minus foreign tax credits) that they owe. Many companies not engaged in offshore tax avoidance routinely pay the full rate. Furthermore, it should be noted that a significant portion of these offshore earnings represent U.S. earnings that have been shifted offshore using accounting gimmicks.

Requiring companies to pay the full rate that they owe would raise around $752 billion in much-needed revenue, which is several times the yield of the proposed Republican repatriation proposal. This additional revenue would be much more useful to the country if it were used to pay for critical public investments, rather than squandered to pay for a tax rate cut that will have the effect of further subsidizing corporations’ already high profits.