A new report from ITEP finds that taxes people pay directly would stay the same or go down in 2022 for 98.1 percent of Americans under Democratic presidential candidate Joe Biden’s tax plan. Corporate taxes would go up which could indirectly raise taxes on individuals, but the effects for low- and middle-income people would likely be insignificant or offset by other tax cuts in his plan.

The plan would raise personal income taxes or payroll taxes on just 1.9 percent of taxpayers in 2022. The share paying more would vary slightly by state, from a high of 3.7 percent in Connecticut to a low of 0.6 percent in West Virginia.

The five states with the lowest share of taxpayers facing a tax increase from these proposals are West Virginia, Mississippi, Arkansas, New Mexico and Kentucky.

The five states with the highest share are Connecticut, New Jersey, Massachusetts, California and New York (and Washington, DC).

This result is unsurprising. States with more high-income individuals would have a larger share of residents who pay more under Biden’s plan. But even in the richest states, the share with personal income tax increases or payroll tax increases would be less than 4 percent.

Biden has also proposed cuts in the personal income tax, which ITEP has not yet analyzed. These tax cuts would generally benefit those with incomes below $400,000 and not the taxpayers that we identify as paying more under his plan. 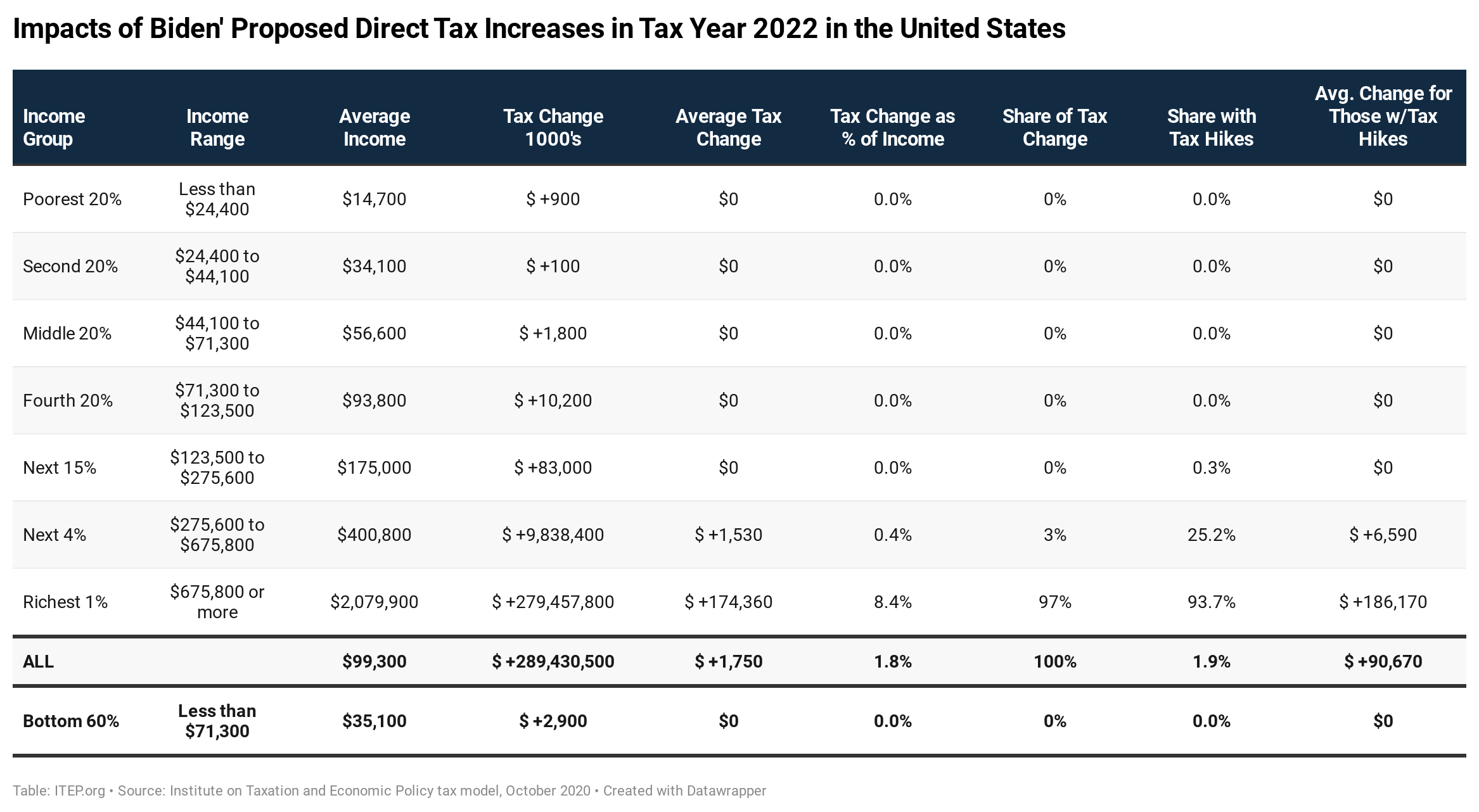 So why are some of Biden’s opponents claiming that a much larger number of people would pay more under Biden’s plan? To the extent that their claims are based on any facts at all, Biden’s opponents are referring to indirect tax increases, meaning increases in the corporate income tax.

Biden’s proposals to increase the personal income tax and payroll tax can be thought of as direct tax hikes because people pay these taxes directly. Our finding that only 1.9 percent of taxpayers in the U.S. would be affected by these direct tax increases is in line with what other analysts have found.

Biden also proposes to hike the corporate income tax in several ways, and this could result in an indirect tax increase on individual Americans. The corporate income tax is ultimately borne by people, but there is some debate over which people. Some believe that a small portion is eventually paid indirectly by working people in the form of lower wages. It is unclear whether this really happens, and it certainly does not happen in the short-term (as demonstrated by the Trump corporate tax cuts, which have not trickled down to workers). ITEP follows Congress’s official revenue estimator in assuming that during the first year after a corporate tax hike is enacted, it is borne entirely by the owners of corporate stocks and other business assets because smaller profits are passed onto them.

Some of these corporate stocks and business assets are owned by foreign investors. Some are owned by Americans at different income levels but–by far–most are owned by the well-off.

In other words, the corporate income tax increases that Biden proposes could be felt indirectly by individuals at different income levels, but the significant impacts would be felt by the well-off.

For most low- and middle-income people, these indirect tax increases would be insignificant or they would be offset by tax cuts in Biden’s plan.

While ITEP has not analyzed all of Biden’s proposed tax cuts, we have analyzed a significant one, his proposal to expand the Child Tax Credit, which is borrowed from the House Democrats’ HEROES Act.

We find that for low- and middle-income people, the expansion of the Child Tax Credit would, on average, more than offset any indirect tax increase resulting from Biden’s proposals to raise the corporate tax rate and shut down offshore tax breaks (the most significant, by far, of his proposals to hike corporate taxes).

The expansion of the Child Tax Credit of course only benefits those with children. However, the Biden plan includes many other tax breaks to help low- and middle-income people in various stages in life, including childless older workers, renters, first-time homeowners, people paying off student loans, and people trying to save for retirement, among others.

The bottom line is that taxes that people pay directly–either by filling out a tax return or by having taxes withheld from their earnings–would not go up for 98.1 percent of Americans. Corporate taxes would go up, but the effects for low- and middle-income people would be either insignificant or offset by tax cuts in Biden’s plan.