President Trump’s Corporate Tax Outline: At Least He Didn’t Use a Napkin 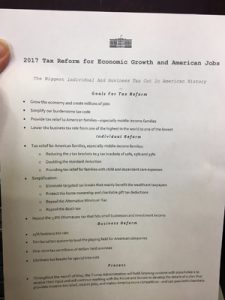 The most complimentary thing that can be said about the corporate tax changes outlined by President Trump earlier this week is that they weren’t scribbled on a napkin. Unlike supply-side architect Arthur Laffer, who infamously sketched out his explanation for why tax cuts can somehow pay for themselves in this manner, the Trump Administration took the trouble to fill an entire page (generously double-spaced) with information about how the president proposes to cut taxes as part of his as-yet-unwritten detailed tax plan later this year.

But while the president’s one-pager is clear on the easy questions—he says he’d cut the statutory corporate tax rate from 35 percent to 15 percent, making our corporate tax rate among the lowest among developed nations—the document is virtually content free on the hard question of how this tax cut will be paid for. The document says only that the plan will, “eliminate tax breaks for special interests,” without naming even a single tax break that would fall into that category or giving a sense of how universal that effort would be.

Far from filling the $2.2 trillion 10-year budget hole that would be created by cutting the corporate rate to 15 percent, in fact, Trump’s one-pager digs the hole deeper by proposing a move to a territorial tax system, opening the door for rampant tax avoidance by permanently exempting any income companies claim they earn offshore. And even the one apparent “revenue raiser” in Trump’s corporate outline (a one-time tax on the $2.6 trillion companies are currently claiming to hold offshore) should be thought of as a revenue loser, since these profits ought to be taxable at a rate closer to 35 percent than the 10 percent transition tax Trump has proposed in the past.

At a time when U.S. corporate tax collections are near historic lows as a share of the economy due to pervasive tax avoidance, and when the country faces persistent budget deficits, the first step toward corporate tax reform should be a detailed plan for ending wasteful corporate tax dodges, putting a name on each specific tax break that is deemed unaffordable or ineffective and identifying a plan for reform—or repeal. This week’s corporate tax outline sends a clear signal that the Trump administration is not at all serious about taking even this first step toward true reform, and is likely bent on simply pushing through exactly what Trump promised last week: “maybe the biggest tax cut we’ve ever had.”