Seeking the Right Balance in Alaska

It’s been a little over a year since Alaska Gov. Bill Walker proposed implementing a state personal income tax for the first time in 35 years, and the idea is now receiving close attention in the Alaska House of Representatives. 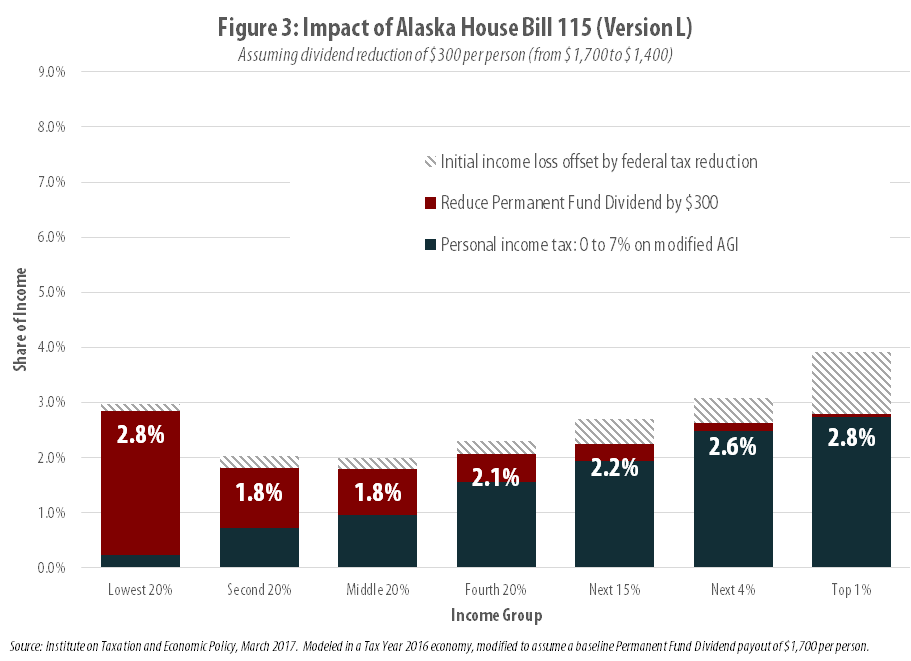 Alaska is the only state to repeal a personal income tax, having done so after it struck oil at Prudhoe Bay in the 1970s. Since then, the state has funded its public services primarily with oil tax and royalty revenues. But this unusual setup has proven unsustainable now that oil prices and production levels have both dropped. Alaska is confronting a $3 billion shortfall—a massive amount in a budget of just $4.3 billion.

To end this fiscal calamity, the co-chairs of the Alaska House Finance Committee unveiled a plan (House Bill 115, Version L) that would, among other things, implement a personal income tax with graduated rates ranging up to 7 percent. In an analysis provided to the committee, ITEP found that this tax would collect less than 1.7 percent of Alaskans’ overall personal income, making it the fourth lowest among the 41 states with broad-based personal income taxes.

Despite its small size, the income tax would play at least two very important roles. First, it would generate roughly $680 million in revenue to put toward closing the state’s $3 billion budget shortfall. Second, the progressive nature of this income tax would add some much-needed balance to a plan that also includes a change heavily impacting the state’s low- and moderate-income residents: a significant reduction in the state’s Permanent Fund Dividend (PFD) payout.

Alaska’s PFD is unique among the states. The payment, which typically ranges from $1,000 to $2,000 per person, per year, is received by the vast majority of Alaska households as a way of allowing them to share in the state’s natural resource wealth. But while Alaskans of all stripes are eligible for the PFD, low-income families typically find the income that the PFD provides to be much more important to their ability to make ends meet. Researchers at the University of Alaska Anchorage estimated that the PFD lifts between 15,000 and 25,000 Alaskans out of poverty each year. Among Alaska’s children, the PFD is responsible for reducing the state’s poverty rate from 16.4 to 10.0 percent. For a family of four on the brink of poverty in Alaska (with a household income of $30,750 in 2017), the difference between a receiving a $1,000 PFD payout versus a $2,000 payout represents a sizeable 13 percent gain, or loss, in their household budget.

It appears that a consensus is forming that despite the PFD’s benefits, the payout will have to be scaled back as part of a plan to remedy the state’s dire fiscal situation. Gov. Walker cut the state’s 2016 PFD payout roughly in half, and the Alaska Senate is hoping to rely heavily on reductions in future PFD payouts to fund the state’s budget. But as the Governor and House leadership have recognized, leaning too heavily on PFD cuts would amount to balancing the state’s budget primarily on the backs of low- and middle-income families. A robust personal income tax is vital if lawmakers are to ensure that the state’s most affluent residents also chip in toward a solution to the state’s fiscal problems.

This fact is demonstrated in a new ITEP analysis showing that the House’s fiscal package “when fully implemented … achieves a relatively consistent impact across every income group in Alaska.” In other words, families at different income levels would be asked to contribute similar shares of their incomes toward putting the state’s budget back on a stronger footing. ITEP’s analysis finds that the long-run impact on Alaska families across the income distribution would vary between 1.8 and 2.8 percent of income, on average.

But the bill would take a heavier toll on low-income families in the short-run, when the cuts to the PFD would be the deepest. In a scenario where the PFD is cut by $950 per person, as this bill could do in its first year of implementation, the bottom 20 percent of Alaska families could expect to see their incomes drop by an average of 8.6 percent.

Nonetheless, this plan is more favorable to both low- and middle-income families than most of the alternatives. Unless Alaska adopts an income tax, deeper cuts in state spending or the PFD payout, or new sales or excise taxes, will be needed. Any of these options would have an even larger negative impact on families of modest means. Simply put, if legislators proceed with a fiscal fix that does not include an income tax, a lopsided outcome that asks far less of the wealthy and far more of everyone else is all but guaranteed.