Sorting Through the Fallacies in Trump’s Missouri Tax Speech 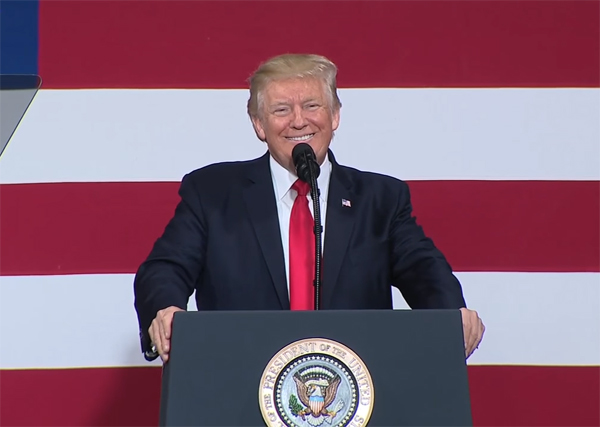 President Donald Trump spoke in Springfield, Mo., today about the need for a tax reform that provides “more jobs and higher wages for America” and “tax relief for middle-class families.” But proposals the Trump administration have released would cut taxes for companies moving investment offshore and provide most tax cuts to the richest 1 percent of taxpayers.

The only formal Trump tax proposal so far is a single, double-spaced page of tax reform principles that the administration released in April. Based on those principles and statements of administration officials, the Institute on Taxation and Economic Policy has estimated that Trump’s tax-cutting agenda would cost $4.8 trillion over a decade and more than 61 percent of the benefits would go to the richest 1 percent of households. The bottom 60 percent of American households would receive just 10 percent of the tax cuts and average $400 in 2018. 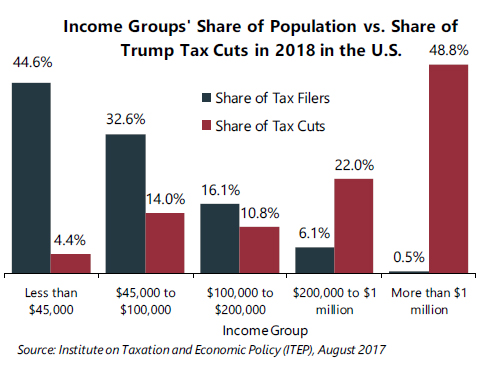 In fact, nearly half of the tax cuts under Trump’s tax principles would go to millionaires. ITEP projects that only 0.5 percent of American households will have incomes greater than $1 million next year, but this tiny, elite group would receive 48.8 percent of the tax cuts (averaging $217,790) if Trump’s proposals are in effect.

Trump proposes a “territorial” tax system, which means that offshore profits of American corporations would be exempt from U.S. taxes. Far from helping American workers, a “territorial” tax system would allow U.S. corporations to reap tax savings any time they move investments to a country with a lower tax rate, or (more commonly) use accounting gimmicks to make their profits appear to be earned in a country with a lower tax rate.

The U.S. Has Some of the Lowest Taxes in the World

Trump claimed that because American corporations pay an official tax rate of 35 percent, they are at a disadvantage when competing with corporations headquartered in countries with lower tax rates. He did not mention that 35 percent is the statutory U.S. corporate tax rate, and that the effective corporate tax rate (the share of profits that corporations pay in income taxes) is far less because of the many loopholes and special breaks throughout the tax code.

A recent study from ITEP examines a particularly profitable group of corporations – the Fortune 500 corporations that were profitable each year from 2008 through 2015. Even among these  companies, the average effective tax rate during those years was only 21.4 percent. There were several with effective tax rates that were close to zero or below zero for the eight-year period. 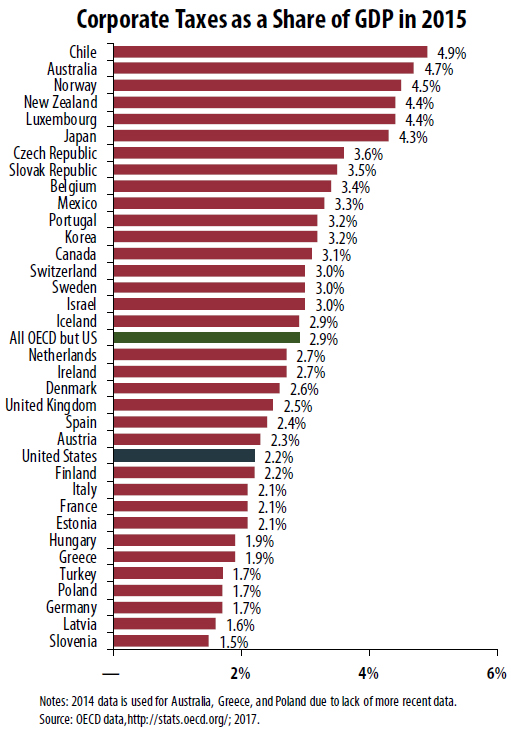 A 2016 study produced by the Government Accountability Office (GAO) examined the effective tax rate paid by large profitable American corporations in each year from 2008 through 2012. (The GAO study was not limited to Fortune 500 companies or to companies that were profitable in all of those eight years, as the ITEP study was.) The GAO found that the corporations in its report paid an effective tax rate of just 14 percent. It found that the share of these corporations paying no federal income tax at all was 19.5 percent in 2012 and 24.1 percent in 2011.

Trump Claims Growth Will Be 50% Higher than Mainstream Economists Project

Trump also claimed that his tax reform proposals would help boost economic growth to 3 percent this year, whereas the Congressional Budget Office (CBO) and most other economists predict growth of around 2 percent. That may sound like a minor detail, but given the size of the American economy the difference involves trillions of dollars. Trump’s allies in Congress believe this justifies ignoring massive budgetary problems that would seem to result from enacting trillions in tax cuts without offsetting the costs.

As ITEP explained in a report earlier this summer:

Using smoke and mirrors such as unrealistic promises of economic growth to mask the costs of tax cuts and assuring working people that top-heavy tax cuts will eventually trickle down is not a sound way to make public policy. We do, however, have the benefit of history lessons. What we know for sure is the tax cuts enacted by George W. Bush did not make America more prosperous, and the tax increases enacted by Bill Clinton did not weaken our economy. There is simply no evidence that the lower taxes proposed by Trump will grow our economy. And there is certainly no reason to believe that tax cuts for the richest 1 percent will have benefits that “trickle down” to the forgotten Americans that Trump speaks of so often.